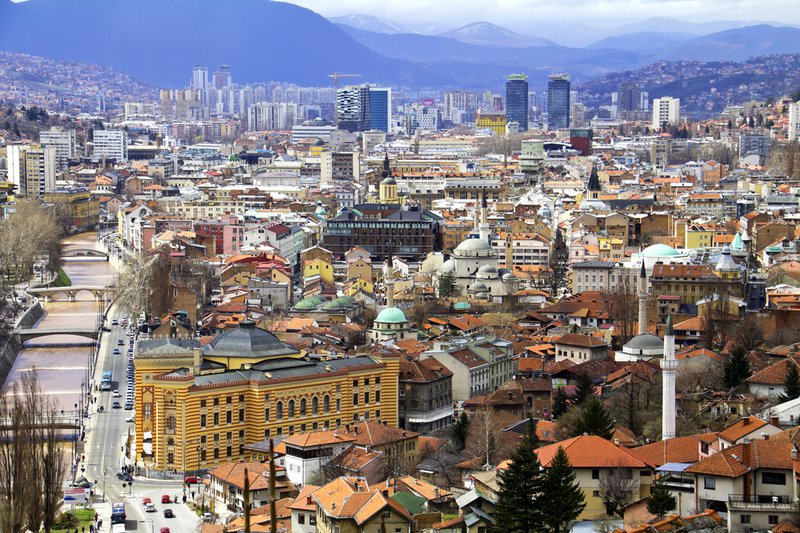 It’s been 20 years since the signing of the Dayton Peace Accords, the agreement that put an end to the four-year long war in Bosnia-Herzegovina. As an effort at peacemaking and peacekeeping, the agreement has doubtlessly been one of the most successful and durable in modern history.

However, Annex IV of the Accords serves as the constitution in post-war Bosnia-Herzegovina, and as a constitution, Dayton has been a study in social and political entropy. Today, it is this latter feature—the exhaustion of Dayton’s constitutional capacities—which threatens to unravel the compact as a whole, and, with it, potentially the entirety of southeastern Europe.

In hindsight, Dayton’s flaws should have been obvious from the outset. In order to silence the guns of the assorted nationalist bands that had torn the country apart, Dayton’s American architects made a deal with the devil. Bosnia-Herzegovina would survive as a single, internationally-recognized state.—but internally the country would be (and indeed has been) fragmented at virtually the atomic level among its three so-called “constitutive peoples”: the Bosniaks, the Serbs, and the Croats.

Bosnia-Herzegovina was partitioned, as had been the primary objective of the war’s chief instigators: the hard-line nationalist establishments in Belgrade, and later Zagreb. Accordingly, the country’s new administrative boundaries followed the contours of some of the worst crimes committed during the war’s horrific duration.

At Dayton, Bosnia-Herzegovina was fractured between two entities, ten cantons, one district, and over 143 municipalities. A weak central government was established in Sarajevo, but with most powers devolved to the two entities: the Federation of Bosnia-Herzegovina, the population of which was and remains mostly Bosniak and Croat, and the Republika Srpska, which, after four years of ethnic cleansing and genocide, was primarily composed of Serbs.

Further, Dayton specified that all those filling government posts, from bureaucrats to elected officials, had to be self-declared Bosniaks, Serbs, or Croats. A three-member rotating presidency was likewise established, its composition not only ethnically but also geographically determined. That is, a Serb living in the Federation could not be elected as the Serb representative in the presidency, nor could Bosniaks or Croats in the Republika Srpska be elected to represent their respective communities. Non-constitutive peoples, meanwhile, like the country’s historic populations of Jews and Roma, or anyone opting not to identify as one of the three “constitutive peoples” (literally referred to as “Others”) were barred from the presidency altogether.

There have been repeated rulings against these practices at both the European and local level, yet they persist. The respective nationalist camps are simply uninterested in reforming the constitution in line with the country’s international human rights obligations. As a result, despite frequently being described as a “protectorate” of the international community and the E.U., the contemporary reality of Bosnia-Herzegovina is that it is a black hole of law and order—and thus a scathing indictment of the E.U.’s inability to secure its neighborhood.

One could argue that there is essentially an institutional impossibility of reform within the existing parameters of the country’s constitutional regime. Consider that even when civic- and reform- oriented parties have done well in the polls, they have been essentially barred from governing by their nationalist opponents, who are still able to dictate events through their frequent use of Dayton’s robust veto opportunities. Accordingly, Asim Mujkić, a Bosnian political scientist, has referred to post-Dayton Bosnia-Herzegovina as an ethnopolis; a society in which, “under cover of the legitimacy conferred by free and fair elections, citizens as individuals are stripped of any political power.”

Mujkić suggests that Dayton negates the very idea of citizenship, at least as it is commonly understood in most liberal-democratic states, which is to say, citizenship as based in universal rights and obligations, rather than in ethnicity. In this respect, and as other scholars have suggested, by insisting on exclusionary ethnic categories as preconditions for the right to political participation and legal equality, Bosnia-Herzegovina’s contemporary constitutional order has more in common with an apartheid regime than with a genuine representative democracy.

The sum of this constitutional policy of discrimination, however, is not merely legal disenfranchisement for the country’s minorities. It is a matter that goes to the heart of the “criminal-political nexus” that has starved the hopes and ambitions of ordinary Bosnians and Herzegovinians for a brighter future.

The war-time economic collapse of Bosnia-Herzegovina still casts a long shadow over the country, with unemployment rates somewhere between 30 and 40 percent, and a staggering 60 percent among youth. But it is post-war plunder that has truly stymied the country’s recovery. Bosnia-Herzegovina has fourteen different governments operating on its tiny territory, with vast and competing public administrations staffed almost entirely by political appointees, individuals whose positions are granted on the basis of personal and political allegiances. The effects of such policies can be seen in the disastrous state of nearly every public economic sector. Everything from Bosnia-Herzegovina’s health care system to its transportation infrastructure is on the brink of collapse.

Corruption is also endemic; indeed, the purpose of the politically-appointed public administration in Bosnia-Herzegovina is to expedite and normalize such practices. Any attempt to fundamentally reform the country’s institutions or public administration is categorically obstructed by nationalists, who paint these efforts as “attacks” on the communities they purport to represent. In the process, they obscure, of course, their own leading roles in the economic dispossession of these same communities whose causes they champion.

The growing inequality engendered by this entrenched clientelistic and kleptocratic economy came into full view in February 2014, when the country exploded in the worst civil strife since the war. Only it was not ethnic cleavages that were driving the protestors to torch government buildings across the country, and thereafter to organize and participate in ad hoc public assemblies, calling for the ouster of elected officials and their associates. Instead, it was the widely-held belief of the citizens that their leaders had lost their democratic legitimacy to govern. In effect, by insisting on an exclusionary ethnic peace, Dayton had—and has—ensured social conflict.

The protests and the subsequent public assemblies did not last very long. It would be a mistake, however, to conclude from this that the events of February 2014 failed to change Bosnia-Herzegovina. Aside from the wave of resignations that followed, and a handful of legislative changes, the primary contribution of the so-called “Bosnian Spring” protests was to act as a vision of the future. The protests were a warning to country’s leaders and their international backers, scrawled clearly also on the walls of the burnt-out husk of the Sarajevo Canton building: “Sow hunger, reap fury.”

Dayton has been both peace agreement and constitution, but it has never truly been a social contract. It has made the country not only ill-suited for E.U. and NATO membership but, in a sense, ill-suited for sovereignty as such. Worse still, the comparative geopolitical lull of the last two decades in Europe has now definitively dissolved as the wars in Ukraine and Syria increasingly destabilize continental and regional security, adding even greater urgency to the task of genuinely democratizing the post-war Bosnian-Herzegovinian state. There are surely some who believe that instability elsewhere means Bosnia-Herzegovina should not be a priority. These individuals have forgotten how quickly the country can destabilize the region and, in turn, Europe.

In this respect, the recent British-German initiative to reward reforms with real progress towards the E.U. has been a positive step forward. But, as was noted in a recent open letter to E.U. and U.S. policymakers, much more international attention toward Bosnia-Herzegovina is needed. Not because it is the responsibility of the international community as such to “fix” the country, but because European security vitally depends on genuine democracy taking root in the Balkans. But this can only occur when the international community decisively commits itself to supporting progressive and democratic forces in Bosnia-Herzegovina, which are today suppressed as much by the country’s current elites as by the constitution itself.

To be clear, the unravelling of the current constitutional order in Bosnia-Herzegovina is already well underway. It only remains to be determined whether its final collapse will be orchestrated by agents of chaos or agents of progress.