The Past, Present, and Future of the Black Lives Matter Network 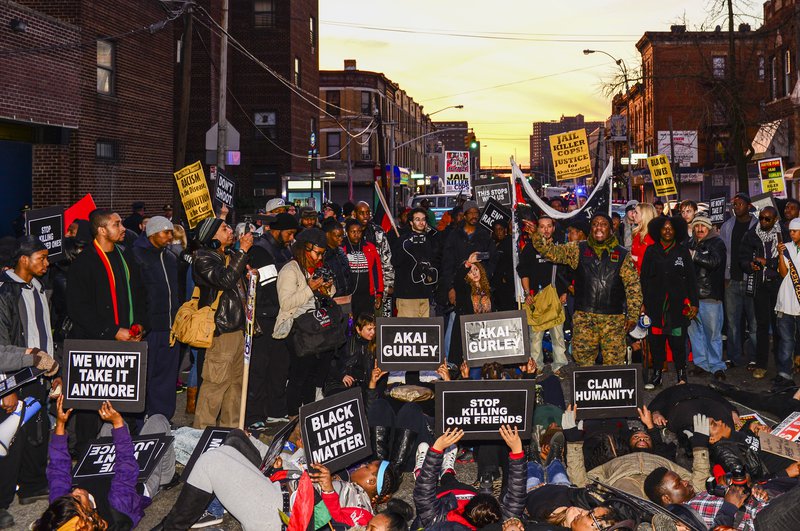 You won’t see Cathy Hughes or her son Alfred C. Liggins III named in recent headlines about Michael Brown and Ferguson, Missouri. Sherrard Burton, Lee Bailey, and brothers Tuckett and Michael Waite have not been commanding candidates’ attention about how their presidencies will make Black lives matter. We don’t associate these folks and others like them with the more visible, more vociferous and more technologically mediated fight for racial justice that many dub the “new civil rights movement.” But we should know their names; they represent the many Web designers, software engineers, digital and media entrepreneurs of color whose pioneering work in the early days of the Internet powerfully contributed to today’s digital movement.

What’s new about the present movement is that a new generation of activists comprises its front lines. This younger cohort favors distributed leadership over following individual leaders and holds the civil rights establishment at arms length. More importantly, their efforts are distinguished by their ability to master and marshal digital technology to mobilize people and resources. Their pioneering efforts both innovate and stand on the shoulders of decades of organizing in the streets and online and are an early indication of how the movement will evolve in the coming years.

And they’re getting results. Consider that BlackLivesMatter.com alone eclipses, on average, all member civil rights organizations that make up the coalition of the Leadership Conference. Content from the BlackLivesMatter.com homepage (created on July 7, 2013) has been shared fourteen times more than the collective others, and its overall traffic rank (MozRank) eclipses fifty-one (out of 59) other sites. Accomplishing this level of visibility and circulation in such a short period of time (especially when rankings weight site longevity so heavily) reveals a sophisticated understanding of the Web’s social structure and audience economy. The principals of Black Lives Matter exercised considerable technological erudition to capitalize on and exploit the network infrastructure that existed when it burst onto the scene.

But it is important to know the origins, complexity and sophistication of what I refer to as the movement network, the current linkages between websites and social media channels that distribute content by, about and in the interest of Black Lives Matter and the broader movement that bears its name. If we fall prey to a technological myopia that obscures the Black Lives Matter movement’s digital past, we risk muting the impact of its present and future significance.

Future allies to today’s Black Lives Matter movement have been blazing the technological trail since the 1990s. How did we get here from there? Understanding how these digital pathways and networks first formed and developed over the past two decades reveals key reasons why today’s racial justice movement flourishes online.

Sites distributing the Black Lives Matter message today are actually pretty old (remember, the Internet went public around 1992 and the Internet usage gap between blacks and whites had all but disappeared by 2000). Some, (like aidamanduley.com) are mere infants, arriving just two months ago. But the oldest (such as MTV.com) have been around for 21 years, and more than half date back at least a decade. The volume of content shared by these sites palpably demonstrates how site longevity contributes to the movement’s present success in distributing content. There is a clear correlation; older sites equal more shares. Median number of shares from sites ten years older and more equal 1,757 compared to 150 from those younger.

As important as site longevity is, however, it takes a network to build a movement. Over the past year, I have sampled the vast network of sites linking to Black Lives Matter (through its website, a hashtag or its various social media channels) and using website “birthdates,” reverse engineered the present network. What I have found by comparing the movement networks of 1999 and today is that this movement was not created spontaneously; it was engineered and evolved over time.

Today’s online movement network, which features strategic and spontaneous relationships among its hubs, grew from a collection of disparate sites that existed in the late 1990s. While 15 percent of sites in today’s movement network existed in 1999, barely one percent of the total connections that bind these sites together today existed back then.

Lacking connective tissue, the 1999 network was impotent to pursue common ends in the way that the Black Lives Matter network fuses local and national concerns, but it was beginning to organize potential connections. Legacy cultural publications like Essence and Ebony, as well as pioneering, exclusively digital sites like AllAfrica and NewsOne were increasing the reach of online content to Black readers and paving the way for the future significance of the music and pop culture sites like BET and RadioOne to increasingly non-white web users.

The possibilities for extended reach to black web users were also emerging in the traditional news media sites dotting the Web in the late nineties, and the newly-minted blogs and news aggregators spanning the ideological spectrum (from Salon.com to the Drudge Report). Sites like Human Rights Watch and federal government information sites were planting the seeds for future digital connections between advocates and powerbrokers.

In the late 1990s, these sites were hanging loose—maximizing digital tools, cultivating audiences and spaces for people of color to congregate, and expanding the public sphere available to discuss and critique the significance of race. They were waiting for the evolutionary leaps that would provide both the impetus and the concrete pathways to connect and collaborate to advance racial justice.

Networks mutate, and the connections they form shape their identity and what they are poised to do. This critical process began for today’s Black Lives Matter network between 2006-2011, when the percentage of network connections increased most dramatically. In my analysis, I discovered that two sites with surprising and contrasting politics—FeministWire and GatewayPundit—were primarily responsible for mediating this connective growth. Both highlight two of the movement’s defining organizing characteristics: intersectionality and ideological antagonism.

As a critical online hub, TheFeministWire.com brands the network as intersectional and staunchly feminist. Founded in 2010 by a collective of academics and writers set out to critique the myriad forms of feminism, the site expands the movement’s reach by providing multiple points of connection and exchange for individuals and groups with different social, racial and political identities. The site’s ego network (the site itself and its direct connection to other sites) reveals strong connections to four primary communities: feminist (through other sites like Feministing.com), religious (e.g., uuse.org), progressive, leftwing (e.g., Truth-Out.org and TheNation.com), and the academy (folks with advanced degrees connected to higher education institutions pervade these sites as content producers).

GatewayPundit.com, whose owner and content are fiercely conservative and libertarian, emerged in 2004; it serves as a gateway to virtually every major rightwing site. Since its inception, the site has frequently produced content about racial issues and controversies. Although its framing of racial issues contrasts sharply with much Black Lives Matter content, the site’s network presence is important as the movement’s opposition, interlocutor, and foil. GatewayPundit.com consistently expresses the contrary positions and policies that define the terms of debate. This ensures that the Black Lives Matter movement’s message and prescriptions for change do not exist in a vacuum.

By consistently keeping allied political communities connected and helping opponents to organize controversial counterarguments, FeministWire and GatewayPundit respectively laid the groundwork during the mid-2000s for a receptive, networked response to later developments in the movement for racial justice: Black Twitter, cell phone videos going viral, and the tragically persistent occurrences of violence against Black Americans.

While infrastructure is critically important, it is also useless without agency. Key activist figures in the Black Lives Matter movement engineered our present moment by both cultivating and exercising the necessary technological expertise, and demonstrating the political savoir-faire to know how to most effectively access and build on the network that preceded them.

It’s critical to analyze and understand the past and present of the Black Lives Matter network as we move toward its future, because the narratives spun from a movement’s origin stories can determine its impact and outcomes even decades later. Historians for instance have shown that neoconservative arguments portraying the civil rights movement as a brief effort limited to the 1960s blunted the movement’s effectiveness and weakened its power to influence future generations by obscuring the ties between the 1960s and the multitude of freedom struggles initiated since the fall of Reconstruction.

If we are to avoid the same pitfalls, our narratives about what I call the digital phase of the long civil rights movement must not be severed from its technological history, where people of color – website designers, software engineers, digital entrepreneurs, and social critics – labored, innovated, and produced a foundation for the movement to continue well into the future.