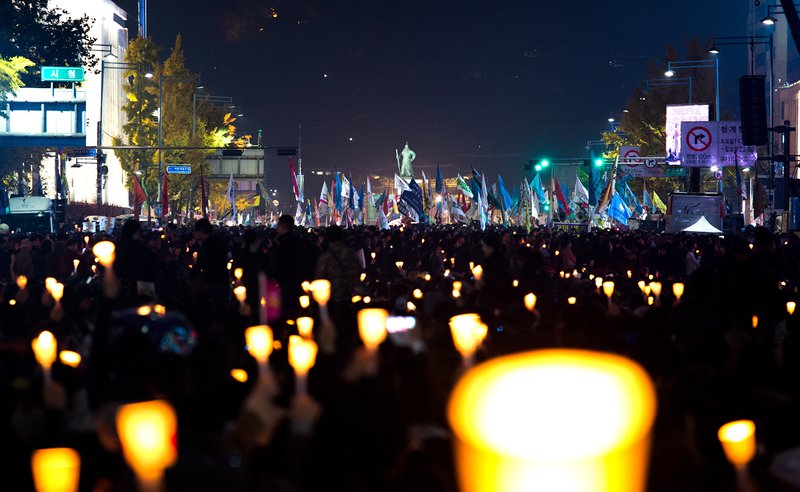 These days, it’s largely impossible to talk about democracy without also mentioning how it’s on life support. From the United States to France, democracy’s defenders are scrambling to protect liberal institutions from the illiberal forces that threaten them. Still, this doesn’t mean that all's lost. To see why, though, we ought to look beyond either side of the Atlantic—to South Korea.

Last Friday, former South Korean President Park Geun-hye was arrested, becoming the country’s first leader to be put behind bars since the 1990s. Several weeks prior, Park had been questioned in connection to the bribery and corruption scandal that led to her formal removal from office by the Constitutional Court on March 10. Growing up in the Blue House, the official residence of the president, had blurred the lines between public and private for Park, the daughter of military dictator Park Chung-hee, who had previously swapped the country’s democratic principles in exchange for stability and economic development. Park’s inability to distinguish between official state business and private matters, at least in part, led to the former president’s confidence and trust in Choi Soon-shil, a long-time friend, advisor, and shamanic leader who was indicted for bribery, abuse of power, and leaking classified documents.

Even after her official ousting, Park took two days to vacate the Blue House and 10 days to speak to prosecutors. Just days after her arrest, the Sewol Ferry was finally lifted after a disaster claimed 304 lives back in 2014, a symbol of Park’s aloof presidency. Her removal followed months of popular protest as millions of Koreans took to the streets, converging week after week at Seoul’s City Hall plaza, to demand her resignation. Korean civil society has long used protest as a way to advocate for change. This is because, with a fluid and changing political structure, Koreans are unable to influence policymakers in the same way that, say, their Americans counterparts can. Calling a senator or writing a letter, for instance, doesn’t have the same weight in Korea. Unlike in the realm of American politics, where the two-party system reigns, South Korea has a parliamentary structure with multiple parties that often splinter, merge, and change names. Park’s struggling Saenuri (New Frontier) Party, which was created in 2012 for Park’s election, just re-branded to become Liberal Korea in February. And in the 1990s, the conservative parties merged three parties to create a mega-conservative block.

In important ways, Park’s presidency, which began in 2012 when she secured a victory with a slim majority of just north of 50 percent of the vote, was a continuation of Koreans’ long-held trust in a human rights-economic development trade-off. Initially, citizens wanted a leader who could guide them through the lingering global financial crisis of 2008, and they thought that Park, like her authoritarian father before her, could do that. But over the course of her presidency, there was a change of political heart among the citizenry, who for the past several years now have sought an out from Korea’s decades-long rule by military dictatorship.

As a result, the recent candlelight protests mark a historic moment for Koreans, who not only succeeded in influencing National Assembly members to vote for impeachment on Dec. 16, but who also saw the Constitutional Court unanimously uphold their decision on March 10. For one of the first times in Korea’s relatively young and wobbly democracy, protests had been wielded as a peaceful tool to shift public policy. As conservative and far-right populist movements gain traction throughout the United States and parts of Western Europe, many have questioned whether liberal democracy is dead. In South Korea, however, after 10 years of corrupt conservative rule, Moon Jae-in, the leader of the liberal Democratic Party, won the party's nomination on Monday and is favored to win the upcoming election.

That said, with only 33 days to go until the snap election on May 9, tensions are running high in Korea and throughout the region. North Korea fired a ballistic missile earlier this week in response to US President Donald Trump’s meeting with Chinese President Xi Jinping. A recent visit by US Secretary of State Rex Tillerson aggravated relations with North Korea when Tillerson stated that US strategic patience with the pariah state had ended. (Last year, Park’s conservative party also closed the Kaesong Industrial Complex, which for years had been a key diplomatic initiative between the two Koreas.) And prior to leaving office, Park had approved the deployment of THAAD, an advanced anti-ballistic missile system. China views THAAD as a threat to its military operations, which has fueled economic attacks on Korean businesses within China.

The investigation into Park’s involvement in bribery, extortion, and abuse of office will continue as Koreans prepare to head to the polls, while she and Samsung’s heir Lee Jae-yong wait behind bars. If indicted, Park will face trial on a corruption scandal that includes $38 million in bribes. Corruption has long been woven into the crony capitalist system of South Korea, so whoever is elected next will hardly have it easy. This person will have to convince the Korean people that they will limit abuse of power within the government and put the country on track for growth, as Park has left her successor with a sluggish economy, soured relations with neighbors, and an impatient population that’s hungry for change.

Yet while it’s impossible to predict how a political landscape as robust as Korea’s will play out in the future, the dramatic end to Park’s fraught four-year presidency reflects a hopeful shift away from the cold war politics enlisted by her father to spur economic development at the expense of human rights. And there’s a renewed hope in Korea that citizens will continue to be engaged and informed following the recent candlelight protests. Conservatives noted, smugly, that candles flicker in the wind, hinting at the tenuous power of protest. In response, Koreans started utilizing LED lights. This resilience and stamina reflects a new unity among the majority of Koreans, and the upcoming election will likely reflect the frustrations of the people. But regardless of whom Koreans choose as their next leader, this current political moment already marks a pivotal chapter in the country’s modern history. Indeed, it’s proof that liberal democracy isn’t necessarily dead—to the contrary, in Korea, we’ve just seen its thumping triumph.