Secession and the Prospect of Progress 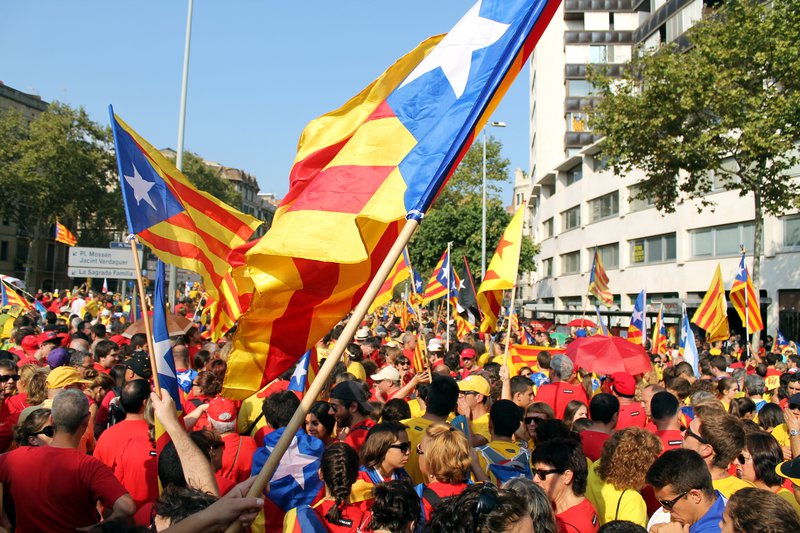 Calls to further autonomy and self-determination are on the rise in Europe. Britain, after all, is in the throes of a heated debate as to whether it should stay in the European Union at all.

But the issue is not only that Britain wants to leave Europe, or that some in Scotland still want to leave the United Kingdom. The late-September elections and subsequent calls for a referendum in Catalonia—the wealthy region in northern Spain—are proof of the success of secessionist movements. At the polls, 48 percent of the electorate supported one of the two parties calling for independence, while another 11 percent voted for a party that is ambivalent on independence but clear in its support for a referendum on the issue. Now Spain has little option but to hold an official and binding referendum on the matter itself, or to propose a referendum on a constitutional reform serving the same purpose.

Why are these movements emerging? And why now?

It is not a coincidence that calls for secession—be they from the EU or from the main of Spain—are happening as Europe comes to a political crossroads, poised to decide between becoming a federalist project (a union of citizens) or remaining a union of member states. At the same time, the recent economic downturn has convinced citizens that national governments have been run inefficiently, and to those citizens it is all too tempting to cast aside whatever loyalty they are expected to have and make their exit to a new adventure.

In the Catalan case, those citizens are not without their reasons: Spain is the prototypical example both of macroeconomic mismanagement (with debt ratio now being at 100 percent of its GDP and a long history of waste in public investment) and of inability to manage social complexity (most observers would agree that it should have never drifted away from a federal model of governance).

But surely, some might be thinking, a few discontents do not make a movement. How have secessionist movements been built and maintained with such success?

As a natural supporter of federalism as a model of governance and a Catalan-born British academic observer, I will do my best to provide my view, which is this: There is a difference between the British movement to leave the European Union and the Catalan movement to leave Spain. Unlike Britain, where an exit from the European Union is mainly supported by conservatives who oppose European federalism, the Catalan secessionist movement is about deepening the ideals espoused by Europe, and is being carried out mainly by those who pursue progress, but have lost their faith in their ability to do so as part of Spain.

The Narrative of Disenfranchisement

Catalans did not wake up one morning and find themselves disenfranchised. Rather, their discontent is the natural consequence of a progressive disconnect. Many, especially those more educated Catalans, perceive their views as not being well represented by the central state. Many feel neglected and even, at times, unfairly misled by the short-term nature of Spanish commitment to federalization after the transition to democracy. This is happening in contrast and in parallel to the federalization of Europe.

This is to say that Catalans look to their inclusion in the European project as an answer. If Europe is truly the democracy that it set out to be, then, surely, it has to accept a new state, one born out of a democratic process (here, a referendum), regardless of how much the Spanish constitution emphasizes “territorial integrity” (quite a bit).

Catalonia stands out as country that could rank between Denmark and Finland in GDP. Catalans make up 15 percent of the Spanish population, but produce 28 percent of Spanish trade. They are 1.5 percent of the European population, but attract 3.5 percent of European Research funds in competitive grants. Barcelona is a leading European tourist destination, and its universities top the Times Higher Education Rankings for Spain. Few people seriously doubt its economic viability.

Certainly, the cost of transitioning into statehood is not negligible. But in the minds of those who support secession, focusing on cost is almost beside the point. What makes this movement possible is the prospect—and almost promise—that it will bring not only economic but also social progress.

The project of secession has disproportionately attracted two groups: those in the younger generations and progressives. In both Scotland and Catalonia, former socialists have started supporting parties advocating for independence in such a way that the narratives of political and social liberalization have often become intertwined. The progressive social reforms that have attained majority support in Catalonia (such as ending animal torture during bull fighting, reducing the financial privileges of the Catholic Church, etc.), have not managed to achieve such support in Spain. Secession is conceived not only as a project of “elite substitution,” but also as an opportunity to build a new polity from scratch, without the same old burdens and concessions.

Secession and the Welfare State

The fight to leave Spain to move closer to the institutions and social values of Europe, then, is actually tied to one waging within and throughout Europe: that between the welfare state and austerity. In this context, it is hardly surprising that arguments in favor of secession in Europe are tied to the defense of the continent’s welfare states. The viability of secessionist movements is inextricably linked to the perceived viability of the welfare states they would create. Those movements have to contain a promise different enough that people can overcome their own political inertia. Some evidence of good governance and social reform must be given by those leading the charge.

The period of devolution has provided that evidence. Indeed, like the Scottish government in the U.K., Catalonia has mostly managed its social policy responsibilities (e.g., health, social care and education), and has successfully established the Catalan health system as the frontrunner in Spain. Its developments—the Catalan Health Technology Agency, undertaking a purchase provider split in health service provision, and the integration of health and social care—have been copied across Spain. Successful demonstration of devolved social policy has, without a doubt, helped the cause of Catalan secession.

This is in contrast with the Spanish central state, which Catalans feel has neglected not only the improvement of social policy, but also commitment to diversity. Only one year after health care was devolved to Catalonia, the central state attempted to re-centralize health care responsibilities with a “health care coordination bill.” While the Spanish government removed the health insurance converge of illegal migrants, the Catalan government maintained it throughout the economic downturn. Further, the Spanish government has continually interfered in the language of the Catalan education system, which uses Catalan as a means to enhance social cohesion and reduce inequality. Finally, while the Catalan government made serious attempts to deal with fuel poverty in the midst of the economic downturn, Spain deemed Catalan reforms on the matter unconstitutional, as they challenge a status quo of well-entrenched, central-level, rent-seeking interest groups who benefit from a centralized energy policy.

Three lessons can be extracted from the Catalan call for secession.

First, in today’s Europe, people feel loyalty not to their state, but to the governing body that they feel holds itself accountable and fulfills the needs of the national community.

Second, for heterogeneous states to stay together, commitment to autonomy must be for real, and not just a short-term strategy to be reversed with the use of a centralist reinterpretation of the Constitution, as the Spanish experience shows. Certainly, had the Spanish state respected the autonomy and diversity of the Catalan, the secessionists may well have been sated.

Finally, for a project of secession to have any chance of success, and to attain the support secessionist movements have today in Catalonia and Scotland, it has to rely on a wider project of social reform. Secession must offer a prospect of social and economic progress. Nobody is going to listen to a call to leave to join more of the same.