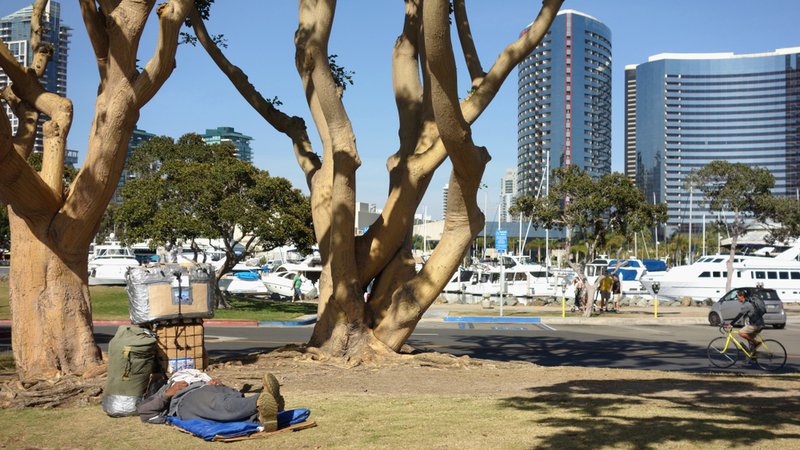 Now a new state law is forcing hospitals and regional leaders to publicly grapple with where those patients can recover once they are released from the hospital.

Senate Bill 1152, signed into law by then-Gov. Jerry Brown last fall, requires hospitals statewide to establish plans for discharging homeless patients and to get a handle on resources that might keep them from returning to the street.

But there are only a few dozen of those beds in a county with the nation’s fourth-largest homeless population – and the San Diego Rescue Mission, which had for years operated the largest facility in central San Diego, halted its program just as the new state law took effect.

Now hospitals, homeless-serving nonprofits, health plans, politicians and government bureaucrats are wrestling with how to respond.

For years, Californians have heard horror stories about vulnerable homeless patients being dumped back onto the street, still wearing hospital gowns.

Then-state Sen. Ed Hernandez, who represented San Gabriel Valley cities, responded last year with legislation mandating that hospitals document help and services provided to homeless patients, and set plans to ensure those patients can be offered options other than an immediate return to the street. The law also requires hospitals to provide meals and weather-appropriate clothing to homeless patients when it’s needed, and to offer them transportation to their next destination when they are discharged if it’s within 30 miles or 30 minutes of the hospital.

The law doesn’t require that homeless Californians be given temporary housing or provide new resources to deliver it.

But in San Diego, the increased scrutiny surrounding the new law has triggered regional conversations about the lack of options for a constant flow of homeless patients.

And homeless patients can remain in hospital beds for days longer than needed while case workers search for another place for them to go – or end up suffering on the street absent a suitable landing spot.

“We’ve always had a shortage. It’s not like all of the sudden, we’re seeing people we can’t place,” said Dr. Gary Vilke, an emergency medical physician and a medical director in the UC San Diego Health System. “We’ve always had challenges placing people.”

Last year, City Councilman Chris Ward and County Supervisor Nathan Fletcher, then a candidate, called a press conference to spotlight the need for more care facilities that can provide homeless San Diegans with temporary housing and connect them with other resources, including longer-term housing, while they recover.

They have noted that recuperative care programs could both help homeless patients and the hospitals trying to serve them.

At the local Hospital Association’s annual meeting last fall, a director for the Yale New Haven Health System in Connecticut reported that system’s inpatient readmission rate for homeless patients had fallen from about 50 percent in 2012 to about 17 percent in 2016 for patients who had been discharged to recuperative care.

Fletcher said he has since held many meetings with county bureaucrats, hospitals and nonprofit leaders to discuss potential solutions. He believes greater investments in recuperative care could lessen the demand on overtaxed hospital and behavioral health resources, and he’s called on hospitals and local agencies to consider how they could increase local offerings.

“We need everyone figuring out how they can do more,” said Fletcher, who is also looking into whether the county could provide a site or other resources to support additional recuperative care facilities.

A few nonprofits have already stepped up to provide these services in San Diego. Still, there’s no regional inventory of those offering these services – at least for now – which has complicated matters for community leaders exploring next steps.

About a decade ago, the San Diego Rescue Mission became the first agency in the region to open a recuperative care facility, serving about two dozen patients at a time at its Bankers Hill headquarters.

Escondido-based Interfaith Community Services later opened its now 32-bed recuperative care program to serve veterans and other homeless patients released from local hospitals while City of Refuge has served homeless men at a smaller home in the College Area.

In the process, homeless San Diegans like Richard Bolt, a 58-year-old Army veteran staying at Interfaith’s Escondido center, can recover in a safe place with daily meals and support.

Bolt, who previously spent two years living on the street and in his truck, said he moved into Interfaith’s center after a November surgery to remove tumors in his chest.

At the quiet residential facility in a former medical office, Bolt said he’s taken life skills classes and benefited from counseling and therapy. The program also ensures he has rides to crucial medical appointments.

“It’s a great first step to get your life back together,” said Bolt, who is now working to secure an apartment in Chula Vista.

But hospital executives and homeless advocates say there aren’t enough facilities like the one Bolt is staying at to fulfill the need, particularly outside North County.

So nonprofit leaders, advocates and others were shocked last month when they heard that the Rescue Mission had closed its recuperative care facility just as the new state mandates went into effect.

The Rescue Mission had for years taken in dozens of patients annually from Sharp, Scripps and UC San Diego hospitals, which serve some of the San Diego communities most affected by homelessness.

Amy Adome, Sharp Healthcare’s senior vice president of clinical effectiveness, said Sharp typically sent five to seven patients a month to the Bankers Hill nonprofit – and even that fell short of the need.

Yet Jeremy Dawsey-Richardson, the Rescue Mission’s vice president of programs, said his agency decided to close its recuperative care center because it couldn’t fill its beds.

He said a months-long period where less than a third of the agency’s recuperative care beds were occupied forced the agency to consider whether it could sustain the program.

Unlike the Interfaith program, which employs several nurses and health aides, Dawsey-Richardson said the Rescue Mission didn’t have medical workers on staff, limiting the pool of clients it could serve. The program – which for years allowed hospitals to pay for beds only on the days their patients used them – had seen more fragile patients with greater needs in recent years.

“We continued to see the need in the community but that need wasn’t being leveraged,” Dawsey-Richardson said.

He said the new state law may have changed that.

Regional groups, including local Hospital Association and the Regional Task Force on the Homeless, the countywide group that coordinates the local homelessness response, are discussing how to respond. Meanwhile, the Community Information Exchange, affiliated with service line 211 San Diego, is working with hospitals and homeless service providers to collect data to better nail down the regional need.

“There is a public will now. Everyone seems united in the problem,” said Family Health CEO Fran Butler-Cohen, who said her team plans to seek potential recuperative care sites in central San Diego. The nonprofit now operates health clinics across the county.

Greg Anglea, CEO of Interfaith Community Services, said a funding model that includes contracts with hospitals to reserve a certain number of beds for specific hospital groups and health plans could be an answer for future programs.

Anglea said Interfaith’s contracts with Palomar Health and Tri-City Medical Center have led to more stability in both funding and occupancy rates.

Dr. Chris Esguerra, senior medical director for Blue Shield of California Promise Health Plan, confirmed his plan is also finalizing a contract with Interfaith and seeking other solutions following the Rescue Mission closure. Among the options on the table, Esguerra said, is working with San Diego-based agencies to fund a new recuperative care facility.

“We want those supports for our members,” said Esguerra, who said he believes recuperative care programs not only help address health issues and costs but can improve homeless patients’ lives.

Indeed, in the past six months, Interfaith reports that 61 percent of patients who have exited its recuperative care program have moved onto more stable housing – a higher percentage than many shelters.

Navy veteran Darren Poulson, 57, is one of those success stories. He spent about five years living on Escondido streets before he had a stroke last May.

After a month-and-a-half in the hospital, Poulson said he ended up back on the street for a week until an outreach worker connected him with Interfaith.

Poulson recalled Interfaith’s support as he endured therapy sessions to learn to swallow and speak more clearly. He recently moved into an apartment in San Marcos.

Poulson was overcome with emotion last week as he reflected on his experience and the help the program provides homeless San Diegans.

“You want someone to catch you when you’ve fallen, and they do that,” Poulson said. “I thank God for them.”