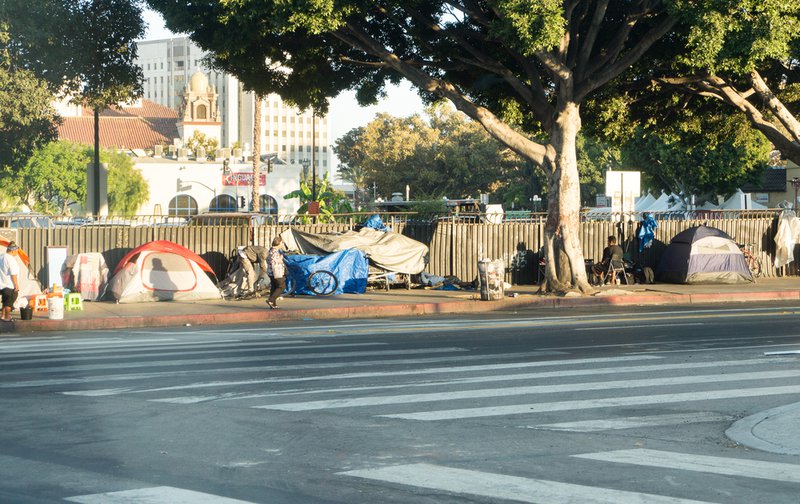 In three months, one of the city’s three shelter tents must come down and the roughly 150 homeless San Diegans staying there will need to move elsewhere.

The city still needs to figure out where those homeless San Diegans will go or risk leaving dozens out in the cold come early March.

Father Joe’s Villages agreed to operate a tent for families and single women on its plot at 14th and Commercial streets in East Village last year amid a rush to open shelters during a deadly hepatitis A outbreak. Father Joe’s has been open about the site’s short shelf-life. Early on, the nonprofit said it planned to build a supportive housing facility there, meaning the shelter would need to close by early 2019.

They worry about what will happen to vulnerable women and families once the shelter closes — and in the months leading up to that closure.

In the meantime, some influential philanthropists-turned-homeless-advocates are agitating for the city to consider housing people in Golden Hall, at the Civic Center, in the absence of a better solution.

Mayor Kevin Faulconer, leaders at the San Diego Housing Commission and Father Joe’s are adamant that dozens of now-sheltered homeless San Diegans won’t be without shelter.

“The mayor has directed staff to ensure that no clients will be forced back to the streets because of the closure of the shelter,” Faulconer spokesman Greg Block said.

Yet no decisions have been announced, leaving some advocates to fear the worst.

The shuttering of the Father Joe’s tent is the latest crossroads for the city following Faulconer’s sprint to open the shelters last year. City Council members have scrutinized the tents’ failures to quickly move clients into housing. The implosion of a November ballot measure that could have delivered more money for homeless programs solidified the tents’ uncertain future.

And Veterans Village of San Diego CEO Kim Mitchell, whose organization operates another 200-person tent in Midway, said the Navy has reminded her that VVSD’s shelter site isn’t guaranteed over the long haul, either. VVSD’s tent now sits on federal property that the Navy has considered opening up for redevelopment, a process unlikely to play out quickly.

For now, the city and VVSD have the go-ahead to operate through next June and the focus is on next steps for the Father Joe’s shelter.

Block, Father Joe’s CEO Deacon Jim Vargas and Lisa Jones, the San Diego Housing Commission’s senior vice president of homeless housing innovations, say all involved are discussing short-term solutions for the shelter’s inhabitants and a new home for the tent. Father Joe’s is also continuing to seek permanent homes for those now staying in the shelter.

The city is looking for a new location near Father Joe’s East Village campus, which offers a plethora of services, and hopes Father Joe’s can continue to operate the tent once it goes back up.

But past searches for shelter sites dragged on for months and even once a new home for the tent is found, Vargas cautioned it can’t go up overnight. It could take two months to reopen the tent elsewhere.

That reality has led philanthropists Dan Shea and Peter Seidler, who donated the city’s two other bridge shelter tents, to raise alarms. They worry about what will happen to vulnerable women and families once the shelter closes — and in the months leading up to that closure.

Among the options they have floated for homeless families and women: Golden Hall, a City Hall site now used for events.

“I think the backup plan can be easily identified now, ‘in case’ all else fails and we have suggested Golden Hall as that backup plan,” Shea wrote in an email to VOSD. “This is another underutilized city property that could be used to keep 150 people, single women and children, from going back on to the streets while alternatives continue to be explored.”

Shea said that pitch hasn’t been embraced by city officials, who have repeatedly said Golden Hall isn’t an ideal shelter.

“None of what we have heard is credible in our view,” Shea said.

The mayor’s office didn’t weigh in on Golden Hall’s possibilities, despite questions from VOSD.

Vargas said he expects other homeless providers will take in clients after the shelter closes.

In the meantime, Vargas said Father Joe’s staffers are trying to move all staying in the tent into housing before it closes.

The Housing Commission’s most recent report on shelter outcomes shows the agency in September moved 47 percent of clients who left the shelter into permanent homes — up from about a third of clients in the program’s initial six months.

Shea, Seidler and other homeless advocates were concerned Father Joe’s shelter beds could sit empty before the closure as existing clients moved out.

That’s because shelters typically stop taking in new clients in the months before a pending closure to ensure all can be connected with other housing before they close.

The Housing Commission, city and Father Joe’s “want to utilize every bed that can be used to help those on the streets,” Jones wrote in an email. “This is especially true as we are entering the winter months.”

“I want to make sure that we are utilizing those beds as best we can and continue to work with people to help them off the streets,” Vargas said.

But Shea, Seidler and other advocates will be watching closely to ensure homeless San Diegans don’t get lost in a likely chaotic transition.

For that reason, Shea said, the Lucky Duck Foundation, the nonprofit that has facilitated the tent donations, is considering donating a third tent to the city but won’t do so unless it’s certain it will result in more available beds.

“Lucky Duck Foundation has said we would consider paying for another tent if, and only if, the city would find a location for it, and if, Father Joe’s Villages tent is guaranteed to go back up in another location thus providing a net +1 (tent), and not putting that tent into storage, which would make no sense whatsoever,” Shea wrote.