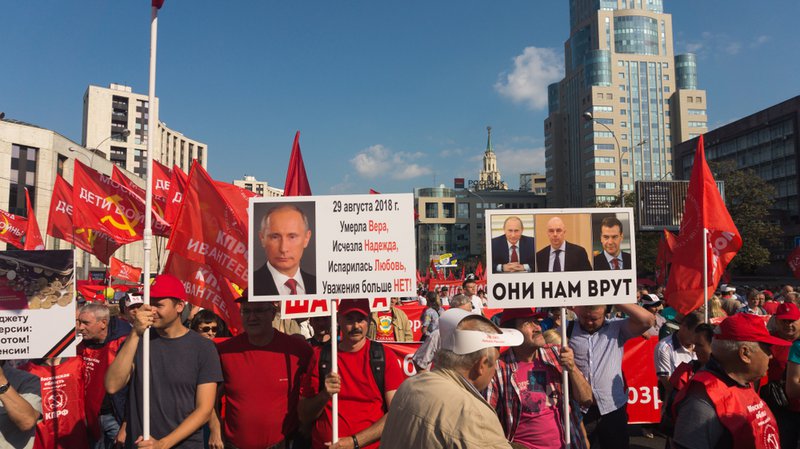 Whenever you read about Russia in Western media these days, you can expect to find stories centered on meddling and murder. Take, for instance, the recent exposure of the Russian military intelligence officers involved in poisoning former Russian double agent Sergei Skripal and his daughter Yulia. That salacious story, coupled with growing fears of Russian hacking in the U.S. midterm elections in November, conjures an image of the country’s elites as omnipotent and immutable—an image so potent that it’s easy to envision Russian President Vladimir Putin as an all-powerful autocrat with a firm grip on power, puppeteering from inside the Kremlin.

But what if Russia isn’t as stable as it seems? Specifically, there may be profound shifts in the country’s domestic politics that observers ought to pay closer attention to: What started with a government attempt to ram through unpopular pension reforms has now morphed into high-level administrative restructuring. It’s tempting to view these developments as minor squabbling in an otherwise consolidated system. But this confluence of international embarrassment, protracted conflict, and growing domestic pressure could significantly alter the system. And if domestic order is upended, there’s no telling where Russian foreign policy may go in the years ahead.

The proposed changes to the pension system were announced on June 14 by Prime Minister Dmitry Medvedev. The first draft of the reform bill proposed to gradually increase the retirement age for men from 60 to 65 and from 55 to 63 for women. The announcement sparked a massive uproar, with a Change.org petition against the pension reforms gathering a million signatures in only three days. The government’s approval rating plummeted 14 percentage points between April and August 2018, while Putin’s approval rating declined by 12 percentage points over that same period. In a national address in August, Putin conceded, softening the reforms to salvage public approval. (Women’s retirement age was lowered to 60.)

But this compromise wasn’t sufficient, and Russians took their frustrations to the polls during the September 9 regional elections. Russia has 85 regions, with elections held every year on a rotating geographical basis. The direct gubernatorial elections—reinstated in 2012 after protests led Putin to revise the law, which had previously allowed him to propose candidates for consideration to the local legislatures without citizen input—are by far the most crucial.

The first signs of trouble manifested in the Far East Primorye region, where electoral authorities annulled the results of a disputed runoff vote in response to allegations of ballot-stuffing in favor of incumbent governor Andrei Tarasenko, who was backed by United Russia (UR), the ruling party. Two more governors—Svetlana Orlova from the Vladimir region and Vyacheslav Shport from the Khabarovsk region—were defeated by candidates from the pseudo-oppositionist LDPR party. “Pseudo” because neither LDPR candidate actually tried to win: Vladimir Sipyagin in Vladimir failed to run any semblance of an election campaign, and Khabarovsk’s Sergey Furgal accepted the post of deputy governor from Shport the week before the election. Meanwhile, the run-off election in the Khakassia region has been postponed after the governor unexpectedly dropped out in anticipation of a loss, citing ill-health. On top of that, two other governors—in the Lipetsk and Kurgan regions—resigned as their terms were set to expire in 2019, while the St. Petersburg governor was asked to resign in exchange for a federal post.

In light of this shakeup, it’d be rash not to ask ourselves: Is Russia the unchanging block of raw power the West thinks it is? And if not, what might this mean for its foreign policy?

Indeed, the country hasn’t seen such high turnover since the 1990s, when former President Boris Yeltsin appointed governors after the collapse of the USSR. Since September 26, 11 regions have changed governors; 39 governors in total have been replaced in the last two years. Put another way, what began as a protest vote by an unhappy public, one that was fully aware that the LDPR didn’t represent a legitimate challenge to the Kremlin but that still chose to vote against UR candidates, might signal an important pivot in Russian politics.

For its part, Russia-based and Russian-language media abound in theories and speculations about the possible reason for the gubernatorial reshuffle. Some cite the “2024 problem”—internal discussions surrounding Putin’s bid to remain in power after his term expires in 2024, and how he might best achieve it—as the driver behind the replacements. Others see the move as a planned renewal effort aimed at replacing old-guard (and simply old) governors with a younger, more technocratic variety, groomed at specialized universities. Whatever the reason, the pace and scope of change is significant, and Western media should keep a close watch.

For one, domestic politics plays a key role in how Putin positions himself internationally—and vice versa. For instance, on his reelection to the presidency in 2012, after a four-year stint as prime minister, Putin was confronted with anti-government protests (followed by a crackdown), as Russians demanded an end to corruption and cronyism in politics. But then, when Russia annexed Crimea in March 2014, his approval ratings suddenly shot to an all-time high of 88 percent.

While to claim that the Kremlin intentionally masterminded the intervention to re-channel discontent is speculation, Putin was able to take advantage of an external threat—the 2014 Ukrainian revolution—to rally the public behind him, ramp up anti-Western sentiments, and stoke nationalism. In fact, according to Russian economist Sergei Guriev, “Putin has rewritten the social contract in Russia,” reframing successful governance in geopolitical, rather than in economic, terms. Diverting attention from domestic dissatisfaction, at least in that case, worked perfectly.

Fast-forward to today, when Russia faces similar domestic frustration in a vastly different context. In addition to lingering discontent over the pension reforms, the country is bogged down in international wars and burdened with renewed sanctions from the West—and the public is growing less enthused with Russia’s geopolitical posturing with each passing year. Intense patriotism and anti-Western sentiment ignited by the Crimean annexation are subsiding: Whereas 81 percent of Russians viewed the United States negatively in 2014, the number last month was 55 percent. As domestic pressures on Putin’s government have increased following the introduction of pension reforms, the question we ought to be asking is whether he may once again look beyond the country’s borders for a diversionary tactic, in an effort to reroute public frustrations.

Importantly, the Kremlin is already stretched thin by a litany of international debacles, which may dampen Putin’s enthusiasm for foreign intervention as he focuses on securing his path to staying in power after 2024. Just this month, Russia came to blows with Israel over the downing of an IL-20 aircraft—the latest result of its continuing military support for the Assad regime. And this is to say nothing of the prolonged conflict with Ukraine that has manifested in another conflict, a major rift between the patriarchates of Moscow and Constantinople over the establishment of an independent Ukrainian Orthodox Church. Plus, following the Skripal incident, the United States implemented a new round of sanctions against Russia, resulting in a slide of the ruble. In an August 2018 Russian opinion poll, 72 percent of respondents ranked price increases as the most pressing problem in their society.

Of course, therein lies the rub. Manipulating an opportune international crisis may have worked once, by convincing the public that Russia’s global status was more important than its economic performance. But there’s no guarantee that this tack will work again, since Russia is currently reeling from the fallout of its power trip: military commitments it can’t escape putting pressure on an ailing economy and increased international isolation fueled by its cyber exploits. Russians may be willing to endure hardship for a worthy cause, but they’re losing faith in that cause.

All of which means that the Kremlin now needs to find a new one.

In planning international policy, it’s important that the United States understands how (not whether) Putin plans to hold onto power in 2024. Two legitimate governorship losses show deep discontent that Putin must contend with. The world would be wise to watch how he acts to consolidate and legitimate his power, since a change in governmental structure could fuel significant foreign policy shifts. What goes on behind the Kremlin’s doors is anyone’s guess, but the recent gubernatorial reshuffle is surely an outward sign of internal policy changes—one that shouldn’t be overlooked at a time when a Hollywood-esque spy drama is siphoning off the world’s attention.