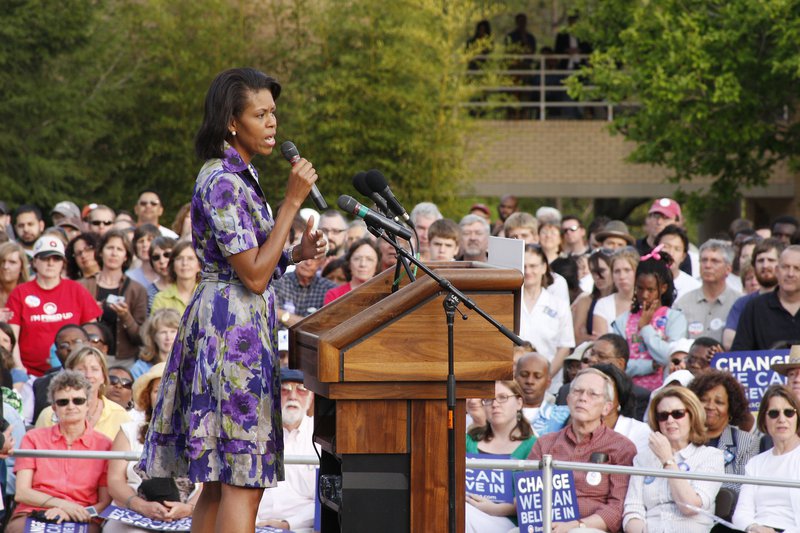 “Being first lady is the hardest unpaid job in the world,” goes a saying commonly attributed to Pat Nixon. While there may be many an unpaid worker who would dispute that, it is true that today’s first ladies are diplomats, advocates, policymakers, fashionistas, and Moms-in-Chief. They’re Ivy League graduates who put their careers on hold only to be expected to work for free. Their role is both aspirational and retro, reflecting the contradictory expectations of women in modern America.

Those constraints and contradictions have a long history, one that Louisa Thomas set out to discuss in a conversation on her book "Louisa: The Extraordinary Life of Mrs. Adams," a biography of John Quincy Adams’s first lady, at a recent event at New America. Along with Kate Andersen Brower, author of "First Women: The Grace and Power of America's Modern First Ladies," the Washington Post’s Krissah Thompson, and New America’s Mark Schmitt, Thomas told Louisa’s story and discussed how the first ladyship has, and hasn’t, changed since 1825.

Then, as now, the first lady’s behind-the-scenes efforts helped propel John Quincy Adams’s political career. At a time when “electioneering... was considered craven” and “politicians did not run for office”—not explicitly, at least—Louisa began hosting parties to consolidate support for her husband, Thomas said. Though she called these efforts “my campaign,” Louisa insisted that she was not a politician.

After John Quincy entered the White House, however, Louisa was forced to retreat from public life. First ladies of the era stayed out of the spotlight, aside from hosting the occasional soiree. Louisa struggled with her seclusion. In contrast with the excitement of “her” campaign, the presidency was the low point of Louisa’s life.

Though the first lady’s work today is more visible and varied than Louisa Adams’s—Michelle Obama doesn’t spend her days locked away translating French poetry, as Louisa did—the role of the first lady “continues to be a 19th-century institution,” Thomas said. The “prison metaphor” of the White House endures, Thompson said—President Obama’s remarks at this year’s White House Correspondents’ Dinner featured a joke that Michelle had jumped the fence. First ladies may have policy goals, Thompson added, but they are expected to remain in their traditional domain of women’s and children’s issues and to complement their husbands’ agendas. Asked how any first couple can have a truly equal marriage, Michelle Obama has said, “I’m married to the president of the United States. I don’t have another job, and it would be problematic in this role. So that—you can’t even measure that.”

Nevertheless, many first ladies, from Louisa Adams to Eleanor Roosevelt to Michelle Obama, have intellect that rivals their husbands’; increasingly, they have the education and achievements to match. Hillary Clinton, of course, stands out among modern first ladies, but she’s unique mostly in her choice to make full use of her credentials—she is by no means the only first lady with an impressive resume. We expect first ladies to be smart and accomplished and articulate, even though it’s not them we’re voting for. And we find them endlessly intriguing—on political dramas like House of Cards and Scandal, first ladies are depicted with equal parts fascination and suspicion.

The role, then, is a complex balancing act. Most American mothers could probably relate. Michelle Obama has called herself America’s “Mom-in-Chief,” espousing a sentiment that stretches at least as far back as Jackie Kennedy, Brower said. Some argue that the title downplays her accomplishments for the sake of political palatability. This may be true, but she’s not alone: many moms today have careers and lives outside of their families, yet they can’t shake the perception that motherhood is what defines them. That’s not to say that motherhood can’t be a woman’s most important job, if she views it as such; however, first ladies, like many an American wife and mother, must walk a fine line between professional success and traditional domesticity.

Indeed, the first lady’s responsibilities may be different day-to-day than most women’s unpaid work, but they’re not categorically distinct. In developing a salary estimate for the First Lady—that is, what someone with her job description would make if she were anyone besides the wife of the president—MONEY magazine factored in a long list of occupations that could describe many ordinary moms (and dads), too: facilities manager, interior decorator, secretary, counselor, daycare teacher.

But if there are similarities between the struggles of Louisa Adams and Michelle Obama and those of many other American mothers, perhaps it’s because the American presidency is based on a traditional and idealized model of the family: a breadwinning husband and a wife working long, unpaid hours to support him. Most U.S. family policy is based on this model, too, as evidenced by our lack of paid family leave or affordable, high-quality childcare. The difference between the first family and the rest of us is that most families don’t have a first lady, not to mention a phalanx of support staff. Twenty-seven percent of children live in a single-parent family. In nearly half of two-parent families, both parents work full time; when part-time work is included, that figure rises to 63 percent. As Thompson pointed out, family time is sacred in the White House—but only the first family’s. Though the president can carve out time for his family, White House staffers are out of luck. Apparently, you have to be the leader of the free world to get American family policy to work for you.

Though the first lady’s duties have changed since Louisa Adams’s day, one thing has remained constant: we project our ideals of American womanhood, motherhood, and family onto the figure of the first lady. Whereas Louisa Adams was forced to stay out of politics and the public eye, modern first ladies are expected to carefully balance domestic duties and family-friendly policy initiatives. They serve as role models of female strength and power, all the while standing behind their husbands and cheerfully doing the unpaid work of the presidency. And millions of American women are expected to follow their example.

Will it take a female president for us to start paying the first spouse?  That'd be a cruel irony, as it would likely mean that a man would be the first to receive that paycheck. As in many other female-dominated occupations, it seems likely that the first lady isn’t just stuck with undervalued work; the work she does is undervalued because it’s being done by a woman. Perhaps a more likely next step would be for the president’s spouse to have an outside job of her—or his—own, a point that has been raised by former first lady Laura Bush. If the first ladyship reflects American ideals, perhaps a dual-income White House would bring it closer to reflecting contemporary American reality.

Today’s first ladies have come a long way since Louisa Adams’s era. But Mrs. Adams, an admirer of Mary Wollstonecraft’s "A Vindication of the Rights of Woman," would likely agree that until all Americans, including the First Lady, are able to do the work they want to do—and are properly valued for it—we have a long way to go. Contrary to Pat Nixon’s belief, the hardest unpaid work may be getting there.