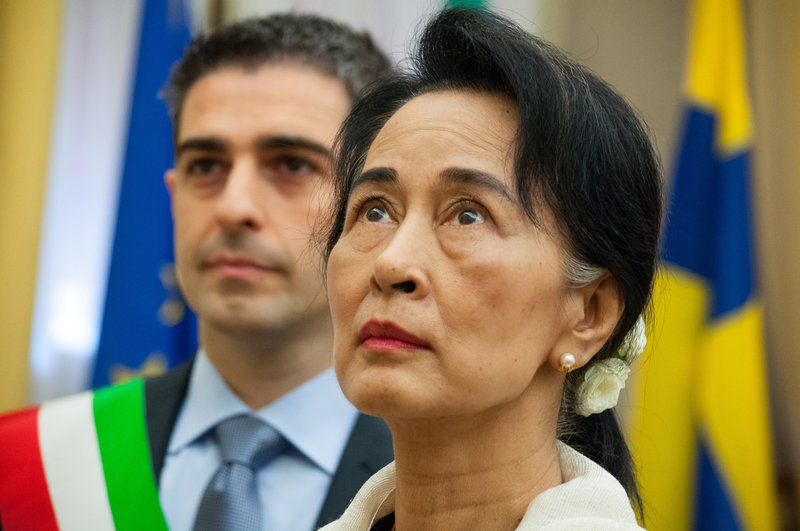 It was an auspicious beginning. After a landslide win in Myanmar’s elections in November of 2015, the National League for Democracy (NLD)—helmed by Nobel peace laureate Aung San Suu Kyi—took power in April of 2016. This victory came with a promise: Bring peace and stability to a country that had, for decades, been ruled by a brutal military junta. But now, one year later, much of that initial fanfare has ebbed. Ethnic conflicts still divide the country, reports of a new insurgency of Rohingya Muslims have opened another chapter of violence, and depending on whom you ask, the former hermit state’s economy seems to have hit a snag.

To get a one-year snapshot of the burgeoning democracy, I spoke to Ben Dunant, a journalist there. Dunant previously wrote for the Irrawaddy, a once-exiled dissident media outlet (where I worked before joining New America), and he was a political observer in Myanmar and Nepal for the Carter Center. A lightly edited transcript of our conversation is below.

Aung San Suu Kyi’s NLD swept to power with supremely high expectations for change. One year later, has the young government lived up to any of these hopes?

The government you have now is only partially in charge. What you see is a form of power-sharing, or what some are calling a diarchy: The military still controls key ministries—the Ministry of Home Affairs, the Ministry of Defense, and the Ministry of Border Affairs—and it controls a quarter of parliamentary seats [more than 75 percent of the legislature is needed to amend the military-drafted constitution, effectively giving the commander in chief veto power]; the military also has complete sovereignty over its own affairs.

So given all of that, there was a lot of trepidation over how the NLD would work on even a basic level with the military to govern. Previously, before 2016, the Union Solidarity and Development Party [USDP] was in power, a party stuffed full of former military officers, and while it didn’t always see eye-to-eye with the military, there was still trust between the two. The NLD, in contrast, went into an atmosphere of severe distrust. However, confrontations between the NLD and the military have been very few. There aren’t really any concerns about the stability of the country—no one is talking about a possible coup or a reversal of the gains seen so far. Rather, what we’re seeing now is a stable arrangement that looks like it could last. So that’s probably the biggest achievement.

And on the flip side, the NLD faces a litany of obstacles—at home as well as abroad. What are some of the most significant ones?

There’s been a lot of coverage of the NLD’s first year in power, and a lot of it has been fairly cutting, focusing on several crises. A crucial one is the situation in Rakhine State, where the Muslim minority Rohingya remain heavily segregated, after having already been victims of what were essentially race riots in 2012. Many of them are without citizenship, without basic rights, and without access to education and health care. The last government tried to solve this conflict, or rather freeze it, by placing many of the Rohingya in camps and effectively separating the communities. The NLD, under Aung San Suu Kyi, made some positive steps. It appointed a new commission, led by Kofi Annan, a move that surprised many.

But all of that was upturned last year. On Oct. 9, a suspected Rohingya militant group raided border guard outposts, killing 9 police officers and looting a cache of weaponry. The military then swept in, sealing off parts of Rakhine State bordering Bangladesh and embarking on a months-long hunt for the perpetrators. Tens of thousands of Rohingya flooded into Bangladesh. There were stories of mass rapes and reprisal killings by the military; human rights groups and international media began to gather a mounting body of evidence that the military may be committing crimes against humanity. A UN human rights report vindicated that. But against that, the state media, which is still extensive in Myanmar, launched a crude propaganda campaign to denounce the statements of international human rights groups and international media about the situation in Rakhine State—and to dismiss that this sort of thing could even take place.

This became increasingly alarming because it looked like the state media, which, in principle, is controlled by Aung San Suu Kyi’s NLD, was providing crucial cover to the military to do what appeared to be a very brutal counter-insurgency operation in northern Rakhine State. Now, you can no longer say that the NLD isn’t complicit in what may or may not be going on there. The NLD can’t control what the military does, and Aung San Suu Kyi can’t control what the military does, but they can use their popular influence to discredit the voices of international rights groups and foreign media in the eyes of Myanmar citizens.

Myanmar is also grappling with a flimsy economy. What can you tell us about that?

There’s a lot of talk in the international press of an economic slowdown, and a lot of this has been linked to the fact that the NLD hasn’t articulated very clear economic policies. However, among most local people you talk to, there isn’t a sense of things taking a downward turn. Employment is still growing, living standards are still increasing, there’s still a fair amount of optimism, and people have more personal freedoms. So most people, though they had very high expectations for the NLD that haven’t been met, still have a sense that life here is improving. And the growth that Myanmar does have is the envy of the region, especially compared to neighboring countries like Thailand, where there’s very minimal growth and lots of storm clouds on the horizon.

This is a slightly disappointing aspect of international coverage on the economy here. It’s focused on elite concerns, on the interests of big foreign investors and local crony businessmen, those businessmen who thrived under the military junta and still dominate large sectors of the economy. A lot of this criticism has reflected their concerns and their frustrations at not getting their own projects through, like not getting their big high-rises approved. In other words, the apparent slowdown is mostly felt among those with money, whether local or foreign.

For decades, Myanmar has been beleaguered by ethnic conflicts and failed cease-fires, issues the NLD has promised to face down. How’s it trying to revive the peace process?

The peace process was started by the former USDP government—under former President Thein Sein—in 2011. It sought to engage as many as 20 ethnic armed groups around the border of Myanmar that have been waging insurgencies often for more than 50 years. The resulting peace negotiations were ambitious, at least in part because they involved so many groups and dealt with such a large legacy of conflict. They eventually narrowed down in the last days of the previous government, resulting in what was called the Nationwide Ceasefire Agreement [NCA], which basically laid out a roadmap for peace negotiations: Groups would sign the ceasefire agreement, fighting would stop, everyone would sit down for a political dialogue that would result in changes to the constitution, and armed groups would disarm.

There was much speculation over how the NLD and Aung San Suu Kyi would bring the peace process forward: Would they continue this very incomplete and rather imperfect process, given that only a minority of ethnic armed groups—numbering eight—signed the NCA, or would they start afresh? There were some initial signs that they would do the latter. Aung San Suu Kyi talked about a “21st-century Panglong” summit—referencing the 1947 Panglong agreement signed between her father, the independence hero Aung San, and certain ethnic minority leaders, to form a federal union after long-sought independence from Britain. But it quickly became apparent that it was just a rebranding exercise. Aung San Suu Kyi was more or less continuing the peace process outlined by the previous government, using different names. This was probably the only thing that could be done to keep the military onboard. And so far, it hasn’t gone well, because it’s led to a real split among different armed groups, among those who signed [the NCA] and those who didn’t. So you have conflict between groups on either side of this divide.

Apparently, five groups, including an ethnic Mon army and an ethnic Karenni army, say that they will now join the NCA. The government touted this on its one-year anniversary as an achievement. If this does come to pass—and I’ve heard conflicting things, but it seems likely these groups actually will sign the NCA—then that would represent real progress. Of course, a critical mass in terms of ethnic armed groups choosing to sign on and stick to the terms of the NCA would still require the most heavily armed groups—the Kachin Independence Army and the United Wa State Army—to join, since the majority of the groups to sign so far are militarily insignificant.

The Panglong conference that was held in August wasn’t terribly ambitious—it just involved delegates reading out papers for their vision of a federal country—but it did represent the first time that many ethnic armed group representatives were all speaking together publicly in a way that was broadcast to the nation. Follow-up conferences are supposed to happen every six months. The next one has been substantially delayed, but if these new groups sign on, it’s feasible that it will be held sooner, rather than later.