It's All in the Blood 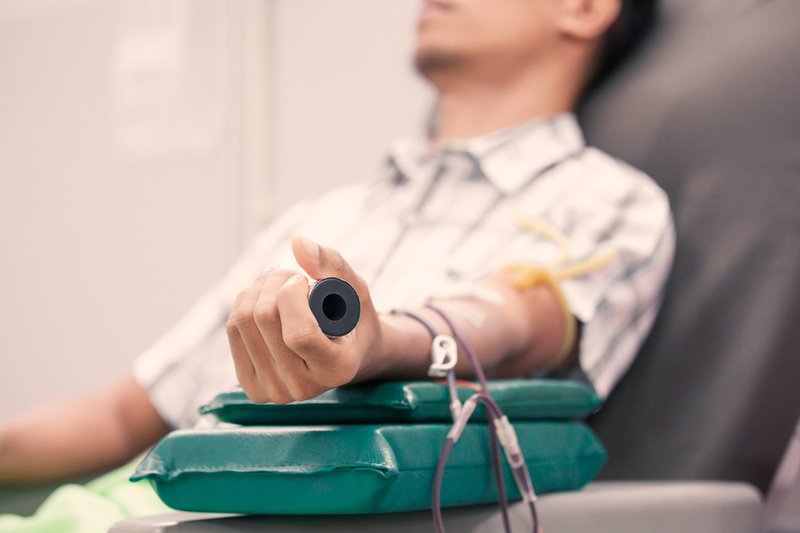 Last Thursday, on the eve of World AIDS Day, Johnson & Johnson announced something big: Together with the Bill and Melinda Gates Foundation and the National Institutes of Health, the company had launched a large-scale study that could see the eradication of HIV in as few as five years, if the drug is brought to market. What’s more, the vaccine has so far been among the most promising at preventing various strains of HIV in the original trial population of 350 volunteers. It’s impossible to overstate the importance of this development. In our lifetime, we could see a world sans HIV—a virus that, since its outbreak in the early 1980s, has wrought devastation.

For all that, though, the announcement also has been attended by feelings of frustration, and for good reason: The contagions of homophobia, even today, continue to plague medical policy.

Riddle me this: Two people have been in a committed, monogamous relationship for years. They also have never tested positive for a sexually transmitted infection. But why, then, aren’t they allowed to donate blood? Well, if these two people happen to be men, and if they haven’t forgone sex for the past 12 months, those two factors, according to the Food and Drug Administration (FDA), are reason enough to slap them with a yearlong prohibition on donating blood.

To understand the present-day anger over blood donation restrictions—or “deferrals,” in medical parlance—let’s rewind a few decades to dig up the roots of what many see as little more than a policy of discrimination. The FDA introduced the ban on donations from men who have sex with men (MSM) in 1983, as the AIDS crisis had begun to rip through the country. At the time, little was understood about HIV/AIDS, transmission, or prevention, meaning that a positive test result was often a death sentence. The crisis was, and still is, most acutely felt among MSM, and this association has indelibly linked policies around blood donation to this community.

Times, however, do change. In December 2015, the FDA, under then-President Barack Obama, reversed the lifetime ban, saying, “Though not making a change would maintain the current level of safety of the blood supply … there is evidence that the [lifetime] deferral policy is becoming less effective over time.” The ban was then replaced with a 12-month moratorium on MSM, bringing the United States in line with the policies of other developed countries.

To many, this policy change represented a historic step toward LGBTQ equality—an arguably tectonic move to help those who might need a blood transfusion in an emergency. Indeed, the Williams Institute at the University of California, Los Angeles, found in 2014 that lifting the yearlong celibacy rule would allow some 360,600 men to donate 615,300 additional pints of blood annually; this, in turn, could potentially save over 1.8 million lives every year.

Yet the limits of this apparent political about-face soon became crystal clear. In June 2016, a mass shooting at Pulse nightclub in Orlando, Fla., left 50 people dead and dozens of others wounded. There was a need for blood donations. Yet because of the FDA’s rules, most MSM, even those in committed, long-term relationships, were turned away from donating blood.

While the FDA contends that its policy is based on behavior and has nothing to do with sexual orientation, this justification, it seems, ignores science: Due to significant advances in medical technology and our collective understanding of the virus, most cases of HIV can be detected in as few as nine days after contraction and, at most, in just over one month. Though the policy change is a step in the right direction, the current waiting period is as arbitrary as a lifetime ban.

Over at Slate, Mark Joseph Stern crystallized the absurdity of the FDA’s rules by taking a look at its other policies, and how they really don’t appear to follow reason: “Straight people who enjoy frequent unprotected sex with a rotating cast of anonymous partners? No waiting period at all.”

None of this is to diminish the hope offered up by the possibility of extinguishing HIV. Neither is it to smother the increasing visibility of a community that, for decades, has been stigmatized into silence. Rather, it’s to get at the ways queer people continue to go unseen—on, before, and after World AIDS Day. It’s also to get at a much deeper question: Is it even possible to make inclusive a policy stemming largely from the exclusionary hysteria—and political pieties—of decades past?

I have my doubts. World AIDS Day, and all the days before and after the next one, ought to be a time for remembering—those living with the infection, yes, but also how society treats them.

Fortunately, there are those, especially in Congress, advocating to end the FDA’s blood prohibition for MSM. Sens. Tammy Baldwin (D-WI) and Elizabeth Warren (D-MA), specifically, have led the charge, having written a letter to the FDA in 2016 calling for an end to the ban; the letter was signed by over 75 members of Congress. In light of Johnson & Johnson’s recent announcement, and an otherwise unfriendly political administration, it’s more important than ever, it seems, to call on elected officials to push back against discriminatory policies.

The pushback against the waiting period isn’t limited to Congress, however. Colleges in the United States and around the world have ended blood drives on their campuses to protest the policy. Advocacy organizations like the Human Rights Campaign have lobbied the FDA to change the donor questionnaire to “focus on more refined and specific behavioral criteria, like recent sexual histories that include unprotected sex or significant numbers of sexual partners over the previous year.” These changes would speak to a larger cultural and political appetite for equal treatment in assessing whether individuals are fit to donate, regardless of sexual orientation.

Ensuring the fairness of blood donations says more about America, and where it’s at, than it does about who can and can’t give blood. The specter of homophobia has long loomed over American cultural and political life. It’s past time to vanquish those shadows.

Equality of treatment in blood donation would be a fair place to start.