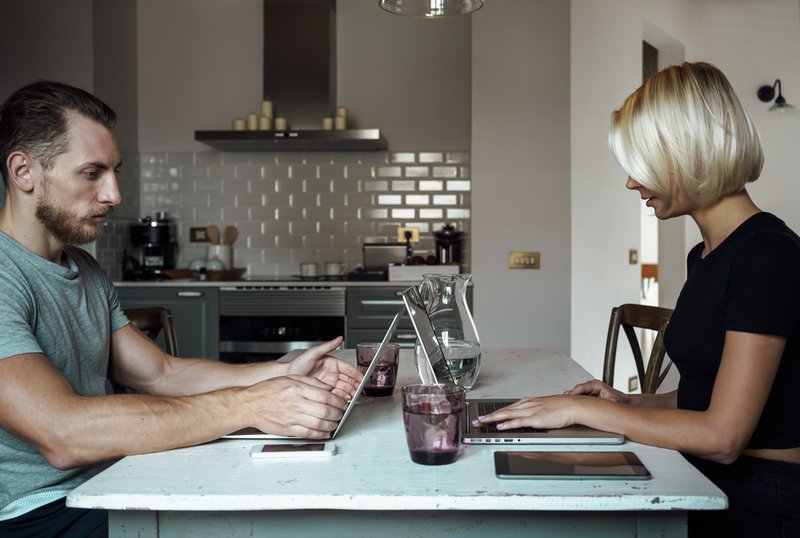 When I was finishing my book on time pressure and modern life and casting about for ideas for a book cover, a well-meaning editor of mine said he had a great one: “Picture this,” he said excitedly, “A woman in a business suit and high heels in soft focus. Steering a grocery cart.”

I groaned. The idea screamed “For Women Only.” And for too long, that’s where we’ve been stuck as a society when it comes to thinking about how we work and live. As if it only mattered to harried, overwhelmed women. As if failing to manage it all with aplomb has been simply a failing in women. As if the answer were simply for women to go back home, or take a bubble bath and quit whining. Everyone else—that is to say, men—had this work-life thing wired.

Except, of course, they don’t. Which is why my wish for 2016 is this: It’s time to Get Real. Time to break these so-called “work-life” issues out of the Mommy Zone and into the Mainstream where they’ve always belonged. Time to finally start making the workplace, culture and policy changes we all men, women, people with kids or aging parents, people without them, married and single, Millennial, Gen X, Baby Boomer, middle class, working class, rich, poor—need to live our best lives.

There’s no doubt, as time diaries and other data show, that women are time-starved and stretched and still expected to assume most responsibility not just for the housework and child care, but for the mentally taxing tasks of planning and organizing it all, often even when they’re the primary breadwinner.

But let’s get real: Women aren’t the only ones feeling overwhelmed, stressed out and stuck. Recent studies have found that men, too, are not only stressed by the conflicting demands of work and life, but that they’re more stressed out about it than women. Why? Because our workplace cultures are set up to reward those who have no life, those who work like a Wall Street dealmaker with a perpetual billion dollar deal on, or those willing to sleep under their desks like at a high-tech in 24-7 start up mode.

Those insane demands and outsize rewards for meeting them have put women in a tough spot: if caregiving responsibilities keep them from working all hours, they’re seen as less committed. If they do work those hours, they’re dinged for shirking family responsibilities. But the demands are also punishing to men who openly try to be more fully involved in home, and more than a “distant paycheck.” They can be passed over for promotion, seen as wimps or fired.

And what are those long work hours for? Let’s get real: The United States works among the longest hours of any advanced economy, but it is not the most productive per hour. That efficiency goes to countries like Norway. Economists like Stanford’s John Pencavel have found a “productivity cliff”—that productivity drops steeply after a 50-hour work week, and drops off a cliff after 55 hours—and that exhausted employees are not only unproductive, but are also more prone to costly “errors, accidents, and sickness.” “Is it possible,” Pencavel wrote, “that employers were unaware that hours could be reduced without loss of output?”

And, though we like to think that technology and information overload is what’s keeping us tied to work, Indiana University sociologist Youngjoo Cha has found that work hours started creeping up in the 1980s. Some feminist scholars have noted that work hours started to get crazy about a decade after women entered the workforce en masse, right when they would have been ready to rise into positions of power. Could it be, they ask, that these punishing work hours are simply another way to keep both men and women stuck in traditional gender roles?

And let’s get really real: That, not productivity, is what long hours are accomplishing. Research is finding that healthy, well-rested workers do better work. Neuroscience shows that inspiration, insight and creative thinking come not by putting in long, grinding hours, but by regularly giving your brain a break, and being happy. And let’s remember that the wolves of Wall Street bragging about those long hours at the office got us into a global financial crisis, and that 95 percent of startups fail.

When we talk about flexible work, what image comes to mind? It’s that same dang woman with the ‘80s shoulder pads and grocery cart, right? Yet let’s get real: Ellen Galinsky, head of The Families and Work Institute, told me that their research shows that men actually work more flexible schedules than women do. Men even telecommute more than women. Why? Because more men are in positions of power. Affinity bias, or the Old Boys Network, ensures that men stay in those positions of power. And when you have power, you can control your time.

So let’s stop talking about how women lack ambition, or that they don’t have the drive – or the capability – to get to the corner office. Let’s get real: It’s time to carve different paths to the top, to redesign the way we work for everyone, even in the corner office, to reward focus, not multi-tasking, to value effectiveness, performance and results, and not wear our long hours in the office like a badge of honor.

Let’s stop writing headlines about how workers are getting “perks” when a company announces a new paid leave policy, or how a successful company “pampers” workers if the work culture is organized around effective work, and values employees who have full lives outside of work —with on site child care, sabbaticals for volunteer work, lunch time yoga classes or surfing and office doors that are locked over the weekend to keep people from coming to work.

When I was reporting in Denmark, a country about as productive per hour as the United States, even with more than a month of vacation—which, unlike our nation of “work martyrs,” everyone takes—rather than rewarding long hours of work, people who can’t get their work done in 37.5 hours in a week are seen as inefficient. They get their work done. They spend time with their families. They enjoy some of the longest stretches of uninterrupted, quality leisure time of people in any advanced economy. I sat in on “catalogue classes” that are widely available to all, simply “for the wisdom and enjoyment of humanity.” Denmark also has generous paid parental leave for men and women. Universal, high quality child care. A minister of Gender Equality in the cabinet. And the Danes are, not surprisingly, the happiest people, with the happiest children, of any country in the world.

So let’s get real: Denmark is not Shangri-La. The United States is one of the wealthiest, diverse and most dynamic countries on earth. But we are also the only advanced economy with no national paid leave program for the parents of newborn children, for people who get sick, as people do, or for people who must increasingly care for aging parents. Some states have figured out their own schemes, paid for entirely by workers, and studies have found healthier families, happier and more loyal workers, virtually no fraud (as opposed business groups predicted), and a neutral to positive effect on business productivity and bottom line.

Issues like paid leave and accessible child care are finally making their way into the presidential election. For the first time ever, both Republican and Democratic candidates are not only talking about these work-life policies as key to healthy families, communities and a robust economy, but putting forward proposals.

Some lawmakers balk at the idea of national policies, and say that the decision about paid leave should be left up to the private sector, and that child care is the private responsibility of individual families. But let’s get real: Right now, only 13 percent of the civilian U.S. workforce has access to paid parental leave. That’s up from 12 percent last year, the Department of Labor reports. At this rate of growth, it will take 87 years to get to 100 percent. That’s the year 2102.

And when it comes to childcare, the numbers simply don’t work: child care costs are second only to mortgage or rent for most families. The cost of infant care exceeds the cost of public university in more than 30 states. Some people who would like to work can’t afford to. And yet child care workers are still earning poverty wages – about the same as a bell hop or parking lot attendant.

I was talking recently with Brad Harrington, director of Boston College’s Center for Work and Family who has pioneered much of the research on the evolving roles of men and fatherhood. We were lamenting how, when you say “work-life,” or “work-family,” people’s eyes tend to glaze over. Up rises the specter of that woman in a power business suit, wearing heels and wielding a shopping cart. We wondered if what we needed to grab people’s attention, and convince them how central these issues are, is new language.

But I’ve come to see that it’s not vocabulary that needs changing. It’s our thinking. That these issues have languished so long on the Mommy track/Women’s Initiative backwater is nothing short of a colossal failure of imagination. Now it’s up to all of us to get real, to think bigger, and begin to make the real changes we all need in order to live a good life not in 2102, but in 2016.