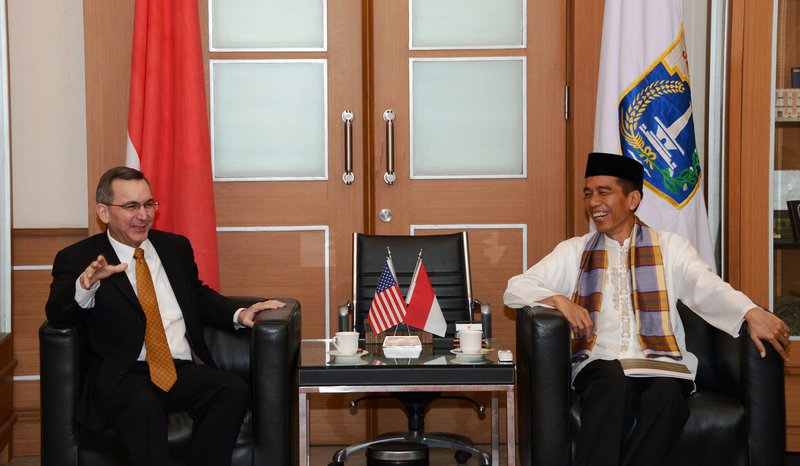 In March, two gay men in Banda Aceh, Indonesia, were spirited away from their room by a group of vigilantes. A recording of the incident shows both men naked while being interrogated over allegations of same-sex activity. They were detained by local police officers for almost two months before they were then publicly caned 83 times. In April, another 14 gay men were arrested, this time in Surabaya, and forced to undergo HIV testing. Their names, photos, and statuses were publicized. And last month in Jakarta, police raided a popular gay sauna and reportedly arrested 141 people in the process.

While Indonesia has historically prided itself as a stronghold of moderation, these recent events shine a light on just how tenuous this self-perception is—and how the country’s LGBTQ community is feeling the brunt of a rapidly moving political landscape.

Understanding these changes requires that we rewind to last year, when anti-LGBTQ bigotry in Indonesia really gained momentum. In 2016, a series of politicians began lobbing unprompted barbs at the LGBTQ community. Higher Education Minister Muhammad Nasir, for instance, sought to bar LGBTQ students from campuses, and Defense Minister Ryamizard Ryacudu claimed that the country’s LGBTQ movement poses more of a threat than nuclear war. The Indonesian Psychiatrists Association later released a statement saying that gay and bisexual people have “psychiatric problems.” And by the end of the year, the country was making moves to ban gay dating apps.

Hate speech and negative comments attended this growing intolerance. While some may dismiss this vitriol since it’s without any apparent legal implications, it still emboldens religious hardliners and merciless politicians to openly discriminate against and exploit LGBTQ citizens for their own ends. And this has consequences: As documented by the Arus Pelangi advocacy group, anti-LGBTQ violence between January and March of last year plateaued at an unprecedented height of 142 cases within only three months.

Yet the current wave of attacks differs from last year’s. Compared to the crackdown in 2016, the attacks we’re seeing now intrude private spaces, with police busting into private parties to make legally prohibited arbitrary arrests. There have also been reports that the accused haven’t been allowed access to legal assistance during the process. And this is all the more troubling in light of the fact that, except in Aceh—a small part of the country that follows strict Islamic law—homosexuality isn’t illegal in Indonesia, though there are 47 laws and local ordinances, including an anti-pornography law, that are often used specifically to discriminate against the country’s LGBTQ citizens.

Since the crackdown, several attempts to bring criminalization to the national level have surfaced. A group called Aliansi Cinta Keluarga has petitioned for a judicial review of Indonesia’s Book of Criminal Codes, which aims to criminalize same-sex activities between two consenting adults by challenging definitions of adultery and sodomy.

This broader anti-LGBTQ vitriol has roots. Indonesia is in an era where ultranationalists are locked in competition with religious fundamentalists, as both vie for public support in order to win electoral votes—and, by extension, democratic power. LGBTQ citizens are often key pawns in this tug-of-war. Ultranationalists typically frame Indonesia’s LGBTQ community as a Western-born aberration—a “threat” to national sovereignty not suitable with the country’s ideology. And religious fundamentalists view the LGBTQ community as a sort of an anti-Islam poison in need of being cured. Whatever the reason—religious moralism or populism—both sides use a marginalized group to score political points.

So what can—or should—happen next?

For one, support from the international community is needed now more than ever. As a member of the Human Rights Council and the Economic and Social Council, as well as one of the states to have ratified the International Covenant on Civil and Political Rights, Indonesia ought to be held accountable for upholding the ideals of these commitments, and pressure should be put on the government to stem anti-LGBTQ violence. And more still, any sort of international effort must be strategically tied to raising awareness within local communities and to supporting more localized grassroots organizing.

This latest crackdown probably won’t stop here. There will likely be more arrests and discrimination against Indonesia’s LGBTQ community—especially if groups continue to see political wins to be made in agitating public opinion. And so the dizzying challenge ahead lies with those in authority: Will they have the moral mettle to protect the rights of LGBTQ citizens, and ensure they’re not swallowed up in a rising tide of extremism?