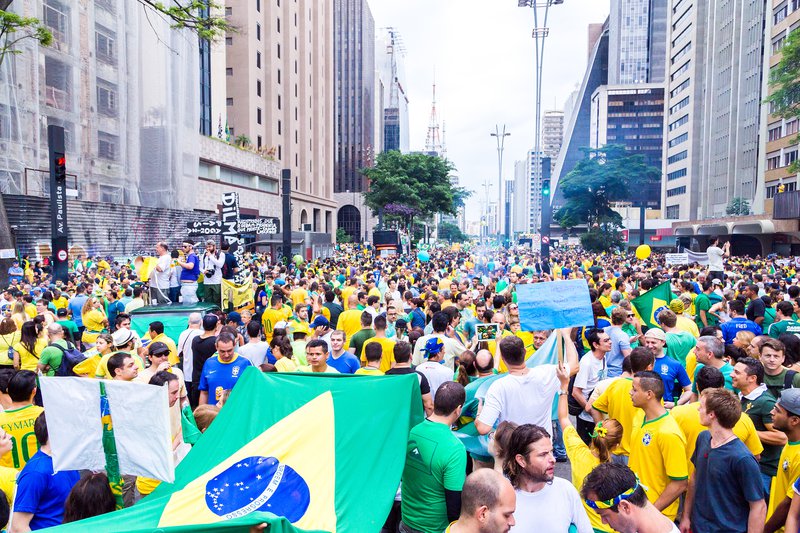 The flames that consumed the National Museum of Brazil in Rio de Janeiro—flames that destroyed more than 20 million treasures that told of Brazil’s and the world’s histories—earlier this month work like an allegory for the political situation the country finds itself in right now. Brazil is on fire. And regardless of the results of the upcoming presidential election, it doesn’t seem as if the South American giant will find any semblance of reprieve in the near future.

Last Thursday, the frontrunner of Brazil’s presidential election, Jair Bolsonaro, was stabbed in the stomach at a campaign rally in Juiz de Fora, a city in southeast Brazil. Meanwhile, Luis Inácio Lula da Silva, Brazil’s former president, was recently sentenced to 12 years in jail on charges of corruption and money laundering, and exhausted all options as he attempted to appeal a court decision that rendered him ineligible to run in the elections. These two events, together with the start of the political campaigning season, have brought a new dynamic to the elections. Bolsonaro, an ultra-conservative military officer-turned-politician, not only leads in the polls—he also currently has at least double the voter intention of any other candidate in the race.

Less than a month away, Brazil’s October 7 general elections are one of the most important political contests in the country’s recent history. It follows four years of political and economic turmoil that ravaged the country, leaving its political class either jailed or distrusted, millions of Brazilians unemployed, and still others terrified of being killed in a country that broke its own record for the number of murders in a single year. The outcome of this election will likely set the stage for the murky years to come, be those years of recovery—or persistent chaos.

In a sense, this election could’ve been the light at the end of the tunnel: the opportunity to restore Brazilians’ faith in democracy and get their country back on track. That potential, instead, seems to be vanishing. With the largest number of candidates—12—since Brazil’s first democratic election in 1989, the October elections have become scenes of either uninspiring and establishment-like rhetoric or, even worse, hateful and divisive confrontations.

Indeed, Bolsonaro’s stabbing is only the latest of a series of events that shows that the country is still far from overcoming political turmoil and toxic partisanship. In the aftermath of the attack, social media was inundated by posts that questioned the attack. A post by a Facebook page with more than 1.1 million followers called it fake news. Another post, written by Silas Malafaia—an influential evangelical pastor with 2.1 million followers and a Bolsonaro supporter—accused the attacker of being affiliated with the Workers’ Party. On Twitter, of the 1.7 million attack mentions, over 40 percent of them questioned its veracity. In all that is a sign that many Brazilians struggle to distinguish between the truth and a lie. But in a country where people’s elected officials have systematically lied to them, it’s hard to blame voters for their skepticism.

Bolsonaro has also seized the present disorder to promote a platform, dubbed “Project Phoenix,” that includes more rigorous penal laws and a revision of the 2003 disarmament statute; the privatization of certain state-owned companies (like Petrobras); and a conservative vision of social issues. It’s a platform that calls for Brazil above all—and God above even that. Worse still, the platform is catching on: Before the stabbing incident, 22 percent of Brazilians were already planning to vote for him. That number has risen to 24 percent since then.

Notably, the stabbing has also seemed to direct more support from women toward Bolsonaro, who initially struggled to garner meaningful interest from this particular demographic. Another poll conducted after the attack showed that 18 percent of the female electorate intended to vote for Bolsonaro—a 7-percent increase from previous polls. Data published by the Brazilian Forum of Public Security (BFPS), an independent organization that tracks national crime statistics, may at least partially explain this uptick. According to BFPS, in recent years, rapes have gone up by 8 percent (60,018), while 4,539 women have been murdered, which amounts to a 6.1 percent increase. A 2017 study published by BFPS showed that 79 percent of the women who responded said that they had been victims of some sort of violence in the last 12 months. While Bolsonaro’s reputation as a defender of women's rights is less than stellar—in 2003, he told a female deputy in congress that he wouldn’t rape her because she “wasn't worthy of it”—the apparent contradiction could be an indicator of a larger trend: that Brazilians are afraid. And this fear of violence has transcended everything, and prodded a not-insignificant number of Brazilians to look more favorably on authoritarianism—just the sort Bolsonaro promises.

Of course, Bolsonaro’s victory is still up in the air. According to numbers published on Tuesday, even though Bolsonaro is ahead of all the other presidential hopefuls, he loses to three of them in the runoff, at least according to simulations.

One likely runoff would be between Bolsonaro and Ciro Gomes, a center-left candidate running for president for the third time and whose political career spans 37 years. It’s likely that many Lula voters will gravitate toward Gomes, who’s been critical of Bolsonaro. Another potential runoff would pit Bolsonaro against Marina Silva, representing the Sustainability Party, who was a senator of the state of Acre between 1995 and 2011 and the minister of the environment in 2003 (under Lula’s administration). This is also Silva’s third go at the presidency. The third potential runoff would include a race between Bolsonaro and Geraldo Alckmin, who served as the governor of Sao Paulo from 2001 to 2006 and from 2011 to 2018.

Lula’s lawyers worked to the very end to try to make him eligible to contest the election. They even introduced to the Supreme Electoral Court of Brazil a United Nation’s Human Rights Committee’s statement that urged Brazil’s government “not to prevent [Lula] from standing for election in the 2018 presidential elections, until his appeals before the courts have been completed in fair judicial proceedings.” But that appeal was denied. On top of that, the Workers’ Party (a.k.a. Lula’s party) had to abide by a September 11 deadline to choose a replacement for the running ticket. They chose Fernando Haddad, former mayor of Sao Paulo and vice presidential candidate on Lula’s ticket. As of Tuesday, Haddad was at 7 percent in the polls as the new nominee for the Workers’ Party. The party’s hope is that Lula’s support and the message that he’d still be involved in Haddad’s administration will be enough for the ticket to make it to the runoff election on October 28. In addition, the Party also hopes that Lula’s chance at freedom will increase with Haddad as Brazil’s next president. Suffice it to say that Haddad’s candidacy, and what that might mean for Lula’s future, is likely to stir up more conflict.

The October 7 elections are still a Pandora’s box. When Brazilians head to the polls, they will find themselves choosing between a candidate who’s failed to inspire the majority of the electorate, and a man who’s become infamous for his penchant for making misogynist, racist, and homophobic statements. For many, it will be a matter of picking their poison. Regardless of whether Bolsonaro’s Project Phoenix turns out to be what Brazilians want, it’s still far from certain if the South American country will experience the rebirth it so desperately needs.