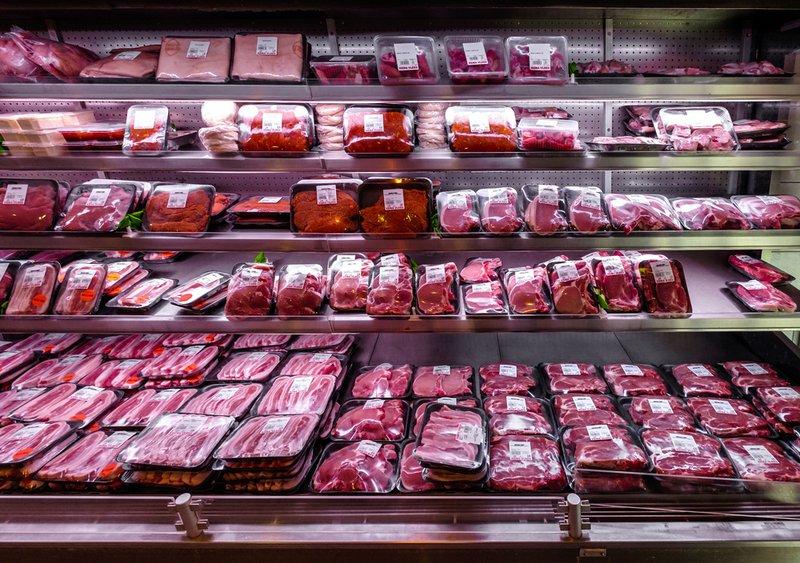 The following is adapted from Billion Dollar Burger: Inside Big Tech’s Race for the Future of Food by Chase Purdy, with permission from Portfolio, an imprint of Penguin Publishing Group, a division of Penguin Random House LLC.  (Copyright © 2020 by Chase Purdy)

I slide my pen and notepad to the side. It’s a sunny afternoon in 2018. Scooting my metal stool up to the edge of a tabletop in JUST’s impressive food laboratory, I peer around me. This thing I’m waiting to see is supposed to be the powder keg that sets off a culinary shift—much talked about, rarely seen, and almost never tasted.

JUST’s company headquarters sits in the heart of San Francisco’s Mission District. All around me, teams of scientists are using expensive lab equipment to dive deep into the inner lives of plants, exploring the tiny components that make them unique in an effort to figure out how they can be used to make new types of food. What plant proteins can work as emulsifiers? Which ones can withstand stovetop heat? In a corner of the lab, a half dozen robotic arms sit in big clear boxes, a few of them swiveling to and fro, analyzing all manner of foodstuff: Testing and cataloging the different aspects of plants that have been collected by JUST from all across the world in hopes they’ll prove beneficial.

I’d heard about this food before, of course—the stuff I’ve come to taste. It was only five years earlier that Mark Post had unveiled his burger. In those years between, pictures of early renditions of cell-cultured meat haven’t been too tough to find—but even as a reporter charged with covering the global meat industry, I still hadn’t seen any cell-cultured meat up close for myself, let alone had the opportunity to taste the stuff.

When it does arrive, it’s on a small white plate, artfully wreathed by a fan of toasted sourdough and a distracting sprig of greenery. A lab technician slides the plate in front of me and I let it sit there for a moment.

“More people have gone into outer space than have tried clean meat,” he tells me. More than five hundred people had been in space at that point. Only dozens could say they had tasted meat grown from animal cells. I was about to be inducted into an exclusive club.

I reached for a slice of toast, took a small butter knife, and dipped it into the main attraction: a dollop of golden-beige paste. Am I ready for this? I wondered, scraping the pâté across the bread. Until this moment, probably like you, every bit of meat I’d ever tasted had come from a once-sentient creature.

This particular dish was grown from duck cells. A lot of the companies growing cell-cultured meat chose to tackle meat from birds first. Avian cells often grow better in cultured settings than mammalian cells do. For starters, it’s easier to tinker with them and get them to do what you want—they have better plasticity. Mammal cells are harder to coax into compliance; source animals must be young because they have healthier muscle stem cells, for instance. By contrast, scientists have learned that muscle stem cells, sometimes even from older birds, are still efficient for proliferation in a laboratory setting.

I bring the toast up to my mouth and take a bite, chewing for a moment, savoring—and judging—the pâté’s silky texture and rich aftertaste. My eyes, mouth, and nose instinctively registered what I was eating as meat—but crackling across the buzzing synapses of my brain was only one thought: Cells!

I leaned forward for another helping, smearing more pâté onto a second slice of bread. As I chewed, a competitive game of tug-of-war between cold logic and cautious emotion unfolded in my mind. Of course, everything we eat is ultimately just a bunch of cells—the bananas we peel, the steaks we marinate, the potatoes we boil and simmer—and yet, in that moment, the thing I was swallowing seemed somehow alien. The pâté placed before me was the result of decades of scientific tinkering and the subject of science fiction. It was a dream product in the eyes of scientists and activists—foie gras grown not inside the tortured liver of a duck, but inside the walls of a Silicon Valley laboratory.

It was surreal but deeply compelling. That pasty clump of cells spread over toast represented something much bigger and more globally significant: a preface to a growing food movement that’s seeking to provide an ethical solution to the many unethical problems of the modern food system. By harvesting animal cells and quite literally growing them into fat and muscle tissue inside industrial bioreactors, humans have figured out how to create the exact same meats we’ve eaten for more than half a million years.

In doing so, those scientists hope to enable us to sidestep the need to slaughter billions of animals annually—and theoretically, in time, eliminate the need for an industrial farming system that pumps an alarming amount of greenhouse gases into the Earth’s warming atmosphere each year. Scientists agree that animal agriculture is responsible for about 14 percent of greenhouse gas emissions.

Fully wrapping our heads around the impact of the animal agriculture system we’ve always known is mind-bogglingly difficult. Lots of scientists attempt to measure the full environmental footprint of animal agriculture, and almost all of them have run into fierce sets of critics who challenge their methodologies and motives. Did the scientist measure the life cycle of a single animal and then multiply those data to represent its specific sector? Did they include data on the energy used to grow, manage, and transport the feed grain for cows, pigs, chickens, and other animals? How about factoring in deforestation to make room for grazing? Or the long impact of water pollution from nitrous oxide in manure?

Those working on cell-cultured meat understand that by addressing these issues, they’ll be helping to bring that number down. They’ll be pushing back against the planet’s march toward a full-blown climate crisis, one that already promises to reshape where and how humans live.

In 2006, the United Nations Food and Agriculture Organization published a landmark report that estimated animal farming is the source of some 18 percent of total greenhouse gas emissions, more than all the cars, ships, trains, and planes that crisscross the globe belching smoke. The report said 9 percent of the globe’s human-related carbon dioxide emissions could be tied back to animal agriculture, 37 percent of methane emissions, and 65 percent of nitrous oxide (mostly from cow manure).

The report got a lot of attention and triggered a wave of people—activists and entrepreneurs alike—to take action. But it didn’t go unchallenged, and since then, scientists have produced more nuanced findings.

The beef and dairy industries get most of the attention, as they contribute 41 percent and 20 percent of the sector’s overall greenhouse gas emissions, respectively. The pork industry creates about 9 percent of emissions, and the broiler chicken and egg industries collectively contribute about 8 percent. Cows do more damage because of their digestive process, which, through fermentation in their four stomachs, creates a lot of methane gas. Once released into the atmosphere, methane has about twenty times the heat-trapping power as carbon.

Just how much methane a single, 1,200-pound cow produces each year depends entirely on what the animal is fed. But scientists often cite approximately 100 kilograms of methane—about the same as a car burning through more than 230 gallons of gasoline.

Then there’s the inherent wastefulness of animal agriculture. It takes about 6 pounds of animal feed to produce 1 pound of beef, 3.5 pounds of feed for 1 pound of pork, and 2 pounds for a single pound of chicken. Animal agriculture relies on growing plant protein—vast fields of corn and soybeans—only to cycle it through an animal that has to be killed to yield less weight in food than the plants it ate. Of course, plant protein doesn’t have the same nutritional profile as animal protein. But these numbers are the foundation of the compelling case for reducing consumption of meat in order to be better stewards of the planet, especially as estimates show the number of mouths to feed on earth—10 billion by 2050—is steadily rising.

Environmental sustainability is a compelling reason to consider giving up meat, but there are other reasons, too—especially animal welfare. The farms that raise chickens and pigs have gotten bigger and more opaque, not smaller and more transparent. Data collected by the U.S. Department of Agriculture (USDA) show the number of total farms in America has declined from 6.8 million in 1935 to fewer than 2.06 million in 2016—the result of a jaw-dropping amount of consolidation that has wiped out family farms. That’s nearly a 70 percent decline. USDA data show the American dairy herd shrank by about 60 percent in the last ninety years, but only because humans figured out how to jury-rig individual cows to produce more than 400 percent more pounds of milk fat per head, according to data compiled by the USDA’s National Agricultural Statistics Service. And the fishing industry remains one of the world’s murkiest, with little oversight. We have depleted vast stores of the planet’s fish population (we kill an estimated 1 trillion fish a year); meanwhile, the fishing industry has relied on slave labor.

Suddenly, the prospect of finding an alternative way to create real meat becomes even more enticing.

Bowman sets another plate before me, this time bearing a more familiar sight: tacos. In front of me are two corn tortillas topped with cilantro and postage stamp-size bits of duck chorizo. It was grown from the same batch of cells used to make the pâté. I tilt my head, peering at the plate at tabletop level and playing inspector, as if I might discover something amiss. I imagine throwing a finger into the air to say, “This is close, but the meat looks a bit rubbery.”

But of course I don’t. Any restaurant could have served the same dish to me, and I would have been fooled. The seasoned chorizo tasted and felt just as I might expect, as moist and richly flavored as anything I’d get from the myriad taco stands outside JUST’s office in the historically Latino Mission District. And on a biological level, there was no difference between my lab-concocted taco and the chorizo I could get at the taco stand outside.

Are we ready? I wondered.