If Feminism Is about Choice, Then This Election Is, Too 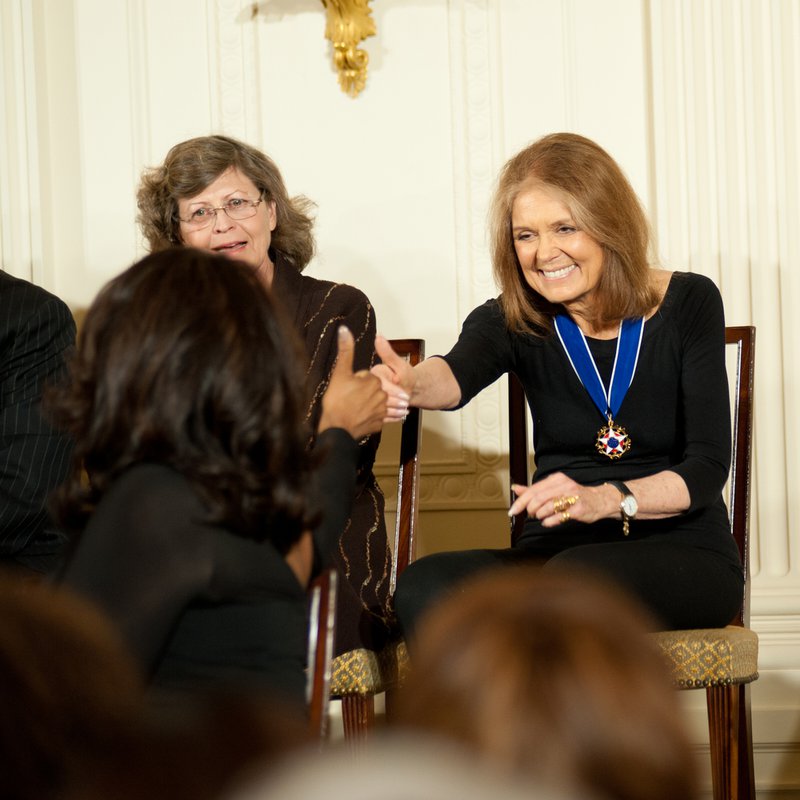 Mary Lewis-Pierce doesn't care where the boys are. No, really. After Gloria Steinem told Bill Maher that the reason young women are flocking to Bernie Sanders' campaign is because "the boys are with Bernie," Lewis-Pierce tweeted simply, "I'm a lesbian. I'm voting for Bernie Sanders. #NotHereForBoys."

She wasn’t the only one with something to say on the matter: Anoa Changa, an Atlanta resident and member of the group African Americans for Bernie, helped organize a petition demanding that Steinem apologize for her comments (which she later did). Thousands of others tweeted, chimed in on Facebook, and wrote eloquent op-eds.

Indeed, the silver lining of Steinem and former Secretary of State Madeline Albright's weekend commentary scolding women who support Sen. Sanders over former Secretary of State Hillary Rodham Clinton may have been the torrent of thoughtful and comical responses it provoked. The two icons inspired thousands of female (and male) voters to surface an important point: Most say it's policy—not gender—that determined who they decided to support in this election.

Isn’t that a win for the feminist movement they worked so hard to build? In some quarters, it looks like we’re maturing beyond simple identity politics.

When it comes to understanding and accepting the decisions of female voters, Changa said in an interview that it’s important to look “at the whole picture...We’re fighting for greater equality for women across the board, but we’re also fighting for our families and our communities.” We can’t limit ourselves to understanding this dynamic through “traditional women’s issues,” she says, “because really, all issues are women’s issues.”

Case in point: Environmental policy was one of the issues that attracted Changa to Sanders’ side. Two years ago, while she was living in West Virginia with her two kids, there was an industrial chemical spill nearby that poisoned their water source.

For five months, Changa, who is a single mom, ran her household on bottled water. She warmed up water and used a shower nozzle intended for camping to bathe her kids. For laundry, she traveled to a friend’s house outside the affected area. Sometimes, she would use rainwater or melted snow for cleaning. All that bottled water was expensive, though Changa says she doesn’t recall the exact cost.

It was an experience that opened her eyes to issues of corporate negligence and lax government regulation of big business and coal. “I became more aware about issues surrounding fracking in West Virginia and other states as well as the threat to our clean water and health overall...Sen. Sanders is firmly against fracking, and has considered the health concerns and other issues surrounding it,” she explains. “That’s very important to me.” Unlike Sanders, Clinton has not said she will ban fracking, and was accused of “selling fracking to the world” during her tenure as secretary of state.

Why’s the choice of voters like Changa to think less about gender and more about policy such a good thing? Because it means more people may be starting to recognize that there's little difference between saying, "I'm not voting for her because she's a woman," and "I'm voting for her because she's a woman." Either mentality reduces a complex, multi-faceted human into one sliver of her identity—a part that may not play a large role in shaping her platform, values, and policy priorities. Lewis-Pierce, for example, is a parent advocate for families with kids in special education, has seen the negative impact that the push for charter schools in Boston has had on kids in traditional public schools, and is consequently feeling the Bern because of Sanders’ stance against privatising education. While Clinton is against charter schools as they are now, Sanders is against the privatization of schools, full stop.

Of course, this gets not only to the reality of prioritized policies, but also to the idea that different parts of someone’s identity—race, gender, sexual orientation, class—are intertwined, and cannot be examined separately from each other when it comes to thinking about how each part influences behavior, or how an individual experiences oppression from various social institutions. Yes, we all face certain issues as women. But that can’t diminish or discount the other issues we face as members of different identity groups. This is a point that women of color have been making for decades.

“Sometimes when older white women feminists say ‘we women,’ they ignore diverse ranges of experiences–whether you’re transgender, a lesbian, a woman of color, or poor,” explained Changa, the attorney who helped organize the Steinem petition. Interestingly, this is a criticism that many people of color have leveled against the Sanders campaign and its focus on fiscal inequality.

For many women, long-term policy considerations are trumping the short-term win of checking off a historic election box. “I don’t see the shattering of the glass ceiling as the end all be all of importance, especially in a race like this, and in a world like this,” says Julia Siergiey Juarez, a 37-year-old bilingual insurance benefits counselor. “Yes, it’s very important to me as a woman to see women succeed and to encourage that in the women around me, but not at the expense of other issues that are equally as important.” For Juarez, who is from Vermont and cast her first vote for Sanders at 18 in 1996, those issues are campaign finance reform and healthcare—she’s all for a single-payer healthcare system, even though it would mean her own job would be affected. Clinton, who plans to “defend and expand” the Affordable Care Act, said in late January that Sanders’ single-payer system would “never, ever come to pass” and pushing for it would launch America back into a “terrible national debate” that could leave sick Americans with gaps in insurance coverage. Both candidates have similar stances on campaign finance reform, vowing to reverse or overturn the Citizens United Supreme Court decision that allowed unlimited money from corporations and unions to flow to candidates, and to fix the public campaign financing system. But unlike Clinton, Sanders isn’t funded by any official superPACs, although he is supported by the union National Nurses United. To Juarez, Sanders is walking the talk, whereas Clinton “says a lot of things that sound right with regards to getting big money and shadow investors out of the political process, but it’s very disingenuous when you research who has openly donated to her campaign...it comes back to trust and confidence issues.”

Holly LeCraw, a 49-year-old novelist and mother of three from Boston, decided to support Bernie Sanders because she prefers his plan to shrink income inequality. In particular, she’s passionate about raising the minimum wage (Sanders is calling for $15, while Clinton argues for $12) and slashing college costs (one of her kids is in college, and the other two are close behind her). “When Bernie came out talking about free college education…I didn’t think anyone would even go there,” LeCraw says. “I don't want to see the next generation saddled with these impossible debts.” Clinton doesn’t either - but rather than free public education, she’s proposing more income-based repayments, greater access to tuition grants, and a plan that would allow students to refinance student loans at lower rates.

As a feminist, LeCraw she says she’s glad to see Hillary up there, but that doesn’t mean she’ll automatically support her. "In 2016, we finally get a female candidate—and we're just supposed to be grateful, and vote for her even if we don't like her policies?"

In 2010, Steinem herself reminded us that feminism is not fueled on gratitude: "Susan B. Anthony said, 'Our job is not to make young women grateful, it's to make them ungrateful,'” she explained during an interview on the Joy Behar Show. “I want [young women] to go forward. Gratitude never radicalized anybody...we got mad because we were being treated unequally, and they are too." She repeated herself during the now infamous interview that got her into hot water with Bill Maher, saying “Gratitude never radicalized anybody. I did not say ‘thank you for the vote.’”

Feminism isn’t just about being grateful that we have a woman running for office—and feeling obliged to vote for her (the pressure to feel grateful, let it be known, is in fact a very gendered thing). It’s not about “imposing a moral obligation on women to vote a certain way” either - as the Washington Post’s Ruth Marcus wrote.

Feminism is about asking: Why aren’t there more women in politics to choose from? How do we boost the overall numbers? Which candidate, through their policies, will make it easier for more women to access the funding, networks, and education that they need to run for office? This last question is perhaps why Steinem and Albright didn’t feel similarly moved to make such statements in support of Sarah Palin—or Carly Fiorina before she ended her campaign earlier this week.

“Existing [campaign finance] structures don’t lend themselves to encouraging more participation of women and people of color [in the electorate],” Changa said. She’s encouraged by the way that Sanders talks about getting big money out of politics and moving towards public funding of elections, making it so that “people will be more likely to support candidates who not only look like them but represent their interests.” Though she acknowledges that both Sanders and Clinton have similar campaign finance reform platforms, “Sec. Clinton benefits immensely from the same system she claims she will fix...It’s hard to listen to someone say they will put an end to something when they too are part of the problem,” she says.

At the end of the day, many Sanders supporters acknowledge that his liberal, social-democratic policies that redefine and expand the role of government may not get through a conservative, tea-party led and controlled Congress intent on redefining and severely limiting government reach. Sanders’ policies may not pass in four years - or eight. Or ever. But they’re as attracted to his aspirational platform as they are his grand vision for the future.

“What Hillary is promising is incremental change, which is frankly just going to mean status quo ante,” says LeCraw. “Bernie is promising the moon. We won’t get there – but maybe we’ll leave the atmosphere.”

Even better: Perhaps we’ll land in a place where there’s a still wider array of feminist candidates from whom to choose.