How Egg Freezing Became a Matter of National Security 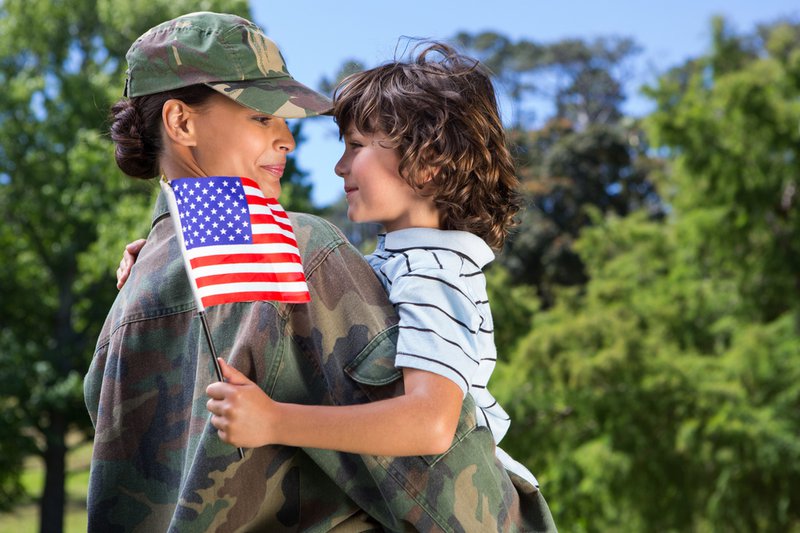 When Captain Margie Finlay joined the Air Force in the early 1970s, she found herself more in the milieu of Emily Post than fighter pilot. Finlay recalled in a StoryCorps recording featured on NPR: "We actually had classes where they would bring in ladies that did makeup and hair, and we would practice how to dial a phone with a pencil. I remember sitting there looking at all of us thinking, 'This is kind of silly.' I wanted to get out there and shoot a gun."

While these lessons in personal grooming and clerical prowess certainly seem like a throwback to the Mad Men era, they pale alongside what came next for Finlay. When she became pregnant with her son, her sergeant told her she would have to leave the military unless the child’s father gave his permission—which he refused to do. Without her baby’s father’s signature, Finlay was out (though she would re-join over a decade later). And she was far from alone: Until a 1976 court ruling in which a woman sued the Marine Corps over its policy to discharge (and notify the parents of) pregnant service members, women were often automatically discharged from the military when they became pregnant. Policies requiring spousal consent (for military and civilian women alike) for pregnancy-related matters lingered even after the Pregnancy Discrimination Act, passed two years later; spousal notification for abortion was not struck down until 1992.

Fast-forward to today: two critical factors have changed dramatically when it comes to fertility and military service. Not only are they no longer considered incompatible, but the highest military leadership—Defense Secretary Ash Carter—has also made giving both women and men more resources and greater agency when it comes to their fertility a significant priority. Earlier this year, as part of a series of changes to policies governing parental leave and childcare called “Force of the Future,” Carter announced that the Defense Department will cover the cost of freezing eggs or sperm through a $150 million pilot program for active duty service members. While current policies do not provide coverage for treatments like IVF post-discharge, Carter also indicated that the department is evaluating how it might someday be able to provide that and other reproductive technologies to a wider pool of service members (according to the DoD website, reduced-cost fertility treatment is currently available at six locations). The program will be evaluated after two years and could be made permanent. This change could not only make for a historic change for the military and foster greater gender parity in a traditionally unequal field; it could also help ameliorate some of the sacrifices and challenges faced by both men and women soldiers.

While less-discussed than traumatic brain injury, the era of IED warfare has also brought with it a dramatic increase in devastating injuries to the lower body and reproductive organs. For men—and now, women—serving in combat roles, knowing that they have an insurance policy to become parents someday even should such an injury befall them could bring much-needed peace of mind. At the same time, the Pentagon—one of the largest employers around—is looking for ways to keep its top talent. Currently, military women in their childbearing years have a retention rate 30 percent lower than male counterparts; with the option to freeze their eggs, the Pentagon is hoping to offer active-duty women the flexibility to remain deployed abroad or pursue military promotion with less worry about a biological clock ticking.

Debate immediately followed Carter’s announcement of the pilot program: will the military adequately account for (and convey to its soldiers) the risks and low success rates of reproductive technologies, especially in the event the draft is reinstated? What about the legal and ethical implications? Those questions remain open, but it’s clear that talent retention and promoting a family-friendly environment are the program’s main focus. In the past year, other high-profile employers, especially in the tech sector, have also made headlines for offering to pay the cost of freezing eggs in a bid to recruit and retain top female job candidates.

Moves in this direction from star players like Google, Apple, and Facebook—and from the Pentagon—come as little surprise to TechCongress Fellow John Costello, who served in the U.S. Navy doing intelligence work for six years and is a leading thinker in cyber warfare, emerging technologies, and information dominance. “When looking for the best talent,” he points out, “it’s best not to limit yourself. Both in the military and in tech, women are going to be the next major talent pool to be fought over.” Having worked closely in military, policy, and tech circles, Costello also identifies Millennials as a key constituency for these types of benefits. “Millennials tend to expect a bit more from their employers,” he says. “I think they’re seeking a relationship that the military has perfected: your employer as caretaker.”

And it isn’t just about attracting and keeping the best female talent, either—it’s been less discussed in the media coverage than egg freezing, but banking sperm (and preserving their fertility options overall) is a priority for men, too. Costello remembers talking with his (now ex) wife about using advanced reproductive technologies when they were both on active duty (she’s still in the military). While they ultimately had a son together, now four years old, reading about the pilot program “resonated with me quite a bit,” because the cost of gamete retrieval and storage was “really astronomical.” “We really couldn’t afford it,” he recalls, in part because it was a cost they couldn’t plan for. “The real worry was the cost of storage, because you don’t know [how long it will last]. Like they say, never a good time to have a kid. It could take years.”

Dr. Elspeth Ritchie, a retired Army colonel and psychiatrist and expert in military women’s health, trauma, and mental health issues, is working on a book on the military and sexual health that will address the problem for wounded veterans of intimacy post-injury. “I was absolutely delighted when Ash Carter made the announcement about banking sperm and freezing eggs,” Ritchie says. It’s been a hot topic of conversation among soldiers (and their wives and husbands) at conferences and meetings in her field, notably Intimacy After Injury, sponsored by the Bob Woodruff Foundation. She notes that the UK began offering the option to bank sperm before the US, and says now is an “interesting moment” the military’s approach to sexual and reproductive health. Whether it’s preserving the option to become pregnant, obtain an abortion, or take maternity leave, says Ritchie, the military has in the past sent an “implicit message to many women [to] ‘just deal.’ Women in the military don’t like to complain so they try to figure it out but then they don’t stay in.” Now, at least, the military is taking steps “to be able to say, ‘Yeah, well, deal—but we’ll help you figure out it.’” She hopes the advent of the program will “drive more couples to talk about” having a fertility plan. “I think this should become a part of the routine”—like arranging a will and life insurance—for anyone going into harm’s way: soldiers, firefighters, members of the Peace Corps. “I do think that [the military’s] saying concretely, ‘This is something we care about’ will drive the conversation forward in civilian life as well.”

Some civilian observers are cheering. “A military career is inherently more uncertain than a typical 9 to 5 job,” says Stephanie Stark, author of The Savvy Girl’s Guide to Egg Freezing.

“The government sometimes gets criticized for being slow to change and these proposed reforms place the military on the cutting-edge of the fertility programs that are offered within typical companies and should be applauded.” Stark also makes the point that even if the military opts not to cover in-vitro fertilization, the cost of IVF will still be “significantly reduced, since the egg retrieval and often-times expensive medication to produce the eggs will already be paid for.”

Others, like Center for Genetics and Society Executive Director Marcy Darnovsky, have reservations about the program’s potential impact on female service members. “If you’re in the military, and your commanders are saying or implying that egg freezing is safe and effective, you might tend to overlook the risks to your own health (including long-term ones, about which there's still shockingly little data) and to your future children (about which there's virtually no data). You might also assume that egg freezing really works, and tend to overlook just how scant information about success rates is.” Of pressing concern to her are the questions of informed consent and data collection. What kind of process will be in place “to convey full information to soldiers who may be considering accepting the offer, including about immediate and long-term risks to the women and risks to any future children?” And will the Pentagon “do any better than the commercial fertility industry, which despite decades of egg retrieval procedures has collected very little data about health outcomes, especially long term?” She sees hope that, since many soldiers remain in the VA system, the Pentagon can potentially collect and analyze data more effectively.

There also may be the temptation for military higher ups to think they can put all their eggs in one basket (pun intended with apologies), when, in reality, these changes must be one part of a larger solution. Analysts and observers of work-family integration in civilian life emphasize the interconnectedness of employer-provided fertility planning options and other progressive workplace policies like paid family leave. As Rachel Lehmann-Haupt, who wrote In Her Own Sweet Time: Egg Freezing and the New Frontiers of Family, put it recently on NPR’s “The Diane Rehm Show”: “Egg freezing is not a pill.” She meant that it will not single-handedly solve the problem of how to make it easier for anyone—military or civilian—to have a family and a job.

Ultimately, though, for many, the most important aspect of this pilot program is its acknowledgment and spotlighting of some of the fundamental changes to the nature of contemporary warfare, which is now shaped far more by explosions than gun battles. Traumatic brain injury gets more press, perhaps, but soldiers know how high their risk is for traumatic genital injury (and resulting infertility and sexual dysfunction) as well. In addition to paying to freeze reproductive cells, the Pentagon is also working to redesign protective gear such as body armor to shield the genitalia of both sexes. Johns Hopkins University is pioneering a penis transplant procedure, for which the first patients will likely be wounded veterans.

For John Costello, having a cost-free option for soldiers to meet these risks head-on is invaluable. When asked whether he would have participated in something like the pilot program while on active duty, he replied without hesitation. “There’s absolutely no doubt, if I knew I was going to go into harm’s way.” “Being removed from the gene pool in any way is extremely traumatic,” he continued. “If I knew in the back of my mind that there was a program like this, that would mitigate some of that [physical and] psychological damage,” it might help to cope with an unimaginable sense of loss.

Forty years ago, women who wanted to serve and to parent faced a different sort of loss. And today, while still preliminary (and perhaps imperfect), efforts exist to give women and men ways to avoid sacrificing parenthood for patriotic duty. Surely that is a sign of progress, one to keep tracking as combat opens to women next month—and one that we could imagine might please Captain Margie Finlay.