Forget the App, the Caucuses Were Always Broken 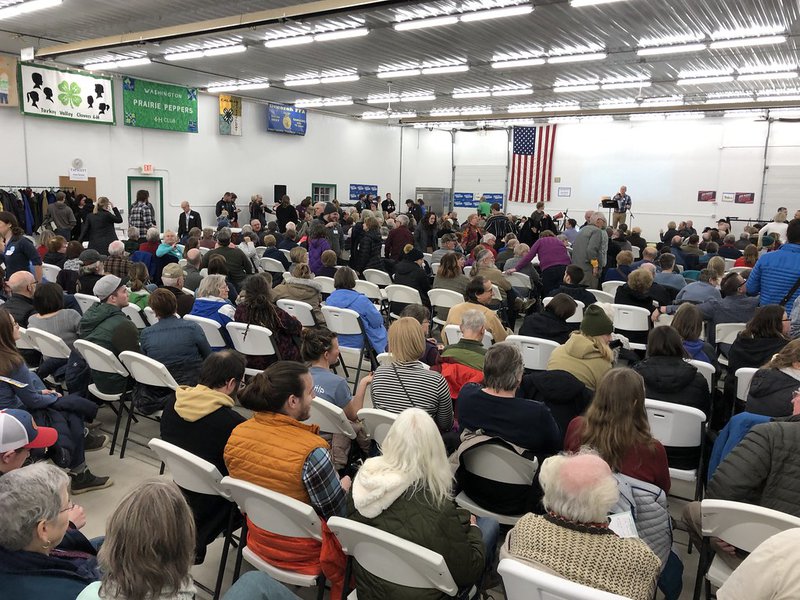 “Fiasco,” “debacle,” “an utter disaster.” In the wake of the Iowa caucus last week, critics have honed in on the failures of the new reporting app, citing it as proof of the caucuses’ obsolescence. But I was there on the ground, observing the entire process firsthand—and even before the results were due to come in, I’d already lost my faith in the caucuses.

Every political junkie dreams of going to the Iowa caucus. As an idealistic political science major, I’ve always wanted to see it in action—which is why I was so excited to fly to Iowa this year to volunteer for Sen. Elizabeth Warren.

For the most part, I left feeling fulfilled and proud of the work I did: I knocked on nearly 300 doors over three days and was privileged to meet Iowans of different backgrounds, perspectives, and political affiliations. Most of them took their singular role in the primaries seriously; many engaged with me at their doors and told me about the many campaign events they’d attended.

But my time in Iowa also served as a stark illustration of the caucuses’ flaws. I’ve criticized them before: They’re disenfranchising, especially for low-income people, and require attendance for hours at a given time. Anytime you increase the cost of participation, you’re likely to reduce the rate of participation. At dinner Sunday night before the caucus, our server told us this would be her first time caucusing, because she’s had to work every election since she became eligible to vote.

While knocking, I met a mom of four who owned her own business. She wanted to caucus for Elizabeth Warren, but that would require valuable time on a weeknight. What would she do with her kids? If her husband stayed with them, he wouldn’t be able to caucus. Finding child care might prevent another person from participating. Considering the Democratic Party consistently emphasizes voting rights as a core tenet, it’s unclear to me why caucuses are acceptable.

Don’t get me wrong, I understand their appeal. The personal one-on-one approach is unique, and the ability to voice your support for your second choice is attractive—especially in such a large field.

Still, I left my precinct convinced that the process was a profoundly flawed way to conduct democracy. And it wasn’t about the technology—I didn’t even know the app existed, let alone that there were problems with it. No, the biggest problem I saw was that of human error—a risk augmented by the sheer inconsistency with which the caucus rules were communicated.

This was immediately apparent in my precinct. Our chair had communicated different sets of rules to different teams prior to the caucus: We were told that we could only have one sign per campaign and that no speeches could be made, only to arrive and see campaigns put up more than a dozen signs. When it came time to start the caucus, a representative from each campaign was asked to make a speech about their candidate.

Worse, our chair miscommunicated the rules for the “realignment” period of the caucus—resulting in the loss of a caucus-goer for our campaign and costing us viability.

Then there’s the infamously knotty delegate math. Iowa, somewhat inconceivably, has different rules for rounding depending on whether caucus-goers cast a vote for their second choice. It’s confusing even for people who run the caucus—and, indeed, while getting results from the precinct chair, I noticed several mathematical errors that were going to cost a delegate from another campaign. Those errors were corrected—but with margins so tight at the precinct- and state-levels, innocent mistakes can be deadly.

Even before the results were due to come in, I’d already lost my faith in the caucuses.

Maybe my precinct was different, but with nearly 2,000 precincts in Iowa, it’s easy to imagine that many were placed in similar positions. In fact, the exact same rule mix-up was reported in the Marion 5 precinct, and miscounting at other precincts led to voters shifting outside of the official alignments. And in an echo of our experience, a volunteer for Sen. Amy Klobuchar wrote about his frustration when he was denied the opportunity to make a speech for her.

Finally, the process is made more chaotic by the way delegates are assigned to precincts, along with the viability thresholds. Two voters living on different sides of the same street might be able to caucus in different precincts—and, assuming they vote for the same candidate, it’s easy to imagine a scenario where that candidate is viable in one precinct but not the other (or rendered unviable because their voters aren’t in the same precinct).

Now that the results are somewhat more finalized, we know that Sen. Bernie Sanders earned 6,000+ more votes than Pete Buttigieg in both the first and second rounds—but that Buttigieg earned two more delegates due to the electoral college-like delegate allocation. Democrats—especially those who rail against the electoral college—shouldn’t accept a system that prioritizes the votes of some over others.

In short, Iowa needs to make some changes—and the most obvious step would be moving to a primary election. Voters, especially those juggling children and work, shouldn’t be constrained to a small window of time to participate in an election. Instead, the state should establish a range of voting hours to meet the varying needs of voters, allowing nurses, retail workers, and factory workers on the night shift the chance to vote. This would likely lead to more diverse participation—something sorely needed in light of Iowa’s representation woes.

Iowa should also allow early voting—people shouldn’t be punished for having to work on election day, and elderly or disabled voters should be able to avoid lines and hectic polling places. And if Iowa wants to continue allowing voters to express their second choice, it could consider implementing a ranked-choice voting system. Voters whose candidates fail to become viable could have their vote applied to their second-choice candidate—but on a statewide basis, not precinct-level. The ability to voice your support for a candidate shouldn’t be weighted based on the arbitrary, obscure designation of your voting precinct.

Participating in a democracy should be easy. People live busy lives, and they shouldn’t be forced to learn bafflingly complicated rules just to cast a vote. The caucuses might have their appeal, but it’s clear there are better ways to structure elections. A regular primary would allow more people—and a greater diversity of people—to take part in elections. And, as we learned in 2016, there’s far too much at stake to lose a single vote.