Feminism Doesn't Have to Be Comfortable for Everyone 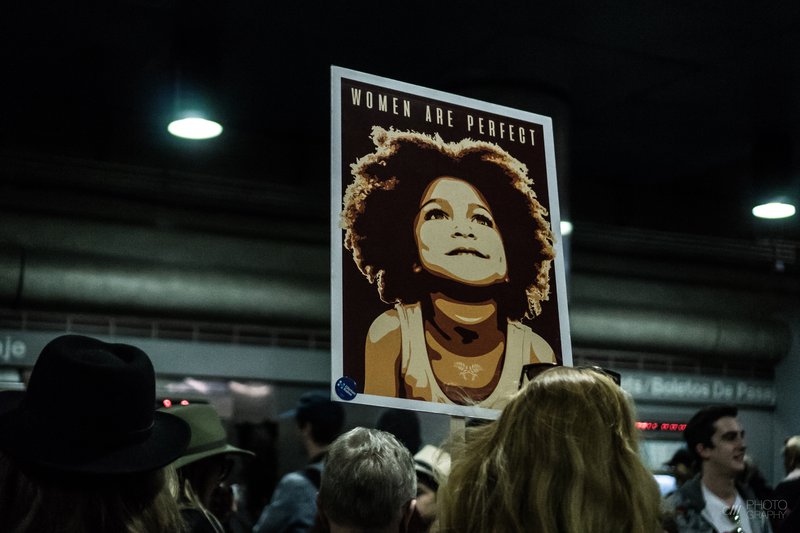 In the wake of the stinging defeat of our first female presidential nominee, feminists have, rightfully, taken a step back to reexamine their platform. But if the goal is to protest and build a broader coalitional front, intersectional feminism seems like it’s doing the opposite. Intersectionality alienates those who do not care—and forgive me for using this phrase—to check their privilege. It makes people uncomfortable. It forces us to call out our favorite celebrities for saying things like having a female-lead movie is more important than whitewashing. Or our favorite writers for publishing yet another tone-deaf and patronizing article on black femininity (no, Serena Williams did not singlehandedly destroy equality by posing in Sports Illustrated’s swimsuit issue). Or even our favorite presidential candidates for relying on votes from people of color without including them in any meaningful way in their policy platform.

But if the goal is equality, and I hope it is, then the trickle-down equality that mainstream feminism seems to advocate for is not enough. We should not strive for a palatable form of feminism, a feminism that ignores mass incarceration or immigrant detention conditions or voting suppression, or a feminism that celebrities can pull out when it’s convenient. Political activism, good political activism at least, will alienate people. If it didn’t, there would be no need for it.

It’s both comforting and disconcerting to know that this debate is nothing new. In 1870, when Congress passed the 15th Amendment, theoretically enabling black men to vote, white suffragists felt the best way to engender their cause nationally was to throw black people under the bus. Abolitionist and feminist-favorite Susan B. Anthony famously said, “I will cut off this right arm of mine before I will ever work or demand the ballot for the Negro and not the woman.”

This conflict came to a head in mid-1890s England, when Ida B. Wells—a black journalist, suffragist, and newspaper editor—confronted the “uncrowned queen of American democracy,” Frances Willard, over her refusal to condemn lynching in the South. Wells had crossed the Atlantic two years prior when Tom Moss, a respected black store owner in Memphis and a friend of Wells, was lynched alongside two of his friends after defending his store against an attack by whites. Outraged by the murder of her friends, Wells launched an extensive investigation of lynching and countered the “rape myth” used by white mobs to justify the murder of black Americans—a myth white women were complicit in. Because of her advocacy, the offices of Wells’ newspaper were destroyed, and she was forced to flee Memphis.

Both Willard and Wells were invited to speak before British temperance advocates in 1894. The women’s alcohol temperance movement was a powerful force in the greater push toward women’s suffrage. Willard was a strong advocate, stating in an 1890 interview with the New York Voice that the local tavern “is the Negro’s center of power…the colored race multiplies like the locusts of Egypt.” In 1894, Wells came to the lecture armed with a copy of the interview, and when asked her opinion of Willard, she chose to read Willard's own racist sentiments back to her. Wells knew that as a darling of both the temperance and suffrage movement, the British had a hard time believing that women like Willard could ignore the problem of lynching.

At its heart, the issue was a prototype of intersectionality: Black women could not afford to ignore the racial terror they were facing in the South, divisiveness be damned.

Willard responded not with temerity, but by doubling down on her racism. In an interview with a London newspaper following the lecture, she talked about her family’s abolitionist past (the 1890s version of “I have black friends”) before stating, “It is not fair that a plantation Negro who can neither read or write should be entrusted with the ballot.” Other newspapers called Wells “foul and slanderous,” painting her as a divisive “Sapphira” with a victimhood complex—similar to the backlash Black Lives Matter activists faced from the progressive left when they interrupted Bernie Sanders at an August 2015 rally in Seattle, or the reaction Jessica Williams faced when she attempted to explain the specific problems black women face in Hollywood to a room full of (mostly white) women.

Still, Wells ignored the gossip, and by the end of that year scored a clear victory in establishing the London Anti-Lynching Committee. The group included influential editors, ministers, college professors, members of Parliament—and even Willard.

Congress never passed a federal anti-lynching law (only apologizing in 2005 to nearly 200 descendants of mob violence for their lack of action). But Wells’ methods of direct confrontation sends a clear message down through the years and into the present: Feminists cannot be afraid to be viewed as disrespectful in the pursuit of true equality. Wells publicly shamed Willard for racist views that, at best, ignored the threat of racial violence black Americans lived under, and at worst, encouraged it. For it, she was called a “nasty-minded mulatress” by the New York Times.

Civility and a mainstream-friendly message may make more people more comfortable—but our preference, especially on the left, for comfort over moral ground is exactly why we still need to have this conversation in 2017.