The Expanding and Shrinking Lap of Luxury 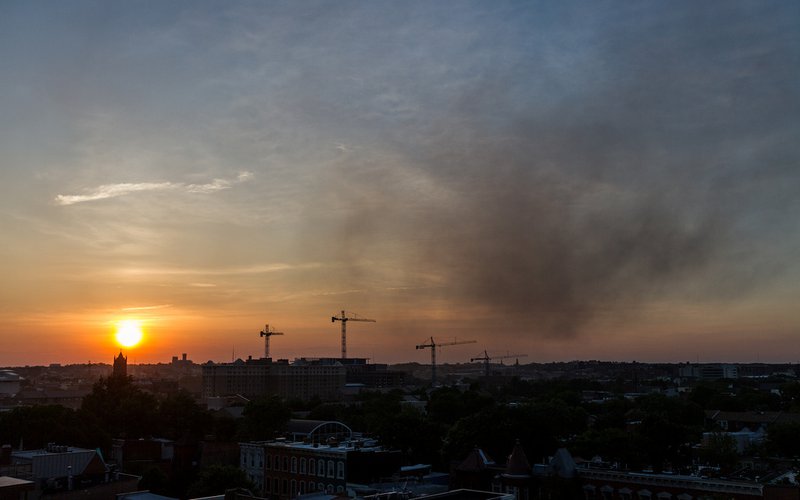 “District, Measured,” a blog from D.C.’s Office of Revenue Analysis, reported last year that, in the District, $2 million was the new $1 million. In other words, being able to afford a million dollar house in D.C. wasn’t enough to set one apart anymore. In less than 15 years, million dollar house sales went from rare to mundane, yet the language of luxury has become more ubiquitous—and less meaningful—than ever before. Except that, even as the word itself has lost meaning, luxury has meant that established neighborhoods are being transformed into places where only a curated few can afford to live.

In the American imagination, luxury perhaps means a ten-bedroom mansion with a four car garage and a spacious yard. In America’s fastest-growing cities, however, luxury apartments and condos are on the rise. For good reason, at least from the point of view of the developers: demand has been surprisingly steady for $2,000/month studios.

Quartz reported on the luxury apartment boom earlier this year, finding that the greatest share of new luxury units was in America’s fastest growing cities. Places like Houston, Atlanta, Dallas, D.C., Boston, and New York. They defined “luxury” as apartments aimed at people who could afford to buy, but are choosing instead to rent. This has less to do with the actual definition of luxury and more to do with the reality that, as young people move to cities, developers increasingly cater to what they think urban millennials want, and perceive as luxurious: high-end amenities, fancy grocery stores, expensive coffee, microbrews. Peruse the promo sites of up-and-coming apartments and condos and read things like:

Host a rooftop movie party, entertain in the conservatory with unparalleled views of the city, or get fit in an old-school boxing gym.

...designed to maintain the character of the corridor while also providing luxury features expected.

These phrases describe three of the fourteen new developments planned for H Street, D.C. in the next two years. H Street is a neighborhood spanning 13 blocks North of the U.S. Capitol and East of Union Station, and one of the most emblematic of D.C.’s gentrification. The neighborhood was razed in the race riots of 1968, and over the next two decades was notorious for crime and an open-air drug market. Now, studio apartments starting at nearly $2,000 will sit atop a new Whole Foods built on the site of the historic Apollo Theatre. A shiny streetcar now services hip new restaurants like Maketto and Cusbah.

Developers, and those of us who move into their properties, are putting luxury where it wasn’t before, changing and expanding its meaning—and making sure that it is still, as it always has been, out of reach for the people (who are, in D.C. and elsewhere, overwhelmingly people of color) who were there in the first place.

It’s not just the rental market. Real estate in these fast-growing cities has rebounded from the housing crash in a big way. Population is growing faster than housing supply. Even projects not labeled “luxury” are prohibitively expensive. And still, more first-time homeowners who are committed to staying in the inner city are choosing to live in smaller spaces, buying smaller condos precisely because they are more affordable, but unsustainable if you want to start a family in the coming years.

Homes for families—especially working-class, African American families—are literally shrinking. In reporting on this phenomenon in the Brookland neighborhood in Northeast D.C., the Washington Post quoted a developer with saying that three- and four-bedroom apartments “are not consistent with the creation of a vibrant new community.” The developer did not say who comprised that vibrant new community. For families who have long been in D.C., luxury is now everywhere and out of reach all at once.

This is not to say that having nice new buildings cannot benefit a community, or that people who have long lived in neighborhoods can’t use improved schools or new supermarkets or benefit from safer streets. But if luxury is only for an imagined, wealthy millennial, and so ads for luxury apartments never mention schools because they aren’t meant for families, luxury, however we define it, will surround and suffocate families (and real, non-wealthy millennials) without letting them in. (For what it’s worth, the D.C. Office of Planning has recognized that the District is rapidly changing, and will host a series of unprecedented public meetings to solicit feedback on how to amend the 20-year framework that guides future growth and development in the city.)

Building more and ever-shrinking apartments and condos for the millennial of today fails to consider that tomorrow, or in five years, that millennial might be married, might want to stay in the urban core, send their children to local schools, and pay local taxes. But they can’t. Because there is no middle between the (non-luxury) million dollar townhome and the one-bedroom (luxury) apartment.

Experts are quick to caution that the luxury development boom is not necessarily a sign of a new housing bubble. But earlier this year, news outlets began predicting the demise of luxury condos in Manhattan and Miami, where demand for ultra-luxury units fell, perhaps in part due to stricter U.S. Treasury oversight of all-cash condo purchases. High vacancy rates in luxury complexes could be bad news. Hans Nordby of the real estate research firm CoStar told Fortune: “If there is a mild recession, and it doesn’t come with a capital crisis of biblical proportions, what will happen is that we’ll get some defaults among mortgages, and they’ll be concentrated among luxury building.”

Just this year, several outlets reported that millennials are actually starting to leave cities, in favor of more affordable first homes in the suburbs.

Perhaps after they’ve gone we can ask ourselves who the demand for so-called luxury ever served in the first place.