A Dictator Tries to Convince the World He's a Democrat 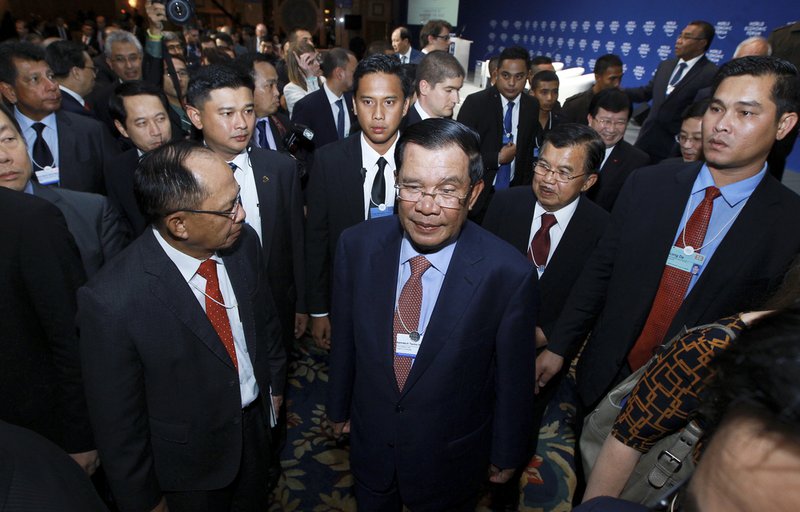 Cambodia’s ruling party declared victory following the July 29 national election. Headed by Prime Minister Hun Sen, who has ruled the country for more than three decades, the Cambodian People’s Party (CPP) announced that it will now hold all 125 seats in the country’s National Assembly.

That the CPP would win handily was a foregone conclusion. The ruling party’s only real competition, the Cambodia National Rescue Party (CNRP), had been dissolved last November, while its leader, Kem Sokha, was imprisoned on flimsily concocted “treason” charges. To top that off, in the months leading up to the vote, the government executed an unprecedented crackdown on independent media and civil society groups, severely restricting the space for free expression and competition.

Yet despite the absurdity of the election conditions and results—which speak to the country’s firm descent into one-party rule—the government has labored to promote the idea that democracy is alive and well in Cambodia. To do so, officials have leaned heavily on two factors in the recent polls: high voter turnout, and the presence of election observers. By relying on these metrics, the Cambodian government has revealed its own need for democratic legitimacy—a need that, in some ways, offers a glimmer of hope. Even so, on both fronts, the purported credentials are nothing more than a mirage.

Cambodia’s National Election Committee (NEC) reported that voter turnout stood at 82.2 percent on election day, considerably higher than the 68 percent of voters who showed up to the polls in the previous parliamentary elections in 2013. A campaign by the dissolved opposition to encourage people to abstain from voting appeared—on the surface—to have failed to garner significant public support.

But given the NEC’s lack of independence, there are legitimate questions to be asked about the validity of the reported figures. Furthermore, the turnout numbers—even if they are to be believed—reflect the results of intimidation and public fear, rather than voter enthusiasm or consent. Worried that low turnout could undermine the election’s legitimacy, CPP officials in the lead-up to the vote publicly labeled those planning not to cast ballots as “traitors” and threatened to withhold public services from non-voters. Even in the midst of this drastic coercion effort, the number of spoiled ballots—effectively protest votes—increased nearly six-fold from 2013, pointing to considerable public resentment.

The NEC was also keen to highlight the nearly 80,000 domestic and hundreds of international election observers present for voting day, which reportedly marked an uptick in registered monitors compared with 2013. The NEC’s Chairman said that the presence of international observers, in particular, “shows that the election is open, participation is comprehensive and that there is a lot of trust in the election.”

But Cambodia’s most respected, independent domestic election watchdogs declined to deploy observers, citing concerns about the political environment, as did credible international observer groups like the Carter Center, which said that, given the CNRP’s dissolution, it could not “consider deploying observers to an election process that is manifestly unfair.” Likewise, foreign governments from Europe and Japan, which had sent election monitors to Cambodia in the past, opted not to do so this year.

In their place came governments like China—a key backer of the CPP regime—which sent election observers to Cambodia for the first time. There were also monitors from groups like the International Conference of Asian Political Parties and Centrist Asia Pacific Democrats International—both of which have direct ties to the CPP. In the past, these so-called “zombie monitors” have issued glowing reports of deeply problematic elections around the world, and this time was no different. A hodgepodge of right-wing politicians from European countries also showed up to praise the vote. Among them was a politician from Moldova who openly said that he did not “believe in free elections.” While much of the world decried the death of democracy in Cambodia, these faux observers hailed the 2018 election as democracy’s “rebirth.”

Despite its dubious bona fides, the CPP had held up these “observers” and their positive reports as evidence that the election was free and fair, even inflating their credentials in certain instances to bolster that case. For instance, the CPP touted the collection of right-wing European politicians as “European Union observers”—presumably to the dismay of the actual EU, which declined to monitor and criticized the vote. In addition, several state lawmakers from Washington State who also traveled to Cambodia to observe—apparently unaware of the larger context behind the government’s invitation—were referred to as “U.S. Senators” by the Cambodian authorities. And at least one government-aligned news outlet even described foreign journalists reporting on the election as “observers”—seemingly an effort to juice the stats on foreign monitors.

With this troublesome election behind it, the CPP is again in firm control of Cambodia and empowered to continue on its path of increasingly repressive dictatorship, absent the limited space for opposition and free expression that existed previously. It’s also clear, however, that the Cambodian government is not yet ready to fully embrace a rhetorical defense of one-party rule. Hun Sen still needs to pay lip service to democracy, pointing to a surprising resilience of democratic norms—even amid setbacks globally—and, perhaps, a weakness in the CPP’s otherwise formidable position.

Much has been made of Cambodia’s shift toward China, a regional power that has emerged as a key foreign investor in the country and public backer of the Hun Sen regime. A fatalistic narrative has developed in some Western policy circles, underscored by a belief that actions by the international community—particularly democratic nations—would have no effect on Cambodian government decisions in the face of Chinese largesse.

But despite this clear shift, the Cambodian government’s obsession with bolstering the legitimacy of the 2018 election demonstrates that it may actually be more sensitive to the wider international community’s perceptions. At the same time, the Cambodian public has come to expect democratic processes, the emergence of which coincided with the end of the country’s brutal civil war, and the government recognizes that it will require more than repression to keep those expectations at bay.

Hun Sen wants it both ways: He wants to claim a democratic mantle but doesn’t want to deal with the pesky competition that comes with a genuine election. He is hoping that inflated turnout numbers and thumbs up from fake observers will be sufficient substitutes for genuine democratic processes. The question now is if a skeptical domestic public and international community will buy his game.