Can Ranked Voting Save the Electoral Process? 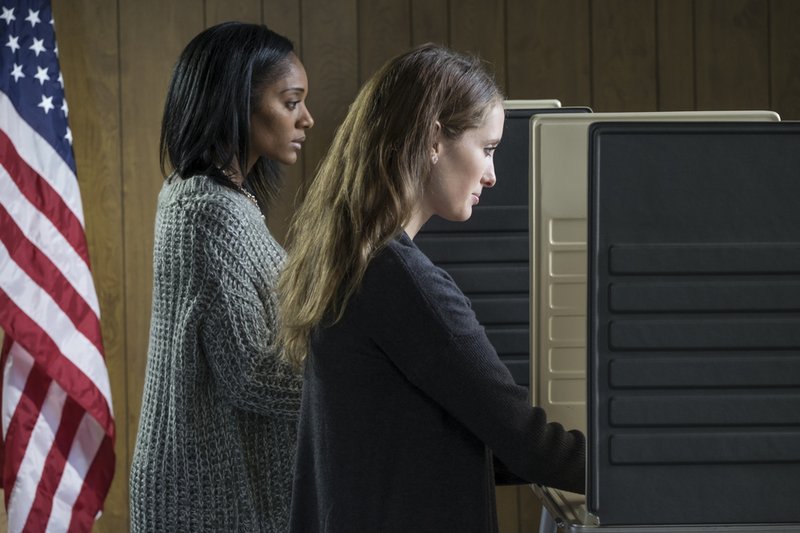 Katy Perry’s new Rock the Vote video offers a great strategy for encouraging engagement in democracy—prurient interest. She tries to vote naked, and ends up being arrested and taken away. But a strong message is left: You can vote wearing whatever you want—“Just wear clothes.”

Perry’s home state, California, is full of celebrity calls to get to the polls, clothed and unclothed. But such stunts obscure the essential problem with voting in the United States—too often our electoral rules actually discourage participation in elections.

I know something both about publicity, and about getting people to vote. I’m a musician who has also worked for years to improve our elections, serving as chair of FairVote, a nonprofit pushing for election reform to make democracy fairer, more functional, and representative.

Fundamentally, people are drawn to vote for many reasons—they want a choice, they want to vote for a party and a person who shares their values, and they like to participate in races that are close and important. But our state laws undermine each of these ways of luring people to the polls.

Take California’s top-two primary system, which is similar to what we use in my home state of Washington. With this system, voters, through a ballot measure, got rid of exclusive state-sponsored partisan primaries in favor of more choices on a primary ballot. More choice is a good idea, but top-two comes with a big problem: It restricts choices in the November election—when most people are paying attention.

In California, all state and congressional candidates run in the June primary, the top-two vote getters then advance to the November runoff regardless of party. This means there are only two candidates campaigning for any given office over the summer and fall. Sometimes, as in the state’s current U.S. Senate race, those two candidates are of the same party. This leaves other parties—and ideas—out of the contest, while no write-in votes are permitted.

California also suppresses political association. Party candidates are not actually nominees of a party. They can self-identify with a party—on the ballot itself—and the party can do nothing about it. This is the result of a 2008 U.S. Supreme Court ruling in which the Chief Justice John Roberts somehow compared political association to preferring a favorite can of soup. I would try to explain Roberts’ reasoning, but can’t in the course of this article.

However, I will opine that political parties, in democratic systems, are supposed to be the voices for groups of people. Parties cultivate profiles that frame issues so busy voters can better understand candidate positions. A nominee should be the ambassador to voters regarding the needs as values of the party. But California protects a candidate that is no such ambassador; a candidate, by way of the fine print on the ballot, merely prefers a party.

California is restricting association, one of our First Amendment freedoms. And it’s not just in state elections. The association problem is also local.

Like state elections, local ballots in California are also nonpartisan. But instead of candidates preferring parties as if they were their favorite brand of canned soup, on local ballots there are no party labels at all—we don’t know the soup or the soup brands.

The research on this lack of labeling is comprehensive and conclusive. Without a cue on the ballot about party affiliation, many voters don’t have enough information to make a choice that fits their preferences. And without parties in local races, there are fewer institutions and grassroots activities to pull people in.

It doesn’t have to be this way. It’s time to adopt voting systems that offer more choices and closer contests to get people involved and to the polls.

Indeed, some cities in the Bay Area have adopted one such system, known as Ranked Choice Voting. Instead of just choosing one person to support, voters get more choice by ranking a ballot with their first choice of candidates, second choice and so on. Those rankings allow an “instant runoff” that virtually folds the primary and general into one election.

Researchers such as the University of Iowa’s Caroline Tolbert, Western Washington University’s Todd Donovan and the University of Missouri-St. Louis’ David Kimball have shown how ranked choice voting is having a positive impact. Voters in ranked choice systems understand and like the system, report more direct engagement with candidates, are more likely to vote in the general election, and are electing more women and people of color.

Ranked choice voting has a long track record in other parts of the world as well, including national elections in Australia and Ireland and mayoral elections in cities like London and Wellington, New Zealand. This month, Maine voters are considering a ballot measure that would establish ranked choice voting for 2018 elections there for governor, U.S. Senate, U.S. House, and state legislature.

The California legislature this year passed SB 1288. Led by the seven legislators who represent cities with ranked choice voting, this bill would have given more small cities in California the options of using it. Gov. Jerry Brown vetoed the bill, but those of us who support the idea won’t give up trying to convince him, and other California leaders, it’s time for a change.

We ultimately need a broader conversation about fair representation in California, and the nation. In California cities today, for example, candidates in many elections run at-large with winner-take-all rules. This means the whole city votes for all council members or school board members; this means that the majority can elect everyone. That method has led to under-representation of racial minorities in local governments.

Ranked Choice Voting’s proven record of producing more diversity in government (a study of Bay Area cities found they elected more women and minorities than their neighbors) can help address this problem—especially when it’s used in these at-large elections. In an election for five school board members using ranked choice, a 51 percent majority of votes would not be able to elect all five seats; the majority could elect only three seats. Like-minded groupings of voters making up about one-fifth of the vote could elect someone to represent them, and ranked choice ballots would proportionally reward inclusive behavior that attracts second and third choice support.

Californians, often leaders, should feel proud their cities were early adopters of ranked choice voting. It’s time for more of California’s 125 charter cities to adopt it, as they can under state law, and explore options for how it can improve state and federal elections. And a win for ranked choice voting in Maine will bring statewide reform into focus elsewhere.

It’s great Katy Perry is encouraging civic participation. She may be tempting people to peek at the nude form, however, let’s look at restrictive election rules as the emperor not wearing any clothes.