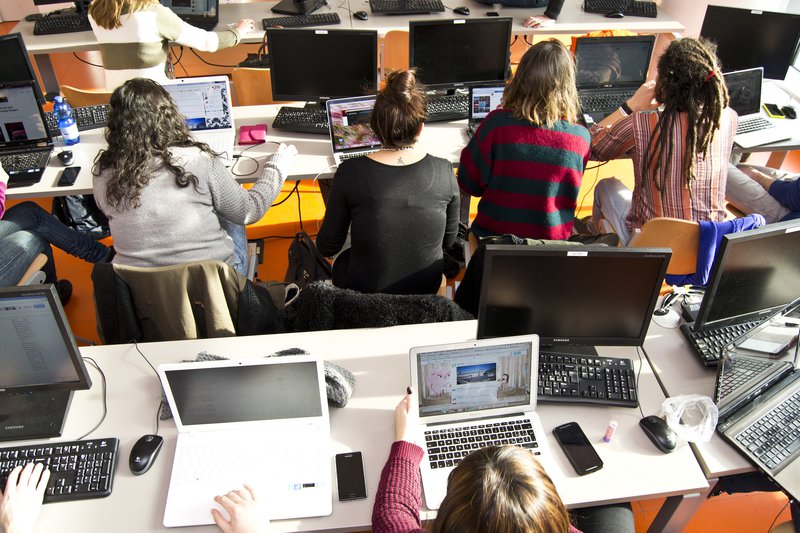 As students across the country head back to school this week, you might imagine their school leaders consumed by last-minute hiring decisions, meetings with principals and other school leaders, and ongoing management of the district’s finances and facilities. But for Pam Moran, superintendent of Albemarle County Public Schools in Virginia, there’s another topic weighing on her mind: the district’s broadband infrastructure—or the network of equipment and technologies needed to provide high-speed internet service to Albemarle’s classrooms. Over the past decade since she began leading Albemarle’s schools, she’s been at the helm of the digital transformation reshaping the district.

If you haven’t been in a public school for a while, it may be hard to fully grasp how much has changed in a relatively short period of time. New technologies in the workplace are so ubiquitous that we barely notice them, but it’s taken longer for these tools to take hold in classrooms. In the past few years, however, schools have rapidly begun catching up. The work that Moran and her team have done to turn Albemarle’s rural schools into hubs of digital innovation has repeatedly drawn national attention. And at the center of its transformation has been the district’s focus on closing the digital divide for its students, both in schools and also wherever learning is taking place. Moran has found over the course of her tenure that there’s not just one solution for addressing inequitable access to high-speed internet service; the district has relied on a number of different tools, including multiple funding streams, an assortment of public resources, and a consistent leadership and vision.

Unfortunately, however, other districts around the country have found it much more difficult, if not impossible, to follow suit. Indeed, exploring the tools Albemarle has assembled, one thing is clear: Not all districts have been equipped with the same toolbox to close the digital divide for their students.

Albemarle’s 13,600 students and their families are spread out over 726 square miles—more than half the size of Rhode Island, with buses traveling between 14,000 and 15,000 miles a day to bring students to and from school. To connect all of its 27 schools, as well as to extend service into the community, this has meant building out district-owned broadband infrastructure.

To construct this network, the most important tool the district has needed is public financing. Moran and her team have sought out funds from multiple sources available to Virginia’s districts. The first is the federal E-rate program, which subsidizes the cost of broadband for schools that serve a large percentage of low-income students. The district also receives support through Virginia’s Technology Initiative, which provides funding for districts to build out broadband infrastructure, connect to high-speed internet service, and ensure schools have at least one device for every five students. Additionally, Albemarle has turned to local government funding through the county’s Capital Improvement Program. Braiding together these funds, the division has slowly been able to construct its own fiber network; Moran told me that in the next two to three years, this network should connect all of the division’s schools.

As the district has continued with its push for digital learning, Albemarle has also been working to build out connectivity to student’s homes. To tackle this divide (one that many in the education field refer to as “the Homework Gap”), some districts have turned to one additional funding opportunity: the federal Lifeline program, which subsidizes the cost of home broadband service for low-income families. But while invaluable in more densely populated areas, the Lifeline program has proven less helpful for many rural students. According to Moran, only a small percentage of Albemarle’s students receive subsidies through Lifeline, as there’s no commercial service available in more than two-thirds of the county. (In order to take advantage of the Lifeline program, households first need access to a commercial provider.) “Population density is so low, we’ll never see commercial carriers try to monetize those areas [by building out service],” she said to me. “In many parts of the county, the school division’s network is the only broadband service present.”

Due to this limited commercial service, the district began to consider how it might leverage additional public resources to build out its network to connect students at home. As an article in Wired recently described, Albemarle has been able to take advantage of the Educational Broadband Network (EBS), a piece of spectrum—the radio frequencies that allow wireless communication signals to carry over the airwaves—which were set aside many years ago by the federal government for educational use. The district has built out its network to existing towers, and negotiated contracts to broadcast wireless signals to students’ homes using this public spectrum. Moran and her team are continuing to explore additional local partnerships that would allow them to further expand broadband service for students and the community. “Either we do it, or it won’t happen,” she said.

In addition to financing and public resources like the EBS, Albemarle has also benefitted from strong, consistent leadership. Moran has been superintendent of Albemarle Schools for more than a decade, providing a clear vision and consistent support for addressing inequitable connectivity in schools and throughout the community. With consistent leadership, the district has also been well-positioned to connect and maintain critical relationships with other local and regional leaders to partner on infrastructure—including local government, public housing authorities, emergency services, the local business community, and others.

Again, however, the tools that supported Albemarle’s work, are not always accessible to other districts. First, many districts don’t have access to the same range of funding opportunities as Albemarle—while Virginia sets aside dedicated infrastructure funding at the state levels, only about half of other states do. Further, more than 20 states have laws on the books that either restrict or prohibit building out community broadband networks like Albemarle’s. These laws, advocated for by commercial carriers, were ostensibly put in place to keep local government from competing with the private sector; for students and families not served by commercial carriers, however, these laws tie the hands of public institutions that could help them. Finally, while Albemarle has seen the benefits of consistent district leadership, across the country the average tenure of school superintendents is only three to four years.

The tools, then, exist to help districts to bridge the digital divide for their students. The problem is that many districts don’t have access to these tools. Places like Albemarle Schools provide a clear example of how school districts can close the digital divide; now we need to address the barriers that keep other districts from following suit.