Black Death Is the White Noise of America 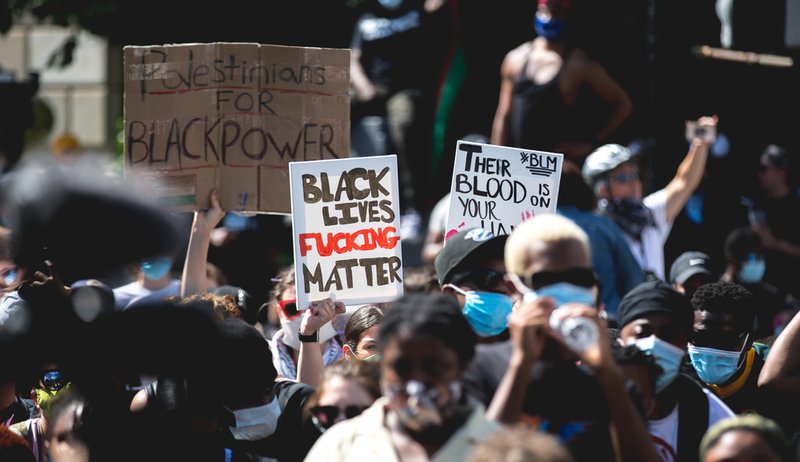 At this point, we know their names. George Floyd—whose murder has sparked global anti-racism protests—suffocated to death after a white police officer knelt on his neck for nearly nine minutes. Breonna Taylor was shot at least eight times in her own home by police officers executing a search warrant. Ahmaud Arbery was pursued and shot to death by two white men while he was out on a jog. Christian Cooper is alive today—but if Amy Cooper had gotten her way, he might have become yet another person killed by police solely for the crime of being Black.

These names are just the tip of the iceberg—the ones that, through sheer chance, managed to gain traction on social media. According to research and advocacy group Mapping Police Violence, at least 7,663 people were killed by police between 2013 and 2019. Black people are approximately three times more likely to be victims of police killings than white people, despite being 1.3 times more likely to be unarmed. Beyond police violence, the Black community is disportionately affected by disease, poverty, unemployment, displacement, hate crimes, and more.

So while some are celebrating the arrests of the four officers involved in Floyd’s death, I refuse to do so. Black people are routinely murdered without any consequences for their killers—the officer who gunned down Tony McDade, a Black trans man, has yet to even be publicly named—and we deserve better than to be grateful for the occasional scraps of “justice” that come our way (often months or years later). We deserve better than to be hunted, killed, and treated like animals. We deserve better than a hashtag or two from self-professed allies, who get to pat themselves on the back for raising awareness and then walk away. Some of us don’t get to walk away. I don’t get to walk away.

Right now, in the midst of a global pandemic, many Americans are coming to terms, for the first time, with their fear of leaving their homes. But for the Black community and other people of color, that fear is a constant fact of life. As a Black man, I wake up in the morning and pray I’ll be able to go out for a walk, take public transportation to work, get groceries, and do what everyday people do without being targeted or killed. I hope you never have to know that feeling, that you aren’t constantly looking over your shoulder for white supremacists—including the ones who wear a blue uniform and a badge. To go for a run is to die. To go to a store is to die. To go outside is to die. To be Black is to die.

And all the while, white people go about their day, seemingly oblivious. Black death is the white noise of America—and it's exhausting. We are the ones forced to continuously defend our humanity to the rest of the nation, to make ourselves less threatening to people who can’t police their own racist imagination. I’m tired of repeatedly crying out, “I can’t breathe”; of contributing to a country that systematically excludes Black people from every aspect of prosperity (and, as in the Tulsa race massacre, slaughters us when we manage to attain it); of not being able to be like my white friends and walk down the streets of a neighborhood without fear of being shot. I’m tired of living in a nation that loudly trumpets its respect for human dignity and freedom—while treating Blackness as an unforgivable sin.

Until this moment, I was always reluctant to express this anger and fear—I could never seem to find the right words. Now, I realize there are no right words. Nothing can adequately describe how terrified, disgusted, and disappointed I am in a country that forces my people to fight for the right to stay alive. For so long, we’ve protested peacefully, centering white people’s comfort in conversations about race, kneeling silently in a field in the hopes that that might be enough—but no more. Now, by whatever means necessary, we’re forcing this country to look into its own depraved soul—and you can either stand with us or be complicit in our murder.

In the past few weeks, hundreds of thousands have taken to the streets to protest U.S. police brutality and systemic racism. More than 11,000 protesters have been arrested; many have been injured or killed as a result of police violence. It’s time for everyone who believes in racial justice to support their efforts and the Black community—if you have the means, I’m asking you to donate to or get involved with these resources: