Is Betsy DeVos a Mainstream Candidate for Secretary of Education? 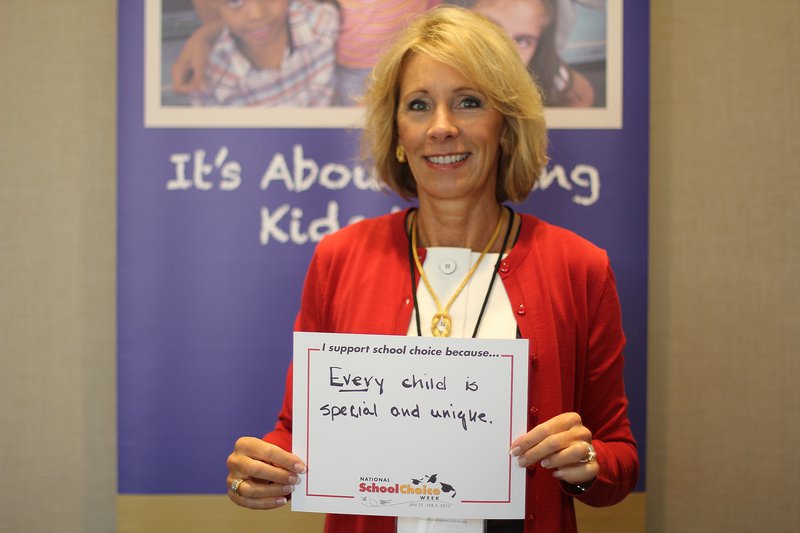 Tuesday night, Betsy DeVos sat before the Senate Health, Education, Labor and Pensions Committee for her first (and likely only) hearing before next week’s vote on her confirmation as the next Secretary of Education. While it seems inevitable that DeVos will be confirmed, it remains the responsibility of the Senate, education policy experts, and the public to vet her qualifications and determine if she is prepared to lead the country on education issues.

During her hearing yesterday, and elsewhere over the past several weeks, Sen. Lamar Alexander (R-TN) and other commenters have called DeVos a “mainstream” pick for Secretary of Education—but very little about DeVos is normal or conventional. The qualities that put her so far outside of the mainstream are not unique benefits, but a clear indication that she lacks the qualifications and understanding necessary to assume this important role. Her lack of exposure to the traditional public schools that the majority of American children attend merits scrutiny, but is not necessarily disqualifying. Similarly, DeVos’ enormous wealth puts her out of touch with the lives and experiences of the nearly two-thirds of Americans who don’t even have $1,000 in savings, but her billions don’t preclude her from service in public office. Rather, it’s her stunning lack of expertise and experience that should give us all pause.

Secretary of Education isn’t a position many people have held—DeVos will only be the eleventh person to assume that title. Nonetheless, a review of the distinguished men and women who have led the Department of Education shows a clear, conventional pathway to the position: A demonstrated background in public service with specific experience in either leading a school district, state board of education, or university system. While there is certainly no clear consensus on the qualifications for a position such as this, it’s unarguable that public officials have public track records that provide significant insight into their ideas, attitudes, and activities—and leaders in education are no different.

Conversely, in introducing DeVos, former Senator Joseph Lieberman said, “I know that some people are questioning her qualifications to be Secretary of Education, and too many of those questions to me seem to be based on the fact that she doesn’t come from within the education establishment.” If by that statement, Senator Lieberman meant that DeVos has never worked in the public sector, and that she lacks any experience leading any public institution, he is correct. (She has also never held any elected office.) Instead, DeVos’ experience in education has been characterized as “advocacy,” though that more accurately describes the work funded through her many charitable organizations than her own efforts. Her work in education has existed primarily behind the scenes: as a fundraiser, organizer, and deep-pocketed donor.

The hearing highlighted a range of pertinent PreK-12 issues that fall under the purview of Secretary of Education: education spending, childcare and early learning, measuring the academic progress of students, guidelines for educating students with disabilities, accountability for online learning providers, equal rights protections for LGBT students, the collection of school discipline data by the Office of Civil Rights, and more. On the higher education front, senators spotlighted issues regarding financing postsecondary education, simplifying financial aid applications, continuing to confront campus sexual assault, and the regulation of the for-profit higher education industry.

Normally, it would be possible to look at a candidate’s resume, and see what choices that candidate made when faced with the real decisions of running actual institutions, casting a vote on specific policies, or (in the instance of our first Education Secretary) writing clear opinions for legal cases. A conventional candidate may not have taken a public stance on every one of these issues, but would have made public statements about a broad range of them. Further, they would necessarily have gained significant background knowledge and deep expertise in education policy and practice that they could draw upon to offer greater insight into their thinking and decision making.

Instead, when DeVos commented on areas where she does have a record—where, according to Senator Alexander, she has “used her considerable wealth and effectiveness to advance [her] ideas”—she used her behind-the-scenes role to distance herself from the ideas, activities, and attitudes of organizations and individuals that she has funded, chaired, directed, and otherwise been affiliated with (not to mention those in which she has had a financial stake). She was not forthcoming about the real challenges of the mostly for-profit charter schools in Detroit that she championed. She flatly denied any ties to the views espoused by organizations that she has been connected to that endorse the abusive practice of conversion therapy for LGBT youth. She distanced herself from the Common Core State Standards, also supported by organizations with which she is affiliated. She dodged any account of the failures of for-profit education providers like K-12 Inc. Her record isn’t just paper thin, it also appears to be written in invisible ink.

With no clear public record, and few signals from the president-elect about his education agenda, it’s troubling that DeVos did not seem to possess a basic understanding of key education policies, including the responsibilities of the federal government under the Individuals with Disabilities Act (IDEA), the difference between student proficiency and student growth measures, and even simple facts and figures like the percent increase in student debt from 2008 to 2016. Even her rhetoric around “choice” rang hollow. As Senator Lamar Alexander described, her support for public charter schools and greater choice for lower income parents could arguably be considered mainstream—as talking points. But beneath those talking points, complicated policy questions remained unaddressed around the considerable challenges of providing real choices to parents at scale: the differences between nonprofit vs. for-profit charter schools; the impact and quality of funding portability, or voucher programs; the troubling outcomes of many virtual schools and distance learning providers; the consequences of choice, including increased school segregation; and more. A normal candidate—a mainstream candidate—would have more than talking points: They would have a record.

For the millions of working Americans that have gained the experience and credentials necessary to do their jobs effectively, elevating unqualified individuals to important leadership positions undermines the legitimacy of our public institutions and further weakens our core beliefs in education, hard work, and merit-based achievement. In this case, it’s even more ironic, given that DeVos will be tasked with leading the country’s education system.

As we move forward into the next four years—where so much that seems completely aberrant is becoming increasingly normalized—it’s worth reflecting on how we characterize the ideas, attitudes, and activities of our public officials, especially highly visible ones like DeVos. Senator Joseph Lieberman characterized DeVos as an outsider, despite her 30 years as the ultimate Republican insider. But she certainly is an outsider when it comes to any qualifying experience in education leadership.