Why Are We Afraid of Defunding the Police? 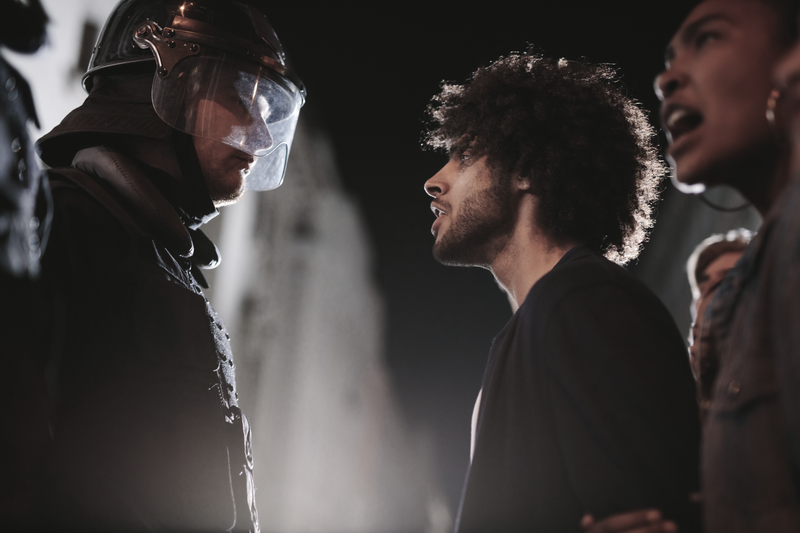 “How could society function without police?” It’s nearly impossible to imagine an America that doesn’t heavily rely on armed law enforcement, even for those calling to “defund the police” and the growing number of Americans who recognize how policing contributes to structural racism. Cops are asked to mediate conflicts, manage traffic, patrol neighborhoods, mentor youth, and so much more. They’re responsible for responding to everything from low-level crimes to violent emergencies. But advocates of defunding the police are not calling for the lawless, police-free world that critics fear. Instead, confronting our fear of defunding the police means shifting responsibilities that the police should never have had in the first place to a new class of unarmed public safety officers.

In 2020, “defund the police” became a rallying cry and policy platform for Americans fed up with ongoing brutality and murders by police officers that disproportionately affects Black and Brown Americans. Over a year and a half after the murder of George Floyd, the apologies and promises from politicians to reform policing, highlighted by their inability to reach a deal on a police reform bill, have become tools to divert momentum behind the call to defund the police.

Policing in America has never been a neutral institution. The police evolved from patrols whose chief responsibility was catching people attempting to escape slavery. And although the United States abolished slavery, we never abolished the legacy institution that enforced it. Since then, police budgets have soared — most cities now spend between 25–40 percent of their budgets on law enforcement. These tax dollars fund an institution that fuels mass incarceration, fails to prevent crime at the source, and demonstrates a callous disregard for the lives of people of color.

The $100 billion that the United States devotes to police each year is a price many Americans are unwilling to continue to pay. But due to the disparate roles police have to fulfill, removing the police industrial complex from American society without a viable replacement would risk jeopardizing community safety.

Since 2010, San Francisco has deployed over 200 ambassadors who have completed violence prevention training and hail from the communities they serve. According to Adrienne Pon, executive director of the Office of Civic Engagement and Immigrant Affairs for the city, these ambassadors have logged over 786,800 unique interactions with members of the public requesting assistance. These programs serve the community while also being able to serve the community ambassadors — about 20 percent have been individuals experiencing homelessness and about 25 percent of participants have been able to successfully transition to permanent employment.

There are a number of potential benefits of these programs: chiefly, replacing armed police with unarmed ambassadors may increase the safety of entire communities, including both civilians and public safety officers themselves. Removing guns from routine public safety interactions with civilians can prevent unnecessary escalation that occurs in the presence of firearms.

Training that focuses on de-escalation and mental health crisis management could allow ambassadors to avoid the mental gymnastics currently expected of police officers, who are trained to make difficult judgement calls, based on imperfect information, about whether to escalate or de-escalate emergency situations. The broad, complex array of police responsibilities leads to the unnecessary deaths of those with mental illnesses and unarmed Black men when officers mistake their tasers for firearms.

Pon explained that San Francisco’s Community Ambassadors Program was established in response to language and race tensions. “Armed with nothing but information and narcan,” she explained, ambassadors engage both residents who need assistance and those who may be misbehaving or causing others harm.

Individuals who distrust police may be more likely to call ambassadors to respond to emergencies when they might otherwise not call 9-1-1. “City residents are often fearful of the government, and the ambassadors are there to gain the community’s trust because they are from the community,” Pon said.

The United States abolished slavery, we never abolished the legacy institution that enforced it.

Despite showing promise, community ambassador programs are not a panacea to ending systemic racism. Unarmed law enforcement could continue racist practices like stop-and-frisk and traffic stops based on racial profiling. States with open carry laws will have to determine whether to prevent ambassadors from arming themselves voluntarily, which may raise Second Amendment challenges. Communities will have to develop political institutions and oversight mechanisms to ensure that ambassadors reflect and are held accountable to the communities they serve. Academics and law enforcement experts will have to create a training curriculum that emphasizes de-escalation while creating protocols that protect ambassadors in a country with an estimated 393 million firearms. Jurisdictions will have to iron out the relationship between ambassadors and armed law enforcement officers who will be necessary to respond to lethal violence and other potential mass casualty events.

Policymakers should monitor the long-term effects that ambassador programs have on neighborhood community relations as they begin to generate a base of evidence. If ambassadors demonstrate the ability to improve public safety and trust in authorities, officials across the country should begin to replace armed police in response to the 99 percent of police calls that do not involve violent crime. Indeed, the concept is nothing new — unbundling responsibilities from the police has made communities safer in the past. For instance, police once acted as de facto paramedics who refused to assist Black patients, until innovators in Pittsburgh created a field we deem indispensable today: paramedicine. But first we must understand that for far too long, police reform has focused on reducing the harms of policing rather than rethinking the overall role of police in our society.

Ambassador programs have begun to demonstrate that communities don’t need to rely on police to preserve the peace, and offer people in this nation relief from their fear of interacting with armed law enforcement and potentially becoming the next victim of police brutality. It is not enough to simply say the names and paint murals of those murdered by police. Let’s honor their memories by taking bold strides towards enacting the policies that will shape a more just and compassionate future of public safety.

With Congress Passing on Police Surveillance Bills, Cities and States Take up the Fight (New America Weekly, 2020): Tech companies and law enforcement have been forced to reckon with their misuse of racialized facial recognition technology. But Congress has yet to introduce any meaningful legislation, leaving local governments to try to reign them in.

Calls to 'Defund the Police' Could Transform Public Budgeting as We Know It (New America Weekly, 2020): Calls to “defund the police” have ignited conversations surrounding how and why we should reallocate funds from America’s over-invested policing institutions, with participatory budgeting being among one of the most promising solutions proposed.

Texas' Governor Has Condemned the Death of George Floyd, But He’s Been Silent on the State's Recent History of Police Killings (New America Weekly, 2020): Despite his previous condemnation of “horrific act[s] of police brutality,” Texas Gov. Greg Abbott has remained notably silent on other instances of racially-driven police violence in his own state, and has failed to adequately address police-reform efforts.