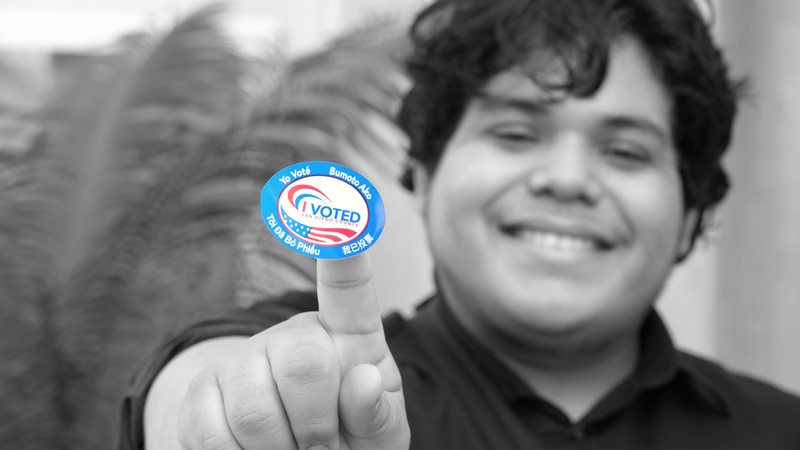 For years, Latine Americans have been largely ignored and left out of the conversation politically. After the 2020 presidential election, Latino voters were thrust into the spotlight. But the conversation excluded much of the history and context around Latino voters and individuals in a country centered around the Black-white paradigm.

In this extended Q&A from The Fifth Draft — the National Fellows Program newsletter — New America National Fellow Jennifer Medina discusses her upcoming book project, which examines the formation of modern Latino politics and identity in America.

Sign up for The Fifth Draft to hear how the world's best storytellers find ideas that change the world.

As a national political reporter for the New York Times, you write about Latino politics and identity often. What inspired you to expand your work into a book-length project?

I’ve spent two decades as a newspaper reporter and have long dreamed of writing a book, but had never settled on a topic that I was willing to commit the time and energy that a book project would require. After the 2020 presidential election, there was a collective shock in much of mainstream media and politics about Latinos, primarily over the movement toward Trump and the Republican Party. After feeling frustrated for years that Latinos are largely ignored, in some ways it was validating to see Latino voters in the spotlight. But there was so much history and context being glossed over and misunderstood. So I decided to use that frustration to fuel my work even further. We tend to think of race in this country solely through the Black-white paradigm. And yet, Latinos have long been racialized here and now make up nearly 20 percent of the country and are increasingly important in political battlegrounds. I am eager to explore the many implications in that reality.

While the Latino voting bloc has been a topic of major discussion among politicians over the past several decades, your Fellows project indicates that assumptions about that bloc are flawed. What factors need to be considered when thinking about Latino voters, other than their ethnicity?

So much of what has been in the national discourse has been based on flawed assumptions: that Latinos care primarily about immigration, that demographics are destiny, and that as the number of Latino voters grows, they will surely favor Democrats. On a very basic level, Latino voters are like any other voter: They have a whole host of issues they care about, including the economy, education, civil rights, climate change — the list goes on and on. They are shaped by religious views, their own socioeconomic class, their understanding of U.S. history, and their families’ migration stories. It’s crucial that politicians understand and speak to their aspirations — so many Latino voters I speak to deeply believe in the American dream and want leaders who show them that it is within their grasp.

“Republicans seem to hate people like me, but I don’t see how Democrats have made my life any better.”

Your work makes clear that the Latino vote is not the monolith it is often portrayed to be. What strategies have you developed as a writer and reporter to ensure that diversity is reflected in your work?

I try to spend as much time as possible speaking with voters on their turf — in their parks, schools, churches, and homes, wherever they live. I speak to elected officials, pollsters, activists and strategists, but that has its limits. And while I live in California where Latinos have long been a powerful political force, I am acutely aware that what I see here isn’t necessarily representative of other parts of the country. So I spend a lot of time on the road and making sure that I’m getting as wide of a perspective as possible. I am constantly trying to test and retest my assumptions, sometimes by asking political operatives what they think I am missing, but more often by making sure I am having in-depth conversations with voters to unpack the sentiments showing up in polls and election results. I am constantly amazed by how surprised voters are to hear that I want to understand their point of view, and how even those who say they distrust mainstream media will open up about their most closely held views.

As you’ve covered multiple election cycles across the country, what changes have you noticed in the beliefs and actions of Latino voters?

The biggest change has not been the beliefs and actions of voters themselves, but the way in which they’ve received so much attention from both parties, along with the media. There’s a pernicious and well-worn stereotype that Latino voters are a “sleeping giant” — but they haven’t been sleeping, they were simply being taken for granted. Latinos are a very young population, so the number of Latino voters is constantly growing. Part of what we’re seeing now is that Latinos want to be spoken to in a positive way — I’ve talked to so many Latino voters who say something along the lines of: “Republicans seem to hate people like me, but I don’t see how Democrats have made my life any better.” The conventional wisdom was Trump would repel Latino voters, but what we see is that was not enough.

You were introduced to political community organizing at a young age. How has this shaped your understanding of the political process and your reporting and writing?

I was a young teenager when California voters passed Proposition 187, an anti-immigrant ballot measure. My high school was overwhelmingly Latino and many of my classmates lived with silent fear that they or their families could be deported at any moment — this was long before anyone was calling themselves “undocumented and unafraid.” It made me deeply aware that politics is not some kind of abstract thing that happens in a far away capitol and rhetoric has real-world consequences. My goal as a reporter has always been to show how politics and policy impacts people’s everyday lives. I am less interested in the palace intrigue of politics and more concerned about how who we elect changes — or doesn’t — the trajectory of our country.

Going Beyond the 2022 Midterms — What We’re Watching (The Thread, 2022): New America’s Political Reform team takes a look at some of the bigger & broader trends that we should focus on during this election season.

Undecided Voters: Who They Are, What They Want, and How They Decide Our Politics (Political Reform, 2022): This report provides a description of the demographics and policy views of undecided voters, a group of voters that is often pivotal in deciding an election.