The White Man with a Pen 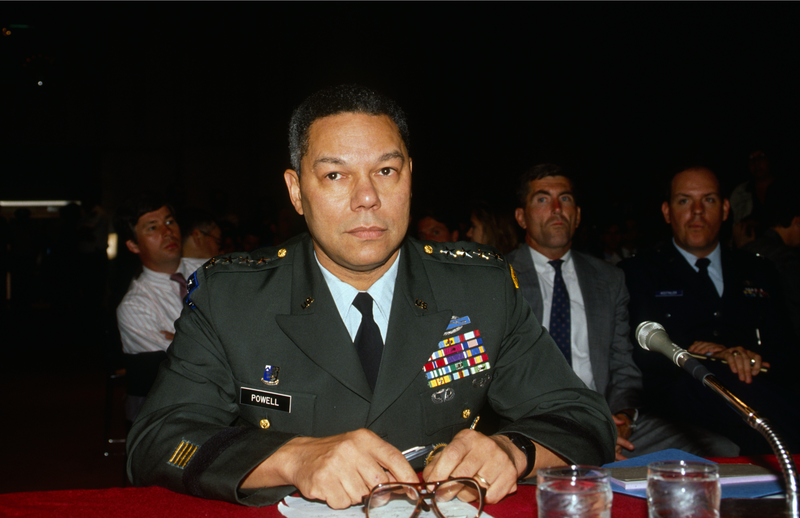 Colin Powell feared that his obituary would read: “Colin Powell sold Americans on going to war in Iraq based on intelligence that turned out to be bogus.” And what he feared came true immediately after the former secretary of state, chairman of the Joint Chiefs of Staff, and national security advisor passed away in October. The New York Times obituary, written by Eric Schmitt, a white man, led with this. Bradley Graham, a white man, followed suit in the Washington Post. And Spencer Ackerman, another white man, didn’t hold back either, titling his remembrance “The Only Man Who Could Have Stopped the Iraq War is Dead.”

Colin Powell was afraid, precisely because he also knew he (and, sadly, it is almost always “he”) who holds the pen controls perspective. And in the case of foreign policy and national security reporting, that perspective is all too white and male.

White men are what continue to make up the foreign policy establishment, and continue to dominate discussions and decisions. Indeed, they have made room for “diversity,” so that the surface appears more inclusive. But as Colin Powell’s obituaries show, they have failed to recognize, understand, and, much less, internalize their white male privilege that continues to skew power and perspective in their favor — and ignore the challenges, the slights, the microaggressions, and outright racism and sexism that everyone else faces.

The foreign policy landscape and the journalism surrounding it mirror the same issue of perspective. Colin Powell was the son of working-class Jamaican immigrants who settled in the South Bronx. He worked his way through the U.S. Army through ROTC, served two tours in Vietnam, then won a prestigious White House Fellowship. It paved his path to be the first Black national security advisor, chairman of the Joint Chiefs of Staff, and the first Black man to be secretary of state. There was even talk about him becoming POTUS. None of this came to him the way it all too often comes to white men — with back-slapping ease. But Powell not only worked hard — he also endured racism and microaggressions from those he worked with and those who reported on him: “I have swallowed hard under racial provocations, determined to succeed by surpassing,” he noted.

In the case of foreign policy and national security reporting, that perspective is all too white and male.

In remembering Colin Powell, we’re forced to read what the white man says about a man who meant so much to Black military officers, as well as to Black individuals looking to work in the foreign policy and national security space.

Powell walked past the slights and the provocations and got on with what needed to be done, because with the lack of representation in U.S. foreign policy and national security, he knew that if he got out, no one would blink, and worse, nothing would change. But this part of his legacy is washed out by the white reporting of his death. Powell sacrificed — because that is what anyone outside of the white male establishment is forced to do — and even in death, he still must sacrifice.

Did Powell make a speech before the UN Security Council that paved the way for the U.S. invasion of Iraq? Yes. Should that be a part of his legacy? Absolutely. But so too should his regret, his 13 rules of leadership, and his enduring significance to so many Black Americans.

In recent obituaries, Powell’s legacy has been limited to a moment where he was fed false information, and despite pushing back at and questioning both CIA and State Department intelligence, he soldiered on, as he believed he should. And to deride him for not resigning and for lack of leadership is nothing but an example of white privilege and hypocrisy. George Packer, Ezra Klein, and Tom Friedman are a few of the journalists who advocated for the U.S. invasion. Yet, each has managed to land lucrative book deals, columns, and fellowships without a second thought, while remaining go-to pundits. Their careers aren’t boiled down to a single moment or incident. But of course not, they are white men who hold the pen.

Diversifying and changing up the foreign policy and national security landscape is simply not enough — it requires changing the narrative. It requires allowing someone other than white men to hold the pen. While there are a number of white men who had different takes on Powell, his legacy was laid on the page by people of color, like Condoleezza Rice and Eugene Robinson. And it's promising, but it's not enough.

James Baldwin once noted, "what you say about anybody reveals you." Many of this week's obituaries reveal the failure to see anything amid the blinding blare of white male supremacy.

The Meaning of Security: Can a Divided Society Provide for the Common Defense? (Political Reform, 2021): Since the pandemic, Americans’ perceptions of national security threats have shifted. We consider the nuanced perceptions surrounding national security, and the long-term implications they will have on future U.S. security policy, including what frameworks we can put in place in order to address these challenges.

Four Data Trends in Gender, Diversity, and Security That You Should Know About (Political Reform, 2020): From leadership to planning, gender and gender relations play a major role in shaping key security trends. Through deciphering some of these trends within policy and government, one thing is clear: a lack of gender and other diversity has a detrimental effect on who gets a seat at the table.