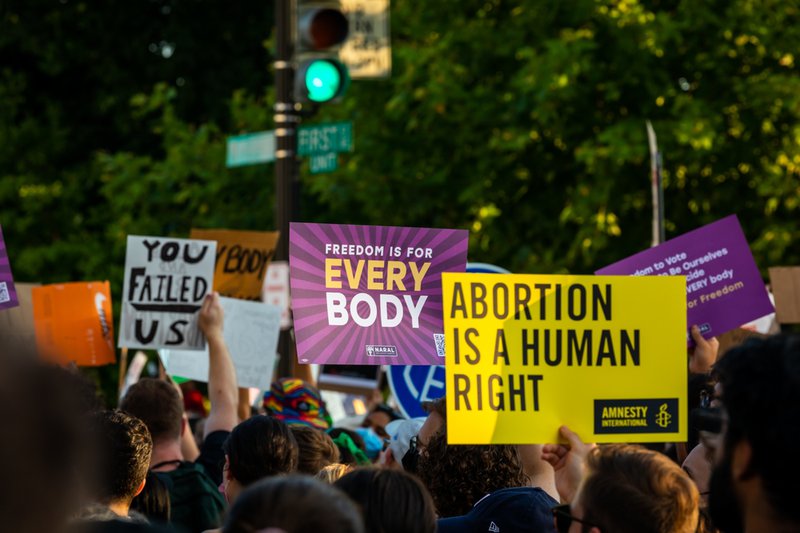 This Sunday, January 22, marks the 50th anniversary of Roe v. Wade — the landmark U.S. Supreme Court decision that established abortion as a constitutional right. It’s also the first anniversary since the Supreme Court overturned the ruling six months ago. Access to safe and legal abortions is crucial to protecting the bodily autonomy and economic security and freedom of women in the U.S. Since last year, 13 states and counting have banned or severely restricted access to abortion, and nearly half of all states are seeking to restrict access. Fights over more restrictions are taking place in courtrooms across the country.

Despite the grim news, some small victories offer us glimmers of hope. The Biden administration quickly took executive action to safeguard abortion protections and access in areas where the federal government has jurisdiction. More recently, the Food and Drug Administration announced that it will allow mifepristone — also known as the “abortion pill” — to be sold at retail pharmacies.

What’s next in a post-Roe America? Here are some recommended resources for understanding the state of reproductive justice in the United States today:

We Testify is a home for abortion storytellers, with a focus on elevating the voices and expertise of people who have needed and had abortions. Stories are told from a place of pride and power, and We Testify works to spotlight a diverse set of experiences, including from people of color, those from rural and conservative communities, those who identify as queer, those with varying abilities and citizenship statuses, and those facing stigma-based barriers to abortion.

Before Roe, a group of unlikely outlaws built an underground service for women seeking safe, affordable abortions in Chicago: They called themselves “Jane.” The Janes tells the story of the founders of this underground abortion network. This documentary spotlights the clandestine network that defied the state legislature that outlawed abortion, the religious sect that condemned it, and the mob that profited from it. In this pre-Roe era — when abortion was a crime in most states — the Janes risked their personal and professional lives to help an estimated 11,000 women in need of this essential healthcare procedure.

Death, Sex, and Money: “This Isn't Just About Abortion”

On this episode of the Death, Sex, and Money podcast, host Anna Sale discusses the Dobbs v. Jackson decision, which eviscerated the constitutional right to abortion in the United States. Anna talks with Laurie Bertram Roberts, co-founder and executive director of the Mississippi Reproductive Freedom Fund. Laurie shares what it was like to be in Mississippi, the state at the center of this landmark SCOTUS case, how the Freedom Fund’s work has changed in this post-Roe landscape, and why they’re both enraged, and yet hopeful,⁠ about the future.

In this episode of ABC’s hit television series Grey’s Anatomy — the medical drama that follows the personal and professional lives of the doctors at a Seattle hospital — Doctors Miranda Bailey and Addison Montgomery take a road trip to volunteer at a family planning center in eastern Washington, where they are dispatched to pick up a patient across state lines who later suffers fatal complications from an ectopic pregnancy. This episode dives deep into the stress that health care providers feel, the risks that patients and doctors are now forced to take in order to seek and provide reproductive health care, and the senseless death that occurs because of draconian laws.

After the Supreme Court overturned Roe v. Wade in June 2022, medical professionals in hospitals across the country who thought they could make a difference were silenced. CNN and the New York Times shared the stories of the life and work of healthcare providers and professionals in the aftermath of the Court’s historic ruling. These are stories of censorship and suffering, but also optimism for the future.

Preparing to Live in a Post-Roe v. Wade Country (The Thread, 2022): Vicki Shabo anticipates what will be at stake if millions of Americans lose access to safe, affordable abortions.