A Climate for Conflict: Stories from Somalia 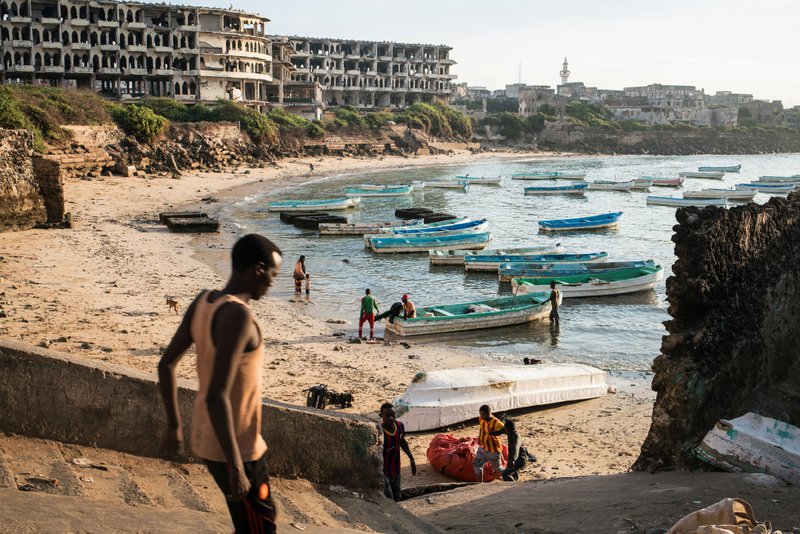 Earlier this week, New America joined with the Stanley Foundation and The GroundTruth Project to host an event about Somalia and climate change. The springboard for our discussion was two years of reporting by Laura Heaton and Nichole Sobecki, who lived in Kenya and traveled extensively in Somalia, collecting stories of a people struggling to survive.

Somalis have long lived near the edge, given the sometimes unforgiving, arid environment. At the same time, the pastoralists, farmers, fishermen, and merchants of the region have honed how to make the most of the land and long coastline. As Laura Heaton put it, this is one of the most resilient peoples in the world. But climate change and deforestation appear to be nudging the region into more frequent and worse droughts (Dr. Cheikh Mbow of START International did a great job of explaining the science at our event). There's just not much margin in Somalia to absorb that kind of change, and 2016 was an especially bad year, with both seasonal rains failing. As a result, more than 50% of the population (6 million people) is at an imminent risk of famine right now. In 2011, the last time both rains failed and provoked a major drought, 260,000 people died, so there is plenty of reason to be worried about the consequences today.

Of course, it's not just the drought that's the problem, and that was the crux of our event. Civil war has wracked Somalia since 1991, allowing militant and criminal gangs to flourish and exacting a steep price on the civilian population. In fact, there's a bit of a chicken-and-egg problem, when it comes to security. You can't restore the economy and polity without security, but you can't achieve security without a restored economy and polity, something Jon Kurtz of Mercy Corps talked about at our event. In these circumstances, climate change has become an "instability accelerant," in the words of the Pentagon. It didn't cause the war, but the war is magnifying the consequences, and the consequences are exacerbating the war.

So, I agree with what Vice Admiral Lee Gunn (USN, ret) said on our stage, which is that President Trump's decision to step up operations against the militant group al-Shabab, Somalia's most vicious predator, is good but insufficient. I think that when we send Americans into harm's way, we must be able to articulate not only why it's in our national interest to fight, but also what comes next -- how do we achieve stability and prosperity in the aftermath of  war?  So, what does come next, if the combined U.S.-Somali (and whoever else) special operations forces (SOF) are able to defeat al-Shabab in a meaningful way, at least for now? Of course, the last time the United States tried to answer that question in Somalia in 1993, it did not go well, a cautionary tale for everyone who works in U.S. national security. Based on that past and the President's campaign rhetoric, I'm not optimistic that the Administration will think beyond direct action and foreign internal defense SOF missions.

But, of course, our event wasn't about the United States, per se. So, as we were putting together the program, I quickly realized it would be important to have a Somali or Somali-American speaker. My brother, a brilliant historian of Africa, pointed me toward a doctoral candidate at Harvard named Safia Aidid. Safia was not available, unfortunately, but I listened to her online and read this blog, a tribute to a brilliant piece of satire by Binyavanga Wainaina. So, ouch. As a defense professional, I have been guilty of characterizing Somalia in the ways Safia described.

While I was unable to find a Somali-American expert to join the discussion, I did try to expand my own Somalia vocabulary. First, this is a country with a vaunted history. Historians believe the ancient Egyptians were talking about Somalia when they referred to the "Land of the Gods," as were the Romans when they spoke of the "Spice Promontory," in part a nod to the trading prowess of ancient Punt, as it was (and still is, in places) called. Just across the Gulf of Aden from the Arabian Peninsula, Somalis were early adopters of Islam, and the country remains today almost entirely Sunni Muslim and yet ethnically distinct. There were occasional attempts at conquest by Ethiopia in the 19th and 20th centuries, but it was really only the European powers that finally colonized the area, with all the divide-and-conquer tactics that have left such a terrible legacy across the continent. Somalia gained its independence in 1960, with almost a decade of democratic governance before a military coup in 1969. The new "Victorious Leader," Mohamed Siad Barre, held onto power all the way until 1991, surfing the waves of the Cold War in ways that served his own interests and that of both the Soviet Union and the United States. Siad Barre was a dictator, so there's no reason to cheer his reign, but his efforts to promote environmental stewardship were nonetheless important and effective. Of course, he catalyzed the collapse of the state, which has been an unmitigated ecological disaster ever since the civil war started in 1991.

You can see more about this recent history and the Somali and British researchers who have doggedly led the way in trying to integrate conservation into conflict resolution and peace building in the article Nichole and Laura wrote for Foreign Policy. This is a great piece of storytelling, both in words and images. ABC's Nightline also featured a story on May 29th based on the same reporting. It can be hard to see a way forward for Somalia, given the intricate connections between environmental degradation, humanitarian disaster, violence, poor and corrupt governance, and outside influences, but the ground truth we got in this event is that Somalis themselves haven't given up. And that is ultimately a cause for optimism.