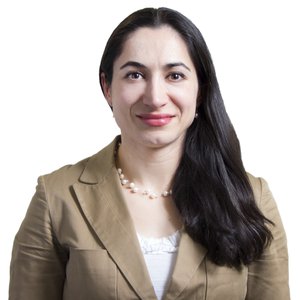 Ladan Fakory was a fellow with the health policy group at New America, where she provided research and analyses on domestic and global health issues.

She has 11 years of policy design and project management experience across U.S. Department of State, U.S. Agency for International Development (USAID), and Walter Reed Army Institute of Research (WRAIR). She has focused on a full spectrum of global health issues, including HIV/AIDS, maternal and child health, and the U.S. Global Health Initiative. Her passion lies at the intersection of development and diplomacy. In 2013, she led USAID’s flagship event at the UN General Assembly, “Millennium Development Goals (MDGs) Countdown: Girls and Women Transforming Societies,” which highlighted how the empowerment of women and girls has accelerated progress towards the MDGs. In 2012, she was the U.S. government health lead for the G-8 and authored the health chapter for the 2012 G-8 Camp David Accountability Report.

Ms. Fakory earned a B.A. in Biopsychology at University of Maryland, Baltimore County (UMBC) and a Master’s in Public Administration (M.P.A.) from the Harvard Kennedy School. She is fluent in Persian (Farsi) and conversant in French.