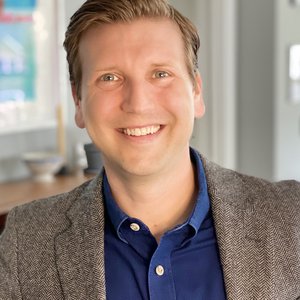 John Sessler is an education consultant committed to creating early learning experiences that develop empathy, curiosity, and critical thinking. John began his career as a professional stage actor in Chicago but found his calling while serving as a teaching artist and curriculum designer with the Kohl Children’s Museum StoryBus in Chicago and the Children’s Theatre Company in Minneapolis. He transitioned to children’s media nearly a decade ago after studying at Harvard’s Graduate School of Education, bringing his perspectives as an artist, teacher, and program designer to PBS. As the leader of educator engagement and training strategy for PBS LearningMedia, John designed virtual learning events with Google, the Institute of Play, filmmaker Ken Burns, the U.S. Department of State, and the Office of the First Lady Michelle Obama. As a full-time consultant, John has collaborated with the Right Question Institute to design and facilitate a popular online course for the Harvard Graduate School of Education. John continues to support PBS and its member stations with early learning initiatives; most recently, he led the design of a 20-city pilot for the PBS KIDS Educator and Community Learning series developed as part the CPB-PBS Ready to Learn Initiative. John holds an Ed.M. from the Harvard Graduate School of Education and a B.S. from Northwestern University.