Beyond the Echo Chamber

How a Networked Progressive Media Can Reshape American Politics 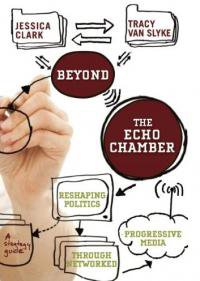 What do high-impact projects look like? What are the common goals against which success might be measured in the progressive media sector? -- Beyond the Echo Chamber

In less than a decade, a new breed of progressive media projects--from the Huffington Post to Air America to Brave New Films--not only have captured huge, nontraditional audiences, they also have shaped political campaigns, public debates, and policy in ways that could never have been imagined in a previous era. As the upstarts struggle to gain attention and respect in a media sphere dominated by corporate and entertainment interests and roiled by an influx of user-driven content, the fight is clearly on.

In Beyond the Echo Chamber, media experts Jessica Clark and Tracy Van Slyke lay out a clear, hard-hitting theory of media impact, drawing on years of research, extensive interviews, and case studies with key media players and new media experts across the country. The book showcases influential projects such as TPM Café, FireDogLake, and Feministing, suggesting ways in which media makers can exploit changes in journalism, technology, and politics.

For the broad cross-section of progressive journalists, bloggers, producers, activists, and readers committed to change, here is a first-ever road map to victory and a book that will change the national conversation about progressive media.