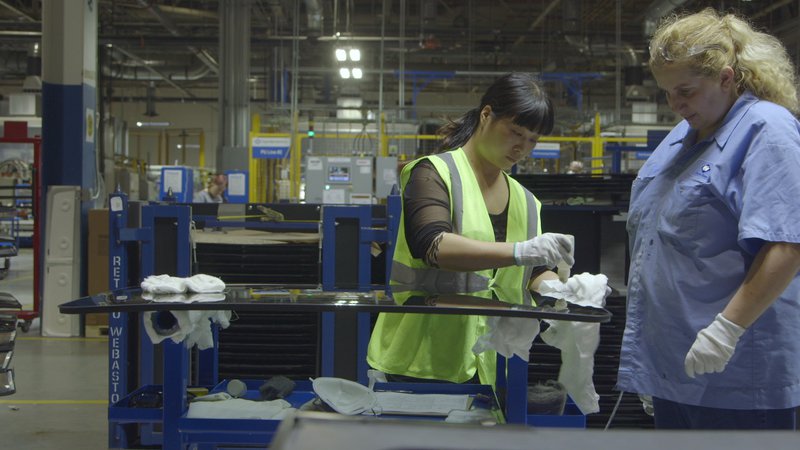 A little more than two years after General Motors shuttered operations in Dayton, Ohio, a Chinese billionaire came to town to open an auto glass factory in GM's abandoned plant. Hiring 2,000 Americans, Fuyao Glass America kicked off with fanfare and highest hopes, saving many local blue-collar workers from having their homes foreclosed and cars repossessed.

Steve Bognar and Julia Reichert's American Factory, winner of the 2019 Sundance Film Festival Best Directing Award, and the first film to be released by Barack and Michelle Obama's Higher Ground Productions, follows with remarkable access how tensions build as Chinese management and American workers struggle to overcome language barriers and extreme cultural differences. Chinese see the Americans as lazy and too "chatty," while the Americans are challenged to understand how the Chinese work with few weekends and holidays, their families thousands of miles away. As the factory faces millions of dollars of losses and pressures mount, American managers are let go and the local workers, fearing unsafe working conditions and unfair treatment, move to unionize, unaware that automation and robotics may soon eliminate many of their jobs forever. With humor and candor, American Factory reveals how profoundly differently the Chinese and American workers view their allegiance to authority and gives viewers an up-close look at one of the most significant cultural and economic conflicts of our times.

On Monday, August 5, join New America NYC at Betaworks Studios for a pre-release screening of American Factory and a conversation with the filmmakers and labor experts that looks at the future of work in an era of globalization and automation.

Josh Freeman
Author, Behemoth: A History of the Factory and the Making of the Modern World
Distinguished Professor, History, City University of New York (CUNY)

Follow the conversation online by using #AmericanFactory and by following @NewAmericaNYC.

Seating is available on a first-come, first served basis.
Doors will open to a reception at 6:00 pm followed by the screening at 6:30 pm.