Protecting Workers in a Patchwork Economy 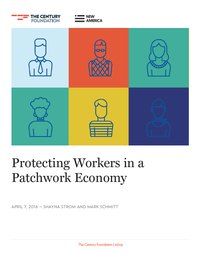 This paper was jointly published with The Century Foundation.

Work, once a matter of years of commitment to a single trade, career track, or even one employer, has in recent years undergone a radical transformation. From measuring work in units of decades, all pointed toward an engraved watch at retirement, we have swung far in the other direction, toward a world in which work will sometimes consist of brief transactions with multiple clients, customers, or employers.

New technology has enabled apps such as TaskRabbit and Lyft, which allow us to measure work in units of minutes, seconds, or fractions of a mile moved. But it is easy to be distracted by the sparkle of new technology, or the changes in our own experiences as consumers, and fail to see the underlying transformation of work for many Americans—from something that generally provided security and self-sufficiency, toward a world in which workers themselves bear most of the economic and personal risk. The jobs in the “gig” or “on-demand” economy that have transfixed journalists and pundits are still a relatively small part of the overall labor market, but the situation of workers in gig economy jobs is not starkly different from those in less technology-centric jobs whose work falls outside of traditional labor and employment law protections—taxi drivers, domestic workers, delivery drivers, and temp agency workers. We call this broader set of work experiences the “patchwork economy”—a patchwork of jobs and a patchwork of protections—encompassing gig workers and non-gig workers alike, all of whom struggle with gaps in the safety net in various ways.