An Examination of Western Hostage Policies 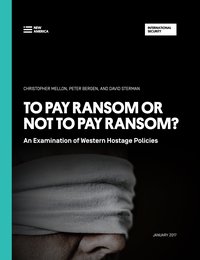 In 2014, the world looked on in horror as ISIS murdered its American hostages in Syria. The beheadings were among the most widely followed news stories in recent history; more than nine out of 10 Americans had heard of them by September of 2014. 1 The ISIS cases were the latest in a long history of international hostage-taking incidents. Since 2001—the year of the 9/11 attacks—at least 1,185 Westerners from 32 countries have been taken hostage overseas by terrorist, militant, and pirate groups.

Some of the families of the Americans abducted and murdered by ISIS have questioned the U.S. government’s handling of their cases, saying that the lack of a well-coordinated, effective hostage policy contributed to their distress and possibly to the deaths of their loved ones. Their concerns were echoed by current and former government officials who called for the United States to formulate a more effective and humane hostage policy.2

While these outcomes are likely due in part to the United States’ prominent international role and the target it places on American citizens, the United States’ strict adherence to its no-concessions policy has also contributed to the failure of American efforts to recover hostages.

The no-concessions policy is defended on the basis that paying ransoms would create incentives for U.S. citizens to be kidnapped and that ransom payments finance terrorist groups. No clear evidence exists to support the claim that Americans are targeted less often because of the no-concessions policy. On the other hand, there is strong evidence to suggest that a no-concessions policy puts hostages at greater risk once abducted. And although ransom payments have undoubtedly provided large sums of money to terrorist groups, for a group like ISIS, kidnapping Westerners is only a minor source of revenue. There are ways to deprive these groups of funding that do not cost American lives.3 In addition, the negotiation of ransom payments or other concessions represents an opportunity for Western governments to collect information needed to trace and root out terrorist kidnappers.4 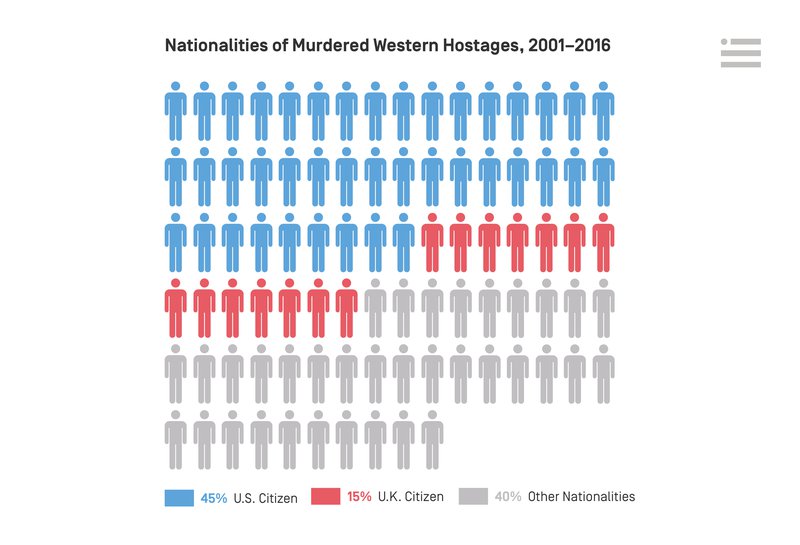 Hostages from European countries known to pay ransoms are more likely to be released. Hostages from countries such as Austria, France, Germany, Spain, and Switzerland are far more likely to be freed, even when they are held by the terrorist groups that are most likely to murder their hostages. Eighty-one percent of European Union hostages held by jihadist terrorist groups were freed, compared to 25 percent for the United States and 33 percent for the United Kingdom 6

Citizens of countries that make concessions such as ransom payments do not appear to be kidnapped at disproportionately high rates. There is no clear link between a nation’s ransom policy and the number of its citizens taken hostage. The United States had the most hostages taken since 2001 with 225, followed by Italy with 148, France with 143, and the United Kingdom with 137. Kidnappings are driven primarily by conditions of general instability in countries such as Iraq, Syria and Yemen, rather than by the targeting of particular nationalities.

American and British citizens taken hostage by al-Qaeda and ISIS fare worse than continental Europeans taken hostage by these groups. Of the 130 Westerners kidnapped by al-Qaeda and its affiliates, more than three-quarters were freed. Only two of the eight Americans taken by these groups were freed. Three were murdered, one was killed in a U.S. drone strike, one was killed during a rescue attempt, and one remains in captivity.

Fifteen Americans were taken hostage by ISIS and its precursor groups.7 Thirteen were murdered, one died in captivity, and one was released.

Three of the four British hostages taken by ISIS and its precursor groups were murdered and one remains in captivity.

Of the 16 continental European hostages held by ISIS in Syria, 14 were released. 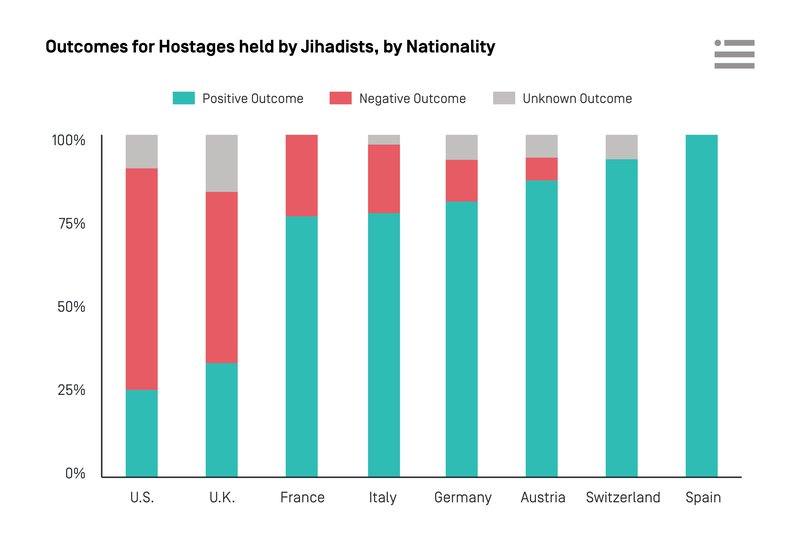 Eight out of 10 EU hostages8 held by jihadist terrorist groups were freed compared to one in four9 for the United States and one in three10 for the United Kingdom.

Rescue operations are dangerous and often result in hostage deaths. Attempts to rescue hostages held by jihadists were fatal to the hostage 20 percent of the time. Six of the 12 Western hostages in our database who died during rescue attempts were American or British. American and British raids have also resulted in the deaths of hostages from other countries. South African Pierre Korkie and American Luke Somers were killed in a U.S. attempt to rescue them in Yemen from Al-Qaeda in the Arabian Peninsula in 2014. Korkie was killed hours before he was to be released after a ransom payment of $200,000 was made.12

The French government’s efforts to move toward a no-concessions policy in 2010 led to an increase in hostage deaths. Twelve of the 16 French hostage deaths in our database occurred after the attempted rescue in 2010 of Michel Germaneau, an aid worker held by Al-Qaeda in the Islamic Maghreb in Niger. President Nicolas Sarkozy identified the raid as marking a “major turning point,” after which France resolved to be tougher on kidnappers by making fewer ransom payments and attempting more rescues. These deaths include that of Germaneau, who was murdered after the failed raid. Four other hostages were either killed during rescue attempts or murdered in reprisal for attempted or threatened raids. It should be noted that the French did not cease to pay ransoms altogether; for instance, they made payments to ISIS in 2014.

Since a new U.S. hostage policy was announced in the summer of 2015, which focused on better coordination across the government to secure the release of hostages and better U.S. government communications with the families of hostages, at least six American hostages have been released and one has died in captivity. However, none of these publicly identified hostages that were released were held by jihadist terrorist groups. Two were held by unidentified, probably criminal, groups in Nigeria and four were held by the Houthis, a Shia militia that now controls much of Yemen.  U.S. citizen John Hamen was held by the Houthis and died under mysterious circumstances in November 2015. It is possible that he was the first American hostage deliberately killed by his captors since the 2015 policy reforms.

The Hostage Recovery Fusion Cell, an interagency coordinating unit of the U.S. government, says that since its establishment in 2015 it has overseen the release of approximately 100 hostages, a quarter of whom were held by terrorist groups.13 The Fusion Cell has not provided any details on these cases, and it is unclear if any of these released hostages were held by jihadist terrorist groups.

It is likely that many of the 100 released hostage cases involved kidnappings by organizations that have not been designated as Foreign Terrorist Organizations by the U.S. State Department. Some cases may also have been classified as terrorist incidents because of intelligence assessments linking them indirectly to terrorist groups. The kidnapping of American Wren Thomas by Nigerian pirates in 2013 may be one such case. Though a Nigerian navy spokesman called his kidnappers “common criminals and pirates, not militants,” Thomas’ abduction was recorded as a terrorist kidnapping in the State Department’s 2013 Country Reports on Terrorism. 14 15 Thomas said that after his release the FBI told him the ransom money paid for his freedom may have been directed to Boko Haram, a Nigeria-based terrorist group.16

The full report can be accessed below.

5 If we exclude the cases with unknown outcomes we find that 28 percent of American hostages were killed or remain in captivity, compared to an international average of 12 percent.

6 Excluding the United Kingdom, which has a similar policy to the United States

11 American journalist Austin Tice, missing in Syria since 2012, is included in the database, but is not listed here because there has been no public proof of life within the last six months.