The Western Militant Flow to Syria and Iraq 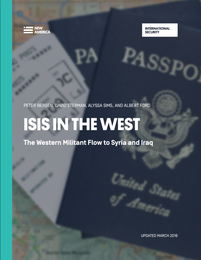 Only four days prior to the attacks, Belgian police captured Salah Abdeslam, the only surviving attacker to have participated in the Nov. 13, 2015 Paris attacks that killed 130 people. Abdeslam told Belgian authorities after his capture that he was “ready to restart something from Brussels.”

The links between the Paris attackers and the Brussels terrorists raises the importance of understanding who the Western “foreign fighters” who have left for Syria are, how deep their networks run, and what threat they pose when they return to the West.

In order to answer these questions, New America has examined 604 militants from 26 Western countries who have been reported by credible news sources as having left their home countries to fight with ISIS or other Sunni jihadist groups in Syria or Iraq. (In this updated version of the “ISIS in the West” report that New America released in November 2015, we have added 130 more individuals to our dataset.)