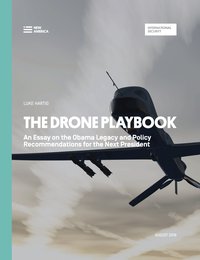 In May 2013, just weeks before the Snowden leaks and two years after the death of Osama bin Laden, President Obama delivered an ambitious policy speech in which he laid out a new era for U.S. lethal drone operations and explained his recently issued Presidential Policy Guidance (PPG). In the three years since, as reports emerged on controversial drone strikes, the Administration consistently referred to the PPG and its standards, particularly its focus on preventing civilian casualties. But the document itself remained concealed from the public, classified at the highest levels, and available only to the officials dealing with these operations.

In August 2016, in the face of litigation, the Administration released the document, providing the first public glimpse of the drone playbook. The release came just one month after the official disclosure of statistics on U.S. drone strikes outside active war zones. It will surely drive vigorous debate over how the next President ought to employ drones against terrorists.

International Security program fellow Luke Hartig joined the National Security Council staff two weeks before President Obama approved the PPG. He contributed to its development from the Pentagon, and coordinated the implementation of the policy in Yemen and then globally, during three years at the White House. The Drone Playbook: An Essay on the Obama Legacy and Policy Recommendations for the Next President details the origins and purpose of the PPG, lessons learned from its implementation, and recommendations for the next president.