China's De-extremization of Uyghurs in Xinjiang 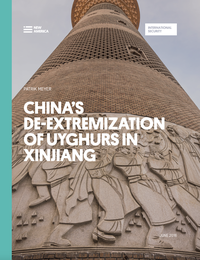 Despite numerous economic development campaigns, massive security operations, and intensive ideological education programs in the last 20 years, the Chinese government has failed to achieve the harmonious, multiethnic, and prosperous society that it desires for the Xinjiang Uyghur Autonomous Region (Xinjiang). Instead, interethnic relations between the Chinese Uyghur ethnic minority and the dominant Han have deteriorated since the early 1990s. Given the failure to achieve a harmonious and prosperous Xinjiang, it is important to question the suitability of the regional security policy being implemented by the Communist Party of China (CPC).

To provide the necessary background to the current sociopolitical situation in Xinjiang, this paper first describes how, between 1990 and 2010, the Chinese government gradually turned Uyghur national identity and Islamic practices into national security threats, i.e., extremized/securitized them. The securitization allowed the CPC to legitimately restrict many of the Uyghurs’ cultural and religious rights enshrined in Chapter II, Article 36 of the Constitution of China and protected by Chinese laws.

Then, it reviews the three-year ideological de-extremization campaign that started in 2014, which is the latest government effort to achieve ethnic unity and ensure regional stability in Xinjiang. By using a combination of economic development incentives and pervasive security measures to support a series of intensive ideological de-extremization education programs, the government is following a carrot-and-stick approach to promoting ethnic unity and Chinese national identity among the Uyghurs. The program seeks to first weaken the Uyghurs’ ancestral national identity, which is strongly shaped by Islamic beliefs and practices. For this purpose, numerous grassroots propaganda programs in the form of educational and social activities are used, of which the de-extremization pictorial competitions are a part and subsequently discussed in more detail in this paper. The paintings produced in these competitions provide a useful view of what Beijing wants the Uyghurs to love and to submit to (e.g., China and the CPC), and what it wants them to consider as backward and dangerous threats (e.g., Islamic belief and practices). Numerous economic benefits are offered to those Uyghurs who are willing to submit to the CPC’s unconditional authority and to being “Sinicized,” or the process by which China’s non-Han Chinese population adopts the majority Han Chinese population’s customs and practices.

Finally, this paper seeks to answer two fundamental questions: What is the real purpose of the de-extremization campaign? And will it help improve interethnic relations and make Xinjiang more prosperous? It finds that Beijing’s current labels of extremism and terrorism in Xinjiang are the result of the CPC’s securitization campaign conducted between 1990 and 2010, which slowly turned Uyghur nationalism and numerous Islamic practices into existential threats. Hence, the de-extremization campaign may not be aimed at fighting international Islamic terrorism, as stated by the CPC, but rather at forcefully assimilating the Uyghur community into the larger Chinese nation, which the campaign will fail to do. While the majority of Uyghurs might temporarily yield to Beijing’s Sinification campaign, it can be expected that a significant minority among them will resist it and adopt a more radicalized stance against the Chinese state. Ultimately, the de-extremization campaign will produce a hopeless and angry group of Uyghurs that will undermine Xinjiang’s long-term security, stability, and development.