The New Faces of Extremism 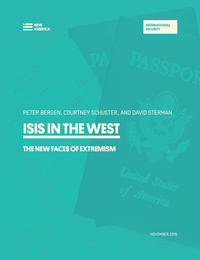 Who exactly are the estimated 4,500 Westerners drawn to join ISIS and other militant groups in Syria, and how great of a threat do they pose? In the wake of Friday’s harrowing terrorist attacks in Paris, New America’s Peter Bergen, Courtney Schuster, and David Sterman are today publishing “ISIS in the West: The New Faces of Extremism,” a new report reviewing what we know about the Westerners drawn to Jihadist groups.

New America has collected information about 475 individuals from 25 Western countries who have been reported by credible news sources as having left their home countries to join ISIS or other Sunni jihadist groups in Syria or Iraq.

On Tuesday, November 17, New America will hold an event to further discuss findings from the report. Please RSVP here to attend. On Wednesday, November 18, Peter Bergen will be testifying about ISIS and the West at a joint hearing of the House Committee on Foreign Affairs and the Committee on Homeland Security.