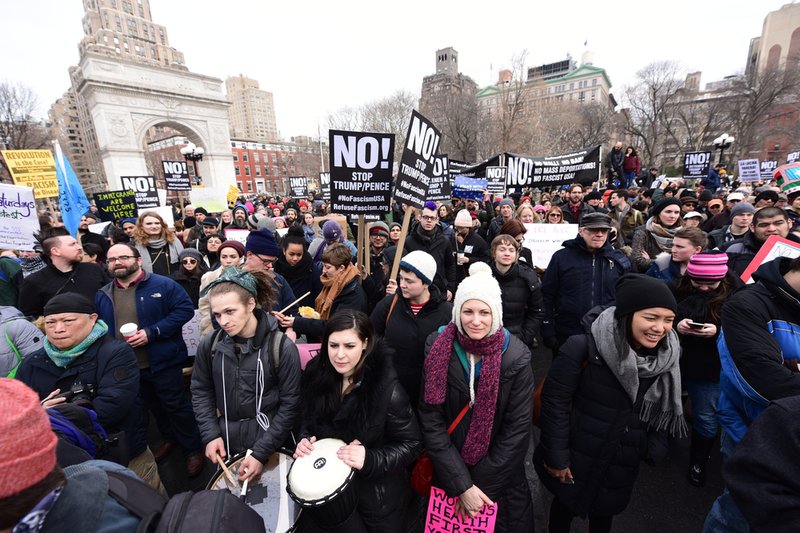 With no evidence that the travel ban would have prevented a single death in a jihadist terror attack since 9/11, the Trump administration has resorted to citing a number of irrelevant and misleading cases in order to justify the ban.

“First of all, 72 individuals, according to the Center for Immigration Studies, have been implicated in terroristic activity in the United States who hail from those seven nations, point one.”

However, the report cited by Miller includes only three individuals who actively plotted terrorist attacks inside the United States. None actually conducted a terror attack - let alone a deadly one. All three were monitored by informants and undercover operatives during the plotting.

Mohamed Osman Mohamud, who came to the United States with his family as refugees from Somalia, was arrested on November 26, 2010 and later convicted of attempting to use a weapon of mass destruction - specifically a bomb plot targeting a Portland Christmas Tree ceremony. However, the case does not provide support for a travel ban. Mohamud came to the United States as a child. He was born in 1991 and his family came to the U.S. in 1993.  His radicalization was homegrown - occurring in the United States - and his case is therefore not a case of infiltration. Furthermore, his father, who did come from Somalia as an adult, provided a tip to the FBI regarding his son’s activity. The attack plot was developed under the close monitoring and supervision of an undercover operative.

Yassin Aref, an Iraqi Kurd who came to the United States as a refugee in 1999 after having spent five years as a refugee in Syria, was convicted in 2006 for participating in a plot with a man who said he was planning to attack the Pakistani ambassador in New York City. However, the case does not provide strong support for a travel ban. Aref entered the United States prior to 9/11 when terrorism was not a major concern and the multi-billion dollar intelligence apparatus to secure the United States and provide intelligence on suspects did not exist. Furthermore, the attack plot was developed under the watch of an undercover officer/informant. Then Deputy Attorney General James B. Comey stated: “The terrorist plot in this case is one that the government's agent, the cooperating witness, represented to be underway. It was not real.”

Manssor Arbabsiar, who was born in Iran, is a naturalized U.S. citizen and maintained valid Iranian and U.S. passports, was convicted in 2013 of participating in a plot to assassinate the Ambassador of Saudi Arabia to the United States. In attempting to plan the attack, Arbabsiar was under the surveillance of a Drug Enforcement Administration (DEA) confidential source, who was posing as a member of a Mexican drug cartel – based in Mexico – with whom Arbabsiar thought he was paying and contracting to commit the attack on the Saudi Ambassador. The Department of Justice alleges that the plot was “directed by elements of the Iranian government,” alongside “Gholam Shakuri, an Iran-based member of Iran’s Quds Force.” To what extent this was the case is unclear, and the Iranian government denies any involvement. In addition, Arbabsiar was not motivated by Bin Laden’s jihadist ideology. During his sentencing hearing in May 2013, Arbabsiar told the judge, “My mind sometimes is not in a good place,” possibly suggesting mental health issues or instability.

The report Miller cited is also based on flawed data.

The report includes four cases of individuals who did not enter the United States, but were detained in another country and extradited to face trial in the U.S.

1.       Ahmed Abdulkadir Warsame did not enter the United States. He was a Somali captured between Somalia and Yemen.

2.       Siavosh Henareh was not a U.S. citizen or resident, was detained in Romania and then extradited to the United States.

3.       Wesam Al Delaema was not a U.S. citizen or resident but an Iraqi-born Dutch citizen extradited to the United States.

4.       Monzer Al Kassar was not a U.S. citizen or resident but an international arms dealer extradited to the United States.

More than one in five of the 68 cases listed (excluding the four cases that did not involve an individual entering the United States) did not have a link to terrorism.

Eleven of the individuals listed -- or 16% -- were charged with fraud and related charges in relation to their obtaining licenses to haul hazardous materials. None of the charges were terrorism charges, and Robert Cindrich, a former district judge who heard the case, stated that he would “not continue to characterize this as a successful prosecution of a terrorism case, because it was not.” The U.S. Attorney’s Office that prosecuted the case similarly confirmed publicly that the men were not linked to terrorism.

In another three cases - those of Mohamed Al Huraibi, Yehia Ali Ahmed Alomari, and Saleh Mohamed Taher Saeed -- federal prosecutor Bret Puscheck stated “This is simply a money laundering case. There are no charges claiming that they were giving money or aiding any terrorist organizations.”

In one case, that of Pirouz Sedaghaty, the conviction on terrorism-related charges was overturned by the appeals court. Judge M. Margaret McKeown wrote for the three judge panel: “This is a tax fraud case that was transformed into a trial on terrorism,” adding, “The appeal illustrates the fine line between the government's use of relevant evidence to document motive for a cover up and its use of inflammatory, unrelated evidence about Osama bin Laden and terrorist activity that prejudices the jury.”

The report also includes other cases that on closer inspection do not provide support for a travel ban.

For example, the report includes Zeinab Taleb-Jedi, a naturalized American citizen from Iran, who was originally charged with material support to the Mujahedeen-e-Khalq and convicted of violating export license laws. However, the MEK does not pose a threat to the United States, and it was delisted as a terror group in 2012.

Even if it could be considered a true terror threat, Taleb-Jedi’s case provides no support for a travel ban. Taleb-Jedi entered the United States in 1978, almost two decades before the MEK was listed as a terrorist organization in 1997, and became a naturalized citizen a year before the group was listed. During the 1990s, she was registered as a press officer for the group under the Foreign Agents Registration Act. She left the United States in 1999 and was arrested at the airport when she did return. Her pending return was known as she had been monitored and interviewed after American forces took control of the MEK’s Camp Ashraf base.

Finally, the cited cases reflect a pre-9/11 security and immigration environment, not the current rigorous screening of refugees using greatly expanded intelligence capabilities developed in response to the 9/11 attacks.

Of 27 cases for which a date of entry could be identified (using CIS’ data combined with New America’s own research), 21 cases or 78 percent entered the United States before 9/11. That constitutes more than 30 percent of all 68 cases.