Why Student Loans Are Different 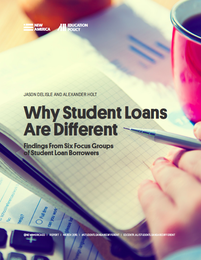 The limitations of existing data on federal student loans have left the policy community with an incomplete picture of how borrowers interact with the student loan program and what drives decision making and behavior. Data are largely limited to a borrower’s repayment status and her other types of debt, and in some cases include her income and educational attainment. Analyses therefore focus on correlations within this information and theories fill in the blanks.

To seek a broader explanation of student loan struggles, New America’s Education Policy Program commissioned a series of six focus groups across the country that met between June and October 2014. The result of that research is our new report, Why Student Loans Are Different. The nonpartisan public opinion research firm FDR Group conducted the focus groups, and their paper,  Taking Out and Repaying Student Loans, is also available on this here.

While focus group research has its own limitations, the findings in this report help to broaden our understanding of borrower behavior and attitudes. Throughout the discussion of various aspects of the student loan system, the focus group participants emphasized that they perceive and interact with student loans in a fundamentally different way than other forms of debt and financial obligations.

To a certain extent, the very design of the student loan program encourages this. Certainly, the majority of borrowers in the system repay on time, and the government expects a certain level of personal responsibility from its citizens, but it is telling that many of the participants from the focus group pay their other bills while not making payments towards their student loans. The flexibility and leniency the system provides encourages borrowers to make student loans a low priority, fueling rising loan balances, delinquency, default, and resentment.

The way that borrowers take out student loans (many loans over several years with interest accruing while in school) leads to surprising loan balances and monthly payments. Borrowers have to make payments for many years, long after they feel that they are using the service or asset they financed, making the debt seem more like dead weight than something worthwhile.

Many of the participants either did not finish school or have jobs unrelated to their degrees despite the promises made to them by schools, fueling the idea that the loans are of little value and not worth paying back. With that context, it’s unsurprising that many borrowers in the focus groups expressed the belief that it was too easy to qualify for a federal student loan.

Couple that resentment with a federal loan system where postponing, delaying, and procrastinating are very nearly encouraged, and it is unsurprising that so many borrowers are late, delinquent, or enrolling in forbearance. This aspect of the repayment process (the ease with which borrowers can postpone payments) was designed with the best of intentions: the assumption is that people only postpone payments because they absolutely cannot pay. But these benefits become a vicious bait-and-switch for many borrowers. Although it is easy to procrastinate, eventually the time comes to repay, but the loan balance and monthly payment have grown larger, as have the resentful feelings towards it.

Other loans and financial obligations have value right now, in the present, and the consequences for not paying are swift and severe, like higher interest rates, late fees, discontinuation of service, or repossession of an asset. Not with federal student loans. In every part of the process—from taking out the loan, to delaying payment, to ignoring payment, to default—borrowers have a fundamentally different relationship to their federal student loans than any other financial products they encounter.

The solution is not to admonish borrowers for laziness or irresponsibility, but to reexamine what makes federal student loans different, and what processes and incentives can be put in place to correct for those differences. These run the gamut, and difficult tradeoffs are present. Informing students more about the risk of the loans they take on, for instance, could discourage at-risk students from attending in the first place. Cutting off federal student loans for certain types of under-performing schools could reduce access to higher education.

These focus groups are the beginning, not the end, to a new type of research of how borrowers interact with the federal student loan system, less based on correlation and more based on behavior and psychology. All the financial data in the world cannot tell us why a borrower is not repaying. Only the borrower can tell us that.