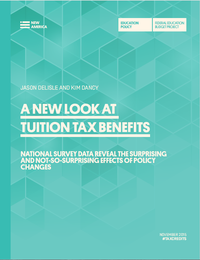 The brief looks at how eligibility for tax benefits is distributed among all undergraduates and how that has changed since 1999; the characteristics of students and families who cannot claim benefits; how eligibility and benefit amounts differ based on the type of school a student attends; and how tax benefits interact with other forms of financial aid. It also compares how tax benefit eligibility would have changed if the $2,500 American Opportunity Tax Credit (AOTC) had expired by the 2011-12 school year.

Some of the key findings included:

“The results show the AOTC is a boon to students attending for-profit schools and does little for students attending community colleges, which is likely the opposite effect its supporters intended,” said Kim Dancy, New America Education Policy Analyst and co-author of the report.

The full report can be accessed here.