Memo to Duncan: Investigate the University of Phoenix

Soon after Arne Duncan is officially sworn in as the new U.S. Secretary of Education, he should make a real and immediate break with the past by opening an investigation into allegations that the University of Phoenix (UOP), the country's largest chain of for-profit colleges, has deliberately and improperly attempted to manipulate its cohort default rate and, by doing so, put students in harm's way. 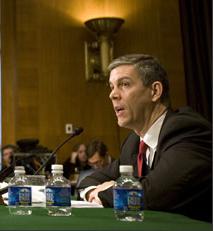 The allegations came to light last week when the details of a federal class action lawsuit brought in December by three former University of Phoenix students became public. According to the lawsuit, which was filed in the U.S. District Court in Little Rock, Ark., the university has been paying off the federal loans of students who drop out soon after enrolling without their "knowledge or consent." The institution then allegedly turned around and demanded immediate repayment from these former students of tuition owed.

These practices, which appear to violate the Higher Education Act, harm students by denying them more-generous loan repayment terms offered by the federal government. The University of Phoenix "deprives students of the benefits of the terms on which they borrowed money (i.e. low interest and six month grace period in which to start paying) and saddles them with an immediate debt and payment terms which were never acceded to by the student by contract or otherwise," the lawsuit states. "Unsuspecting students are routinely bombarded with calls, letters and e-mails from UOP to collect tuition along with threats that refusal to pay will result in referral to collection agencies and negative reports on their credit."

The university engaged in these practices, according to the lawsuit, to "artificially deflate" its cohort default rates by ensuring that students who drop out from its programs can not default on their federal student loans. This allegedly helps the institution remain below the threshold at which it would face federal sanctions, including the potential loss of federal financial aid funds (lesser penalties include a requirement for the school to delay for 30 days the release of federal student loan proceeds for first time borrowers and a permanent loss of eligibility to participate in "school as lender" program, which the university has been heavily involved in). Numerous studies have shown that student loan borrowers who drop out of college are at a much greater risk of defaulting on their debt than those who complete their programs.

While only three former students filed the class action lawsuit, the plaintiffs estimate "that there are thousands of borrowers" who have been treated similarly by the university. And these practices do not appear to be isolated at the University of Phoenix. In May, the Department of Education's Inspector General recommended punitive action against another proprietary institution, the New York-based Technical Career Institute, for engaging in nearly identical activities. In a report last week on the UOP case, The Chronicle of Higher Education noted that "other for-profit colleges follow similar payback policies."

One of the first things that Duncan should do in his new job is to call for an immediate investigation into the allegations against the University of Phoenix, as well as a broader inquiry to determine whether the practices alleged in this case are widespread throughout the for-profit higher education sector.

For too long, the Department of Education, under the Bush administration, looked the other way as accusations of improprieties and wrongdoing have occurred at our nation's for-profit colleges and trade schools. Low-income and working-class students have suffered as a result of such neglect.

Hopefully the Obama administration will put the interests of students before those of deep-pocketed trade school lobbyists. That would - dare we say it -- be change we can believe in.