We have long been concerned about the close ties between the student loan industry and the National Association of Student Financial Aid Administrators (NASFAA), an organization that lobbies on behalf of college aid officials. These ties have been so strong in recent years that the group's policy positions on student loans have more often than not mirrored those of the Consumer Bankers Association and Sallie Mae.

NASFAA's leaders deny that lenders have influence over the organization's policy positions. In arguing this point, they often note -- as the group's former president Dallas Martin did in an interview with The Wall Street Journal last year -- that the association prohibits loan industry officials from serving on its national board or voting "on policy and membership issues."

What they fail to mention, however, is that these rules do not apply to the organization's state affiliates and regional associations. In fact, by most accounts, these groups depend heavily on student loan providers for both leadership and financing.

At Higher Ed Watch, we set out to investigate the extent of lenders' involvement in NASFAA's state affiliates. We looked at the membership of the organizations' executive boards, committee chairmanships, and equivalent leadership positions. We were able to obtain data for 37 of the 49 state chapters (Delaware, the District of Columbia, and Maryland have one group). Password protections and nonfunctioning websites prevented us from being able to access information on the other 12 chapters.

The results are striking. All told, of the 892 individuals serving in leadership positions at these 37 state affiliates during the 2007-08 academic year, 170, or 19 percent, were members of the loan industry.

In some states, these ties are particularly strong. For example, in four states, loan industry officials were actually in charge of the NASFAA affiliates. In Rhode Island, the president of the Rhode Island guaranty agency served as the state chapter's president, while the leader of Rhode Island's state-affiliated non-profit lender served as its treasurer. Officials with American Education Services, the Pennsylvania Higher Education Assistance Agency's national brand, led the Delaware and the District of Columbia affiliates. An official with EdFund, a national guaranty agency based in California, was the Maryland chapter's president.

Even if not run by lenders, some state affiliates have a particularly strong lender presence. For example, at NASFAA's Arizona chapter, loan industry officials make up 48 percent of board members and committee chairs, including the organization's treasurer, treasurer-elect, and the co-chairmen of the membership, state legislative affairs, and newsletter committees. The joint DE/DC/MD group also contains a large number of lenders, with loan company officials making up 45 percent of its leadership positions. 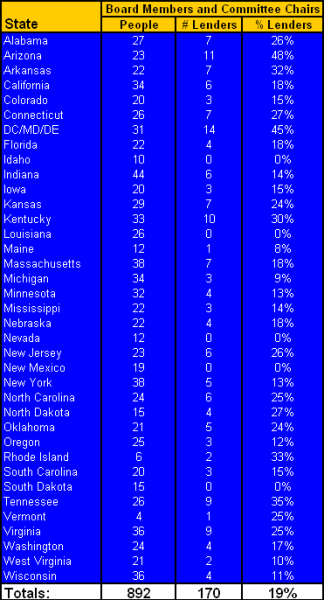 In addition to occupying major leadership positions, lenders can also assert their influence via corporate sponsorship of websites, newsletters, and the associations' annual conferences. For example, 12 state affiliates display ads for loan companies on the main page of their website. Of these, Georgia's state chapter had the most sponsors, with ads for 11 different banks and loan companies.

The powerful role that the loan industry has played in helping lead and finance these organizations can be seen in the stances they have taken on some of the most controversial loan issues in recent years. Many of these state financial aid officer groups helped lead the opposition to the Student Aid Reward (STAR) Act, a bipartisan bill that would have rewarded colleges that entered the Direct Student Loan program with additional need-based grant aid. Schools and students participating in the Federal Family Education Loan Program would have lost nothing.

Some state chapters even received a reprimand from NASFAA's leadership for pushing a proposal, championed by the loan industry, to raise the interest rate on PLUS loans taken out by parents and graduate students through the Direct Loan program.

NASFAA's leaders know that the ties between lenders and its state affiliates are problematic, but they don't seem to know quite what to do about it. In a recent interview with Higher Education Washington Inc., Philip Day, the association's relatively new president, talked of "a candid conversation" he recently had with the leaders of the group's state and regional chapters: "They need to start reassessing the extent, and I think most of them are, to which they allow representatives of lending institutions to be engaged in the governance structure, particularly in leadership roles, of their regional and state associations."

At Higher Ed Watch, we believe that stronger action is needed. At the very least, the state chapters should be held to the same standards as the national organization -- meaning that lenders should be barred from holding leadership roles and voting on policy issues. And frankly, they should stop accepting student loan bank money as well. Only then will the organization as a whole begin to represent all student financial aid administrators, not just those at schools participating in the Federal Family Education Loan Program.

Stephen Burd contributed to this report.