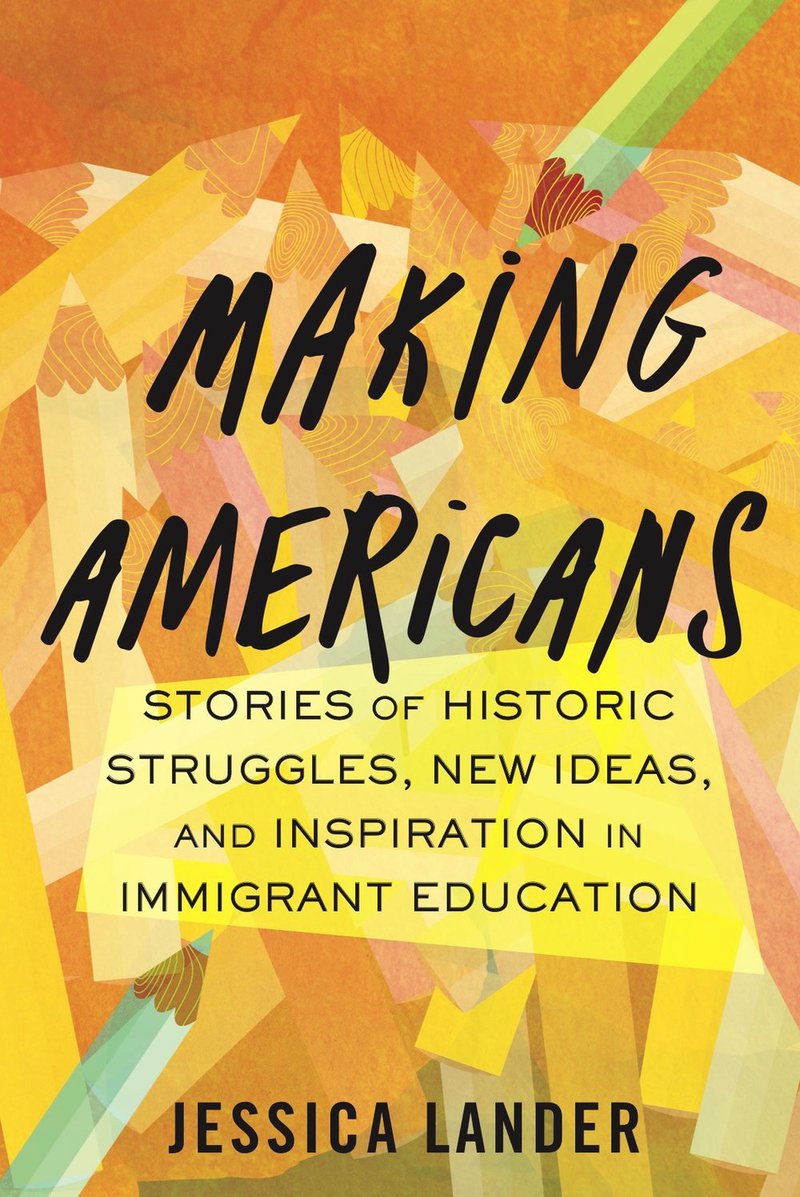 Jessica Lander is a public school teacher of history and civics for recent immigrant and refugee students in Lowell, Massachusetts. I recently spoke with her to learn more about her new book and ideas to strengthen the educational experiences of immigrant students. Our conversation has been edited for clarity.

Leslie: Tell me a bit about yourself, your background, and your role in education.

Jessica: First and foremost, I'm a teacher. I've been a teacher for the last decade, and since 2015, I have been teaching immigrant and refugee students from about 30 countries in Lowell, Massachusetts.

Leslie: Congratulations on the release of your book, Making Americans: Stories of Historic Struggles, New Ideas, and Inspiration in Immigrant Education. What was the impetus for writing the book? And who was the audience that you had in mind when you started writing the book?

Jessica: The inspiration for the book was my extraordinary students. I feel so honored to be able to work with them and learn from them every day. I’m so inspired by them and it made me think about how our schools can do better by our students. I also wanted to explore how we could collectively reimagine education to really ensure that all of our immigrant students thrive.

I think if we're to really reimagine the education of immigrant students, we're going to need everyone: educators, researchers, policymakers, community organizations and community members. And so the book is really geared towards everyone. I hope it provides rich ideas for educators and policymakers and researchers to think about. I also think that even for the people who are maybe not interested in education; it is important to remember that 98% of us in the country trace our origins elsewhere. And so, for many people, the stories in this book will likely have a connection to stories in their own family's history.

The book is organized around the idea of belonging and what I'm suggesting are eight essential elements of belonging that I pulled from what I learned from my students, from the teachers I met across the country, and from the people at the heart of the eight historical events that shaped immigrant education featured in the book.

And I present these elements of belonging as the titles of each chapter which are: 1) Opportunities for new beginnings, 2) supportive communities, 3) assurance of security, 4) chances to dream, 5) committed advocates, 6) recognition of students’ strengths and assets, 7) acceptance for who students are and where they come from, and 8) opportunities for students to develop their voice—and valuing those voices

I think it would be so powerful to see and work with schools as they think about how they can help nurture these eight elements of belonging because I think you need all eight. For example, supporting immigrant students is not just about language acquisition, though, that's important. It's going to be all these other things too to make sure that students feel that this is their home, that they're valued, that their voices are important, that their histories and cultures and traditions are important. And if they feel that sense of belonging, then I think we can create schools that will really help students thrive.

Leslie: How did you decide where to go? Who to speak to? And whose stories to focus on?

Jessica: I chose to profile seven programs that really spoke to me in a range of different ways. Each is doing something creative and different, but it’s not that they are perfect because they are also working through challenges. For example, the ENLACE (Engaging Newcomers in Language and Content Education) program in Lawrence, Massachusetts which is a newcomer program within Lawrence High School. One of the things I find really powerful is their deep commitment to collaborative family engagement, and the ways in which they're partnering with the families of their children, both in academics, but also in recognizing that the schools can be bridges to communities.

There’s also Guilford, North Carolina, where there are 126 schools, some rural, some urban. One school is an entirely newcomer school, and another school might have five English learner students. For the book I shared the story of how Mayra Hayes, who's the head of the EL department for Guilford schools, implemented a new approach to newcomer instruction whereby instead of simplifying language, instruction would include complex language in a structured way so that they could really grasp and master it. Here, Mayra built a powerful team and was able to convince teachers across all 126 schools to rethink their instruction, with tremendous results. Her team did powerful work to support teachers, holding both large scale professional development and weekly meetings, going in one-on-one when a teacher was struggling, modeling lessons for them, co-teaching if needed, and helping to find resources. She and her team were there every single step, meeting each teacher where they were. And that's how they were able to create systemic change across this district. And they're seeing tremendous results in reading, writing, math, and science scores.

And then there are schools like the Global Village Project (GVP) in Georgia, which is a tiny school for refugee girls who have spent many years outside of school, what we call SLIFE students. And unfortunately the reality is that if you're a 16 year-old and you've never been to formal schooling and you show up in the US, you're put in maybe 10th or 11th grade, making it very challenging for you to succeed academically. This school has created a community of support around these students where they are teaching material from kindergarten through eighth grade, condensing into three years working with each student as they need it. They also have a huge community of volunteers who come in and work one-on-one with students. Another hard part for our oldest SLIFE students is that the materials they are provided are often geared for kindergarteners and do not respect the maturity of these young people. These students have lived as adults and carried adult responsibilities, usually for many years, and GVP is able to hold both of these identities, it respects and honors that maturity, while also helping them succeed academically.

Leslie: Can you tell me a little bit about the historical events you cover in the book that helped shape today’s approach to immigrant education?

Jessica: I chose eight moments in history that were powerful for having transformed our schools, but have not really been known. These are stories of Supreme Court cases and federal laws, but they are at their heart stories about people.

For example, I include the story of Robert Meyers, who was a teacher in a parochial one-room schoolhouse in rural Nebraska in 1920, who on a May afternoon, was arrested for teaching an 11-year-old boy the Bible in German during recess. And that is because in almost half the states in the country at that time, there were language laws preventing schools from teaching foreign languages, and particularly in many cases teaching German. But Robert Meyer did not back down after he's arrested, and he took his case up through the courts, all the way up to the Supreme Court, and the Supreme Court came back with a ruling saying that students have the right to acquire knowledge as teachers have the right to teach, and it enshrines the protection for students to learn languages other than English.

I also spoke with Sylvia Mendez while doing research for the book whose family was at the heart of the court case Mendez v. Westminster, which was used as the basis to end school segregation in California in 1947. Sylvia’s family sued the school district after her and her brothers were told they had to go to the “Mexican school.” Their case worked its way up through the courts until it reached the Ninth Circuit where the Mendez family won thanks in part to the support they received from a slew of amicus briefs including one from the NAACP, written by Thurgood Marshall.

And then of course, there's the story of Plyler v. Doe in 1982, and I was able to speak with Alfredo Lopez, who's one of the children of the four families who sued Tyler Independent School District in Texas. That chapter opens with a story that Alfred shared with me of the night before the court case where his parents packed the car and filled it to the brim with their belongings. The next morning before the sunrise they woke up their children, put them in this car, and they drove two blocks to the Tyler District Court federal courthouse. They knew that in suing Tyler schools and walking into that courtroom, they were risking immediate arrest and deportation. And that’s why they packed the car the night before. It's the bravery and courage of those four families that is the reason undocumented students have the right to K–12 education today in our public school system. All of these stories are just so powerful and have had such a tremendous impact on our schools.

Leslie: In your experience, what is the biggest barrier in providing immigrant students with an equitable education?

Jessica: There are a few different points that I want to hit on. One is: every educator I talked to wants to do best by immigrant-origin students and wants to help them thrive, but a lot of teachers and schools don't know how. And what I found is that there are powerful, creative experiments being conducted throughout the country, but what we don't have is a way to bring them together to allow schools and teachers to learn from each other. So it’s not that the solutions aren't there, it's about creating space for educators to connect with one another to share these solutions and learning how to tailor them to what each community needs.

Another barrier is that sometimes folks might equate English language proficiency with intelligence. This risks setting expectations for our students much lower. It risks not seeing all the tremendous strengths that our students bring, and focusing instead on the deficits. This means focusing on the fact that they don't yet have the English proficiency versus the fact that they have tremendous grit and perseverance, and that they are cultural and linguistic translators every day for their families. These students bring a wealth of perspectives of histories and cultures and politics having lived in multiple countries. But it can be easy to forget about all those other strengths if a school is solely focused on English proficiency. And students internalize those low expectations as well. So for me it's about how we can create schools that honor and tap into and invest in the many, many strengths of our students while also supporting them on English proficiency.

Leslie: If people take one thing away from your book, what would you like that to be? And how did you come up with the Making Americans title?

Jessica: The title is intentionally ambiguous about who is doing the making. It reflects, of course, more than a century of efforts in this country to shape newcomers into Americans— by governments, communities, educators, and many others, based on their views, their philosophy, and their power. But the key message is that every newcomer is the rightful author of their own American identity.

I want people to take away that immigrant-origin students enrich all our schools and all of our communities. And they bring a wealth of strengths and perspectives and knowledge and skills. And I hope that through stories of the past, stories of the present, and stories of the personal, that the reader finds lessons from the innovative educators across the country, from my amazing young students, and from the courageous individuals who have shaped history. And these lessons can help us create schools and communities that are welcoming, vibrant and inclusive, and that nurture a strong sense of belonging.