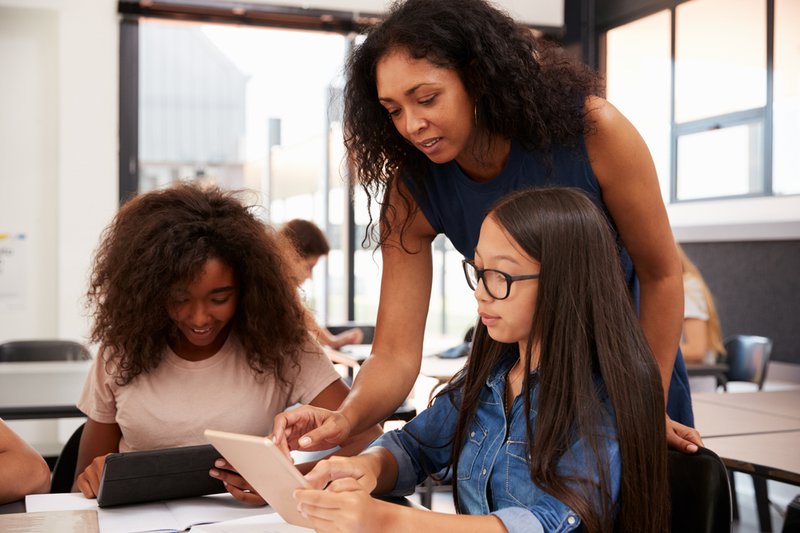 Dual language immersion (DLI) programs, which are designed to teach students in two languages, are having a meteoric rise. On the surface, the growing number of DLI programs across the country is a welcome change—one that advocates and researchers have championed for decades. Beneath the surface, though, there’s a growing problem: English learners (ELs), who stand the benefit the most from these programs, are getting left behind.

An assistant professor at The University of Texas at San Antonio, Kathryn I. Henderson believes the expansion of DLI programs has become a social justice issue. She has studied how ELs are selected for and placed in DLI in Texas, a state where districts have implemented a number of dual language initiatives, generally for ELs. She’s also studied this selection process in Utah, a state that is known for its unique state-level approach to DLI that traditionally targets English-dominant speakers. Though each state boasts different types of DLI programs, these programs all share the goal of fostering more bilingual and biliterate learners.

I invited Dr. Henderson to discuss her research on the expansion of DLI programs. In our conversation, edited for clarity and brevity, we discussed what the popularity of DLI programs means for ELs, how local stakeholders can inadvertently shut these learners out of these programs, and what stakeholders at all levels can do to keep ELs at the center of expansion efforts.

Q: In your research, you’ve explored educators’ views about who DLI programs should—and shouldn’t—serve. What have you found?

A: There are different ways that educators talk about who DLI programs serve and who they should serve. One common discourse, which I heard in both Utah and Texas, is that DLI programs should serve only the highest performers and not students who are thought to be weak linguistically or academically. In fact, some teachers voiced the concern that DLI participation might cause students who they perceived as “low achievers” or “strugglers” to fail to gain proficiency in any language.

I also found that teachers’ language ideologies, or their beliefs about language and how it develops, inform how they view and talk about who should participate in DLI programs. Educators who believe that bilingualism and multilingualism are common and normal are likely to position Spanish-speaking ELs as fit for DLI programs, including French DLI programs such as the one I observed in Utah. On the other hand, educators who believe in sequential bilingualism, or the idea that students must first learn one language before they can learn a second one, tend to say that it is too hard for ELs to participate in DLI programs—a belief that is not supported by the research.

Q: In what ways do teachers and school leaders—and their language ideologies—act as gatekeepers to DLI programs?

A: You can have policies that are inclusive at the national, state, or local level—but these policies get interpreted and implemented by teachers, principals, and ESL specialists in ways that are influenced by their own beliefs. Local stakeholders, therefore, all play a role in promoting DLI programs in ways that are either inclusive or exclusive.

One of the best examples of how stakeholders can be exclusionary stems from my research of a French-English DLI in Utah, which was offered in a school that enrolled Spanish-speaking ELs. Some of the local stakeholders who were implementing the French DLI program felt that ELs wouldn’t do well in the program and that they would be better served by an English as a Second Language (ESL) pullout model, wherein ELs are pulled out of mainstream classrooms for specialized English language instruction. As a result, they didn’t promote the DLI program to the Spanish-speaking families at the school. And in cases where teachers had the opportunity to make recommendations about who should be included, they chose not to recommend these students. Ultimately, ELs were excluded from the program.

But I have also met educators in Utah who tried to push against the exclusivity of the DLI programs. One teacher was very vocal, saying that the French-English DLI program would serve Spanish-speaking ELs very well and, in fact, these students performed the best in her class. She disrupted that exclusionary narrative. I think that teachers, in particular, are in a position of power to promote inclusive discourses in their school community.

Q: DLI programs are increasingly marketed as “enrichment” models of bilingual education. Is there a danger in doing this?

The word enrichment commonly surrounds the discourse around dual language. In some schools I’ve researched, in fact, the word enrichment has been written into the model. As a bilingual education advocate, I like that bilingual programs are being viewed positively. But doing so can create some tension. When you sell DLI programs as superior programs, which I would argue they are, you have to be very careful that they don’t get implemented in ways that exclude certain students.

For example, it’s important to carefully consider the language that is adopted and who the DLI program is going to serve. To that end, it's necessary to ensure that parents representing different groups of learners, including ELs, have a say in what language is selected and implemented. Consider the decision in Utah for a school to adopt a French DLI program rather than a Spanish program: Who are the influential stakeholders who got to make that decision?

Q: DLI programs can be implemented by top-down and bottom-up approaches. Is one approach better than the other?

A: In my research, I have critiqued top-down approaches because I think that decisions made by superintendents or state-level policymakers to implement DLI programs do not always take into account the voices of local teachers, families, and, importantly, the language needs of ELs. What's more, when policies are instituted without first ensuring proper professional development or buy-in from local stakeholders, it can result in DLI models that don’t become a reality in practice.

But that’s not to say top-down approaches are bad. Bottom-up approaches, where DLI programs are initiated by local families, have traditionally not had support from the top. Parents had to fight to have their asset-based language programs validated and supported. In an ideal situation, you have synergy and open communication between top-down and bottom-up policy processes. I think there should be an adaptive model, which includes intentional feedback cycles between district officials and the teachers and families impacted by district policies. Implementation of DLI programs requires time, thoughtful dialogue, and constant reflection about what is the best way to serve local students and families.

Q: What advice do you have for policymakers and decision makers who want to ensure equitable access to DLI programs for ELs?

The number one thing to consider is ensuring that DLI programs are chosen and implemented with critical consciousness. Right now, dual language education has the goals of bilingualism, biliteracy, and biculturalism—but there is this new fourth pillar that is being introduced, which asks that we implement these programs critically for the students that they were originally designed for; that is, ELs.

It's an equity issue that students who speak languages other than English in their homes have access to DLI programs. It would be incredibly unfair for education models that promote bilingualism and multilingualism to become popular, but students that come from bilingual families are not promoted to participate in those the programs. It’s especially unfair when you consider how many bilingual families have fought to get these programs in their schools to better serve ELs. Therefore, we must make sure that students who have language practices other than English in their home are the first to have access to the growing number of enrichment language programs.

To learn more about Kathryn I. Henderson’s work, click here.