What's Been Cut: The Story of the Child Parent Centers

Consider an education program so effective that its impact can be measured 19 years later, so well-studied that it can be backed up with decades of scientific evidence on children's improved skills in math and reading, and so impressive to policymakers that it continues to be championed around the country 40 years after its launch. 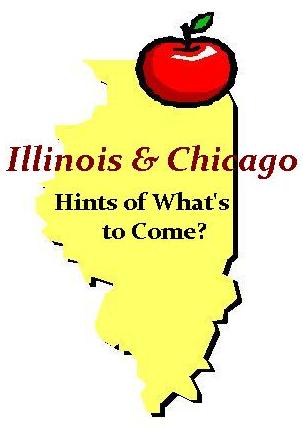 These are the superlatives that come with Chicago's Child Parent Centers. So you might figure they're flourishing as part of the Chicago Public Schools' early childhood programs, right? Not so. Their numbers are dwindling. In the mid-1980s, there were at least 25 CPCs serving more than 1,500 children. By 2006, there were 13. Today, 11 are still open, according to the Promising Practices Network. Enrollment in 2009, as reported by the Chicago Public Schools, is down to 670, less than half of what it once was. It now represents just 2 percent of the system's total preschool enrollment.

The distressing story of the CPCs needs to be told. In this series, we have examined Illinois's early childhood framework and its Preschool for All program, as well as U.S. Education Secretary Arne Duncan's record in Chicago. Both offer helpful lessons for structuring and funding early childhood programs. But the CPCs offer some of the strongest lessons of all, and their closures send a warning about how difficult it can be to sustain the programs that have been shown to do the most good. It's a shame that even in an environment brimming with early childhood advocates, the CPCs haven't been able to gain ground. And it begs the question: If Chicago can't make this happen, who can?

Arthur J. Reynolds, an education professor at the University of Minnesota who has studied the CPCs for decades, sees many dimensions of the CPCs that should be replicated, and we agree. CPCs:

The full sum of these features, Reynolds stresses, produces the strongest gains for children. One of his recent studies, published in the Archives of Pediatric & Adolescent Medicine, has shown that 19 years after attending the centers, CPC enrollees were still doing significantly better than similar children who didn't attend on measures as varied as high school graduation rates, career prospects, and emotional well-being. Sen. Ted Kennedy (D-Mass.) has called the Child-Parent Centers "groundbreaking." In the late 1980s, when two dozen centers were running, the Chicago Tribune lamented that their numbers were too few. Mayor Richard Daley, Reynolds said, wanted to expand them across the city.

So why cut what's clearly working? The culprits vary depending on who you talk to. Shifts in budget priorities within the school system and across the state played a big role, along with changing neighborhood demographics that have complicated the CPC's mission of helping low-income children. 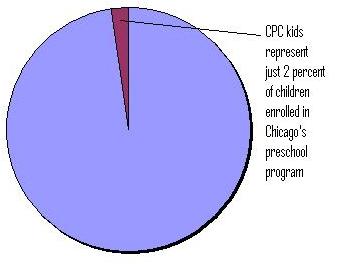 Reynolds lays much of the blame on the push to end "social promotion" - the practice of advancing children to the next grade despite failing grades - that marked the Chicago Public Schools in the late 1990s and early 2000s. This was when Paul Vallas and then Arne Duncan were leading the schools. "It was a decision made by Vallas and continued by Duncan," Reynolds said. "It ended up being a huge mistake." The school district spent "hundreds of millions" on remedial efforts that had little effect on students' progress, he said, siphoning money away from early education.

Bowman, who arrived as CPS's chief early education officer in 2004, gave a couple of reasons for the closing of centers. One, she said, was the newfound emphasis on literacy instruction that came in the early part of this decade before she came on board. As officials looked at how to allocate the schools' money, Bowman said, "The Title I funds for literacy grew, and the Title I funds for early childhood shrank."

In addition, the comprehensive services demanded by the centers - which had expanded to full-day programs, and included head coordinators and community representatives -- began to look too expensive given the changing populations they were serving.

The actual cost per child of running a CPC has varied over the years, depending on services offered and whether the centers ran full- or half-day programs. In Reynolds' cost-benefit analysis in 2001, the program cost $6,730 per child (which Reynolds says is $8,700 in 2007 dollars). But Bowman said that when she arrived, they cost $17,000 per child.

"I frankly wouldn't have worried unduly about that," Bowman told us, "because the children we were serving were at considerable risk and it would have been good use of the money." But it was getting harder to be sure of exactly whose children were, in fact, at considerable risk. Inner-city neighborhoods were starting to gentrify, she said, which meant that the demographics of the neighborhoods around Title I schools included fewer families in poverty. Because the program is structured to be available to any family in a Title I district, some families who wouldn't qualify as poor were enrolling their children in CPCs.

"Arthur makes a very good case that the CPC requires all of its pieces," Bowman said, referring to Reynolds' research. "And he may be absolutely right. But since I was stuck having to de-fund some of it, I thought I'd feel better if I was de-funding the things that gave us the least bang for our buck" in terms of serving the most at-risk children.

Paula Cottone, deputy chief early childhood officer who taught in a CPC many years ago, stressed that closing some of the centers did not mean that children went without preschool. They were sent to state-funded pre-K or other centers in the Chicago system. "It wasn't like, we're closing, you're gone," she said. "All the children who were left were transitioned from one to another."

Still, the closures have released bitter feelings. A 2005 article in Rethinking Schools reported parents protesting the closure of 8 centers on the south and west sides of the city. David Kirp interviewed several CPC teachers for his book, The Sandbox Investment: The Preschool Movement and Kids-First Politics. One was Barbara Tchaou, then a head teacher for Von Humboldt CPC who eventually left. "They are amputating every part until soon the heart will have disappeared and they can get rid of it entirely," she told Kirp.

The remaining centers no longer offer full-day programs, and they are not alone. Bowman said she has had to cut the hours for other preschool programs, too, partly because the state's funding for Preschool for All covers a 2.5-hour day. As Catalyst Chicago reported a few years ago, this has led to a struggle for working parents, whose schedules do not enable them to come get their children after just a few hours.

Today the early childhood program at the Chicago Public Schools offers parents two options if they want full-day care. They can pay a subsidized rate to send their children to community-based "partner centers" that provide 2.5 hours of free preschool instruction within the context of full-day child care. Or they can pay about $9,000 a year for the schools' tuition-based programs.

As the economy worsens, other municipalities around the country are making similar choices. In fact, as reported in the Boston Globe last week, Boston and other towns in Massachusetts are considering cuts in full-day kindergarten, not just pre-K.

We recognize that the pot of money for early childhood programs is not bottomless. Budgeting means prioritizing and making tough choices. Thoughtful policy makers must balance the need to serve more children with the costs of creating high-quality programs. The ultimate goal, however, should be to reduce the need for such compromises by increasing funding for pre-K programs to the same level as funding for K-12 students.

Without this commensurate funding, Chicago has had to walk a tightrope over the years. Enrollment in preschool programs is, indeed, up, and yes, the Illinois system gets high marks on NIEER's benchmarks of quality. But because there is little research yet on the impact of the state's Preschool for All program, it remains to be seen whether students in that program will show the same kinds of gains that have come with the Child Parent Centers and their parent-involved, comprehensive services.

As Reynolds warns: "If we water down the programs, we can't get these results."