Why the world suffers when there aren’t enough Japanese women in the field. 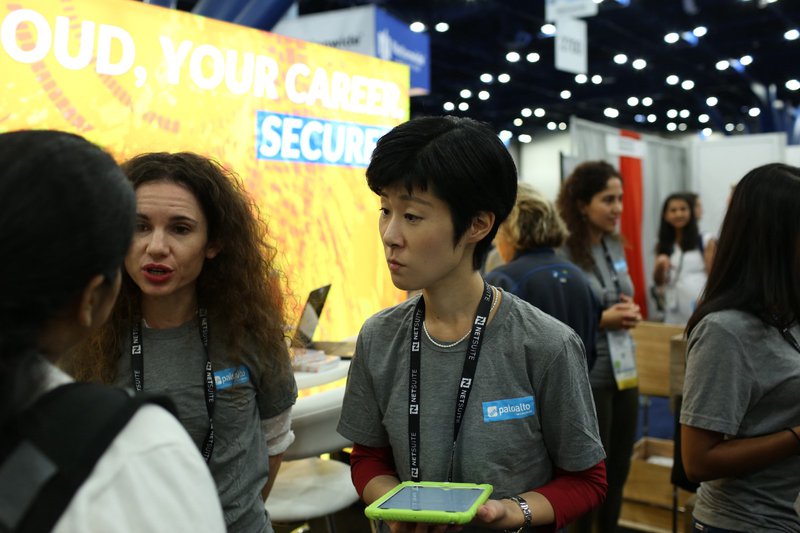 Where were all the Japanese women?

I was asking myself that question while participating in the Grace Hopper Celebration of Women in Computing conference last month, one of the largest global conferences for women in IT.

At the conference, I spoke with dozens of female college students majoring in computer science and cybersecurity in the United States. About half of the women I spoke with were American students, while the other half were students from India and China who were studying in the U.S. and ultimately hoped to stay and work in cybersecurity after graduation. But during my time at the conference I found myself asking, where were the women from my home country, Japan?

Seven years ago, I moved from Japan to the U.S. to pursue my graduate degree in international relations and economics at Johns Hopkins University and later conducted research on Japan–U.S. cybersecurity cooperation as a Fulbright scholar. I’ve also worked at the Japanese Ministry of Defense, a U.S. think tank that specializes in international security, and at Japanese and American tech companies. During this time, I’ve met few Japanese women working in the cybersecurity and tech industries overseas.

I began to investigate why and found a few factors that may explain why more Japanese women aren’t pursuing cyber jobs. It’s important now, more than ever, for women to enter this field.

First, some demographic context: The number of Japanese students matriculating in overseas universities and graduate programs has continued to decrease since 2004. This could be partly attributed to the decline in the number of children born in Japan since the 1980s. On the other hand, some observers, such as Aoyama Gakuin University Professor Kazuo Ogoura, have questioned whether the Japanese have become more introverted as Japan’s economic prosperity and affluence has grown, and thus are less inspired to seek new frontiers overseas.

Perhaps this is why I rarely see Japanese men or women (particularly the latter) at international cybersecurity conferences outside of Japan, particularly in the U.S., U.K. and France. There are also practical and cultural reasons for this: It is often challenging for non-native English speakers to draft proposals and deliver complex technical or international security conference presentations in their non-native tongue. Additionally, Japanese culture traditionally discourages people to speak up in a meeting to challenge a different opinion or idea because it disrupts group harmony, a priority in Japanese culture. Based on my own experience, the pressure of this tradition is even greater for women.

This lack of visibility is problematic because Japan is losing out on opportunities to provide and learn from different perspectives in global cybersecurity discussions. And it needs to be part of this global dialogue more than ever. That’s because Japan is hosting the Tokyo Summer Olympic Games in 2020, which prompted the government to publish the Japanese Cybersecurity Strategy in 2015, a vision about how to secure Japan and prepare for Tokyo 2020 for the next three years. One of its key arguments is that top-notch cybersecurity professionals need to be global and should play an active role beyond national borders since cybersecurity is a global challenge. As of 2014, Japan had approximately 265,000 information security professionals (160,000 of this group reportedly need more training) and a shortfall of roughly 80,000 professionals.

Like the rest of the world, Japan’s cybersecurity workforce shortfall is one that could hurt the country’s security in the long term. The Japanese government is well aware of the risk and finding ways to address the challenge.

That’s one reason why Japan’s efforts to cultivate a larger and global cybersecurity workforce will soon need to include diversity discussions like those happening in the U.S., determining how to recruit and retain groups that have been underrepresented in the cybersecurity workforce — like women. This is a place where Japan could be a global leader, if the private and public sectors make some of the necessary changes together, learning from the best practices of other nations and creating some of their own.

Still, it will be tough to remove some of the obstacles that are holding back women (and men) from the global cybersecurity workforce, and it won’t happen overnight. Japanese cybersecurity professionals will still face a language barrier and encounter cultural differences when joining international cybersecurity discussions and conferences. But joining in these discussions will ultimately help Japan, and the world, become more secure.

It can be scary to some women — particularly Japanese women — to be the minority in a conference room. It might require courage to speak up at a meeting. But as cybersecurity challenges grow increasingly complex and global, these perspectives representing different cultures and backgrounds will become even more important and valuable to the discussion. Think of yourself as an ambassador, paving the way and bridging the gap for other people from your community, country or culture. And you’re not alone; I will do my part and look forward to seeing you at future conferences, or hopefully, as a colleague.