The White House's Cybersecurity Priorities for 2016

What Can We Expect and What Can They Deliver? 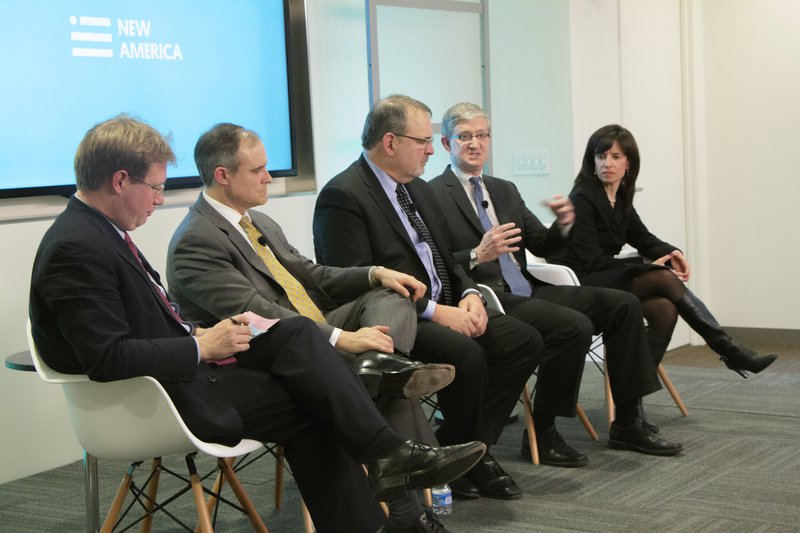 What will President Obama's legacy look like on cybersecurity? With the Obama Presidency in its last year, the budget proposal passed to Congress this week signals the Administration's priorities for the final year.

Join New America as the White House's top cybersecurity advisors, Michael Daniel, Edward Felten, Tony Scott, and Phyllis Schneck join Ian Wallace to expound on the Administration's cybersecurity priorities in its final year and to discuss the opportunities and challenges that lie ahead.

Dr. Phyllis Schneck serves as the Deputy Under Secretary for Cybersecurity and Communications for the National Protection and Programs Directorate (NPPD). She is the chief cybersecurity official for the Department of Homeland Security (DHS) and supports its mission of strengthening the security and resilience of the nation's critical infrastructure. Schneck came to DHS from McAfee, Inc., where she was Chief Technology Officer for Global Public Sector. Schneck served eight years as chairman of the National Board of Directors of the FBI’s InfraGard program and founding president of InfraGard Atlanta. Schneck received her Ph.D. in Computer Science from Georgia Tech.

Michael Daniel is a Special Assistant to the President and the Cybersecurity Coordinator. In this position, Michael leads the interagency development of national cybersecurity strategy and policy, and he oversees agencies’ implementation of those policies. Michael also ensures that the federal government is effectively partnering with the private sector, non-governmental organizations, other branches and levels of government, and other nations. Prior to coming to the National Security Staff, Michael served for 17 years with the Office of Management and Budget (OMB). Michael played a key role in shaping intelligence budgets, improving the management of the IC, and resolving major IC policy issues including cybersecurity, counterterrorism spending, and information sharing and safeguarding. Michael received a Bachelor’s in Public Policy from the Woodrow Wilson School at Princeton University, and a Master’s in Public Policy from the Kennedy School of Government at Harvard.

Edward W. Felten is Deputy U.S. Chief Technology Officer at the White House. He is on leave from Princeton University, where he is the Robert E. Kahn Professor of Computer Science and Public Affairs, and the founding Director of Princeton's Center for Information Technology Policy. In 2011-12 he served as the first Chief Technologist at the U.S. Federal Trade Commission. He is a member of the National Academy of Engineering and the American Academy of Arts and Sciences, and is a Fellow of the ACM. In 2004, Scientific American named him to its list of fifty worldwide science and technology leaders.

Tony Scott is the third Chief Information Officer of the United States, appointed by President Obama on February 5th, 2015. Prior to his position in the White House, Mr. Scott led the global information technology group at VMware Inc., a position he had held since 2013. Prior to joining VMware Inc., Mr. Scott served as Chief Information Officer (CIO) at Microsoft from 2008 to 2013. Previously, he was the CIO at The Walt Disney Company from 2005 to 2008. From 1999 to 2005, Mr. Scott served as the Chief Technology Officer of Information Systems & Services at General Motors Corporation. He received a B.A. from the University of San Francisco and a J.D. from Santa Clara University.

Ian Wallace is the  Co-Director of New America’s Cybersecurity Initiative. His research is mainly focused on the international security and military dimensions of cybersecurity policy. Ian joined New America from the Brookings Institution where he spent two years in the Foreign Policy Program as a Visiting Fellow for Cybersecurity. He was previously a senior official at the British Ministry of Defence (MOD). From 2009-2013 Wallace was as the British Embassy, Washington’s defense policy and nuclear counselor. There he helped develop new UK/US mil/mil cyber link at both the operational and policy levels. Before joining the embassy he was a fellow at the Weatherhead Center at Harvard University where his research included working on the military implications of cyber capabilities.