The Future of Human Wellbeing in an Automated World 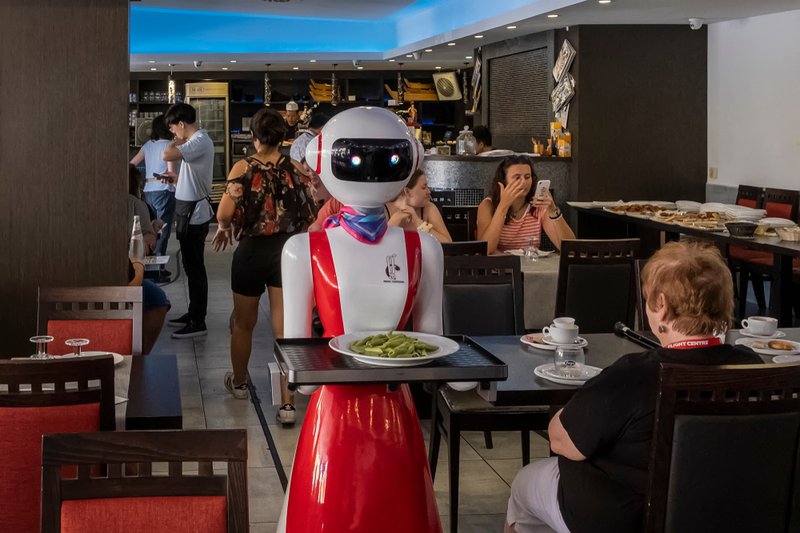 I have to admit, over the past two years as I’ve reported and researched work stress and where we may be headed in the future of work for our latest Better Life Lab podcast season, there have been times I’ve despaired. I’ve had dystopian Blade Runner visions of an increasingly unequal future, with the gulf between winners and losers, the powerful and the powerless, grows so wide that democracy, much less a healthy society, would be hard pressed to survive.

But with every challenge to creating an equitable, healthy human future of work and wellbeing we’ve explored - and there are many - I’ve been inspired by stories of hope, movements for change, and bright spots of possibility.

For this final episode of the season, what has become clear to me is how important it is not only to have the facts, data, research, stories and historical perspective, but belief. Belief that things can be better. Belief that we can find the will and the way to work together to make better choices that will benefit all of us. Belief, in truth, of what’s best in the human spirit.

In past episodes, we heard from workers and advocates about how we need to help workers build their voice and their power. On this episode, we talked with three people from very different sectors who also have important roles to play in shaping that future - in business and on Capitol Hill. My guests included Congressman Jim Himes, D-Connecticut, House Select Committee on Economic Disparity and Fairness in Growth, private equity investor Warren Valdmanis, a partner at Two Sigma Impact, a firm dedicated to investing in companies that create good jobs, and Zeynep Ton, MIT professor and president of the Good Jobs Institute.

As I asked each how we shape a better future of work and wellbeing. What struck me most is that they all wound up talking about belief.

For Himes, he’s confronting political ideology and an economic orthodoxy that gained a foothold in the early 1970s, - the belief that the market, not government, could solve most if not all of society’s challenges and ensure human wellbeing.

While the market does create “a lot of new opportunities,” Himes said, it’s also, at the moment, producing “terrible outcomes for most people” and concentrating wealth and power in the hands of a very, very few. “As a Democrat, I’m not going to tell you that the Medicare, the Social Security system, Medicaid, all of those various safety net programs, are 21st century models of efficiency. They’re not. So let’s focus on making them better, more efficient. But let’s agree on the value that in today’s society, we ought to be comfortable with nobody living in abject poverty.”

And that will mean effective government intervention in the market, he said, to guarantee a “minimum level of dignity,” including raising and ensuring fair wages, fair scheduling, a robust safety net, tax policies that no longer incentivize investing in technology, factory and software rather than in people, as they currently do.

“My gosh, let’s figure out a way to give every American access to decent health care. And by the way, let’s figure out how to give every American access to some form of child care. Both of those things have the virtue of satisfying our moral sense, but they’re also just cold, hard nosed, economically smart. You know, a single mom who doesn’t have good access to child care is not going to be in the labor force,” Himes said. “I get a little animated about [Universal Basic Income.] Let’s talk about it. Let’s think about it. Let’s talk to Andrew Yang about it. But son of a gun, in 21st century America, we ought to have a safety net that doesn’t look like something out of Dickens.”

And despite the bitter political polarization in the country, on the air waves and in the Halls of Congress, Himes believes his vision will prevail. He’s an optimist. “Lincoln said it: public sentiment is everything,” Himes said. “And public sentiment is very, very much on the side of, doing better by our most marginalized people.”

For Valdmanis and Ton, they are taking on what they call the “false belief” among many CEOs and business leaders that bad jobs are just part of doing business, and that cutting labor costs is just what you do in order to make quarterly earnings statements look good for investors and shareholders.

“We have seen a long term trend in America towards trying to slow down the workforce. Companies cutting jobs. Companies cutting benefits. Companies outsourcing jobs, Valdmanis said. “And I think that this all came from a view in the seventies that American companies were in some way fat, that they needed to trim down. I fear that we’ve done our job too well. The biggest problem is not that companies have too many workers. The biggest problem that almost every company that we talk to has is they don’t have enough motivated, skilled workers to grow. And so my view is that we’re at a really interesting inflection point, and private equity can play an important role in all of this, where we focus on creating good jobs as opposed to cutting workers or their benefits.”

That business belief that people are a cost to be cut rather than invested in, Ton said, is the reason 53 million workers - 44 percent of the workforce - have low-paying “bad jobs” and struggle to make ends meet. But that belief  - which Ton calls “management malpractice” - is not only hurting workers, it’s hurting business, she said. As the unprecedented quit rates show, turnover is high when jobs are crummy. “That drives low productivity, low sales, low profits, which puts companies in a vicious cycle,” Ton said. So bad jobs are bad for companies as well.”

Drawing from research, including that done by Ton, Valdmanis’ organization has come up with a clear definition of a good job:

Valdmanis said the business community needs to believe that there’s a better way and begin taking a longer-term perspective of years, not months and not quarters. “The economy of the future is definitely going to be one with more technology and more robots,” he said. “But what we’ve seen is that technology paired with motivated and skilled humans, that’s where it works best.”

Belief also plays a big role in Jim Plunkett’s new book, End State: 9 Ways Society is Broken and How We Fix it. “There aren’t really any shortcuts here; we have to do the work. But if there’s one force that can help the whole thing along, it’s believing that a better future is possible. When you look at history’s big strides forward, so many of them were propelled by a surge of belief. Belief is so vital to the mechanisms by which change happens: it keeps anger fresh so that it doesn’t wilt into fatalism; it inspires campaigners to argue for unpopular ideas even when it feels risky to do so or when they’re laughed out of the room; and it gets reformers out of bed in the morning as they head off for another hard day grafting at organisational change.”

So, as we draw this podcast season to a close, it’s clear that we have a lot of work to do, together, to create a fairer, healthier and more equitable future of work and wellbeing. And we have to believe it’s possible.

I do. I’ve become a believer.